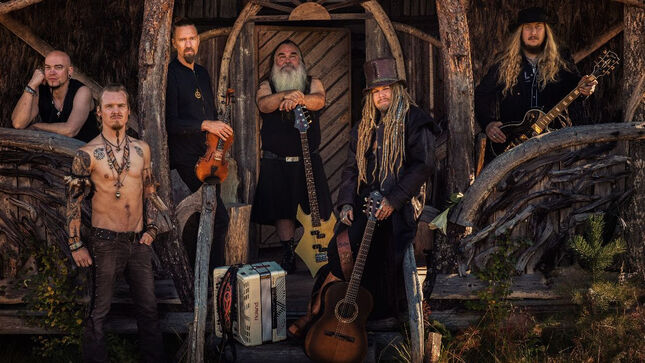 BraveWords: How has the time off the road been for you and the band? For such a prolific touring group, it must be an odd adjustment.

Jarkko: “I myself, and I know many of the other guys in the band, we think that actually playing live is the main thing that you do, and then the albums, that kind of stuff, It’s just there to make albums so that you have something to perform live. And that’s always been very important for us to be able to tour and to play live. That has been, of course, a big part of our lives for 15 years or something. And then suddenly all that is gone. It’s a bit weird.

“Of course being so busy, last year and last spring you realize that, OK, I’m actually going to have some free weekends for myself now. That’s going to be so cool. And then you have like three weekends off enjoying your newly found freedom. And then you realize that this is not really what I want. I want to go back to playing the shows. It lost its appeal quite quickly.”

BraveWords: Particularly in an album cycle year, how have you adapted for promoting the album and getting the word out, considering touring is your bread and butter in that regard.

Jarkko: “It’s a bit weird because with a band of this size you already know like what you are going to do a year from now. You are already booking some festivals even further than that. And then suddenly everything is gone, like you have no plans at all. Of course you have plans, but none of those will ever happen. So we just went to the studio as we were planning anyway. That didn’t change.

“We went to the studio, did the album, and then for some reason it has taken quite long from the label to actually put it out, obviously because of the other releases and whatever. We have been waiting for the album to be released, shooting some videos and just every now and then having a proper rehearsal with the band so we still know how to play (laughs). But other than that it’s been mostly waiting for something to happen.”

BraveWords: Before you joined the band in 2005, how familiar were you with Jonne, Korpiklaani and the rise of folk metal, particularly in Finland?

Jarkko: “Growing up with heavy metal in the ‘80s, being a teenager in the ‘80s, I of course grew up with Black Sabbath, Motörhead, Iron Maiden, W.A.S.P, that stuff. I was of course into that stuff, but then listened to whatever heavy metal came later. Of course Metallica and what came at the time. But let’s say towards the end of the ‘90s, I'd already moved myself more into progressive rock music and that kind of material. I was quite heavily into prog rock at the time. So whatever was going on in 2000, I wasn’t actually that much following the metal world.

"I knew through common old friends that Jonne had a band and knew sort of what he was doing. But when I first got the word that Jonne needed a bass player, then I really had to go and look at what I’m going to be putting myself into. I wasn’t that familiar with that ... I never really connected folk metal at the time. I didn’t even know that there was such a term used as folk metal."

BraveWords: I’m curious what led to the decision for Korpiklaani to record their albums nearly entirely in Finnish in recent years? Was it purely for artistic purposes?

Jarkko: “I think Jonne deep inside wanted to do this music in Finnish, but he wasn’t that happy with his lyrics that he wrote in Finnish and so ended up writing in English. Because English being a more universal language for rock music, it's easier to write material that sounds proper, like it sounds good enough to be a song lyric. And then when he was writing in his own native tongue he was being way more critical towards his own work and he settled on English at that time. I think that was the only reason why it was English originally. Of course it was also a good thing because we hadn’t done ‘Wooden Pints’ in English there probably wouldn’t have been the first recording contract and all that, because that one song in English meant quite a bit at the time. Maybe English was needed for this to happen.

“We started to have Finnish lyrics from an outside writer and we started to use them little by little, more and more. And that felt more comfortable for us singing-wise and basically everything. Jonne was happier singing in proper Finnish. And then we just sort of slowly faded out of English because it was quite natural. We never really thought of it that much, but it was just we were getting good Finnish lyrics and we were using them more and more. I know our previous record label was complaining, ‘you can’t do that in Finnish, it will not work.’ And then they were demanding that you have to have a certain amount of English lyrics on the album. So we always named all our instrumental tracks in English with the English title so that we fooled the record label to think that we have more and more English language from the album than we did (laughs).”

BraveWords: Korpiklaani is known for those energetic live performances and fun, infectious anthems like “Vodka” and “Beer, Beer”. But an album like Jylhä contains some fairly heavy themes and subject matter. Is it a fine line? Balancing heaviness and that feel good quality many have come to love in the band?

Jarkko: “Once the album had been finished and I’ve been listening to it myself, I’ve been thinking about that. And we basically are contradicting ourselves in the sense that when you just listen to the music, you think that there’s something funny and uplifting going on. And then the lyrics are about dead people or some homicide. So it’s a bit weird. But then again, I’m sure the audience will never understand what the lyrics are about. So people can happily dance on someone’s grave (laughs).” 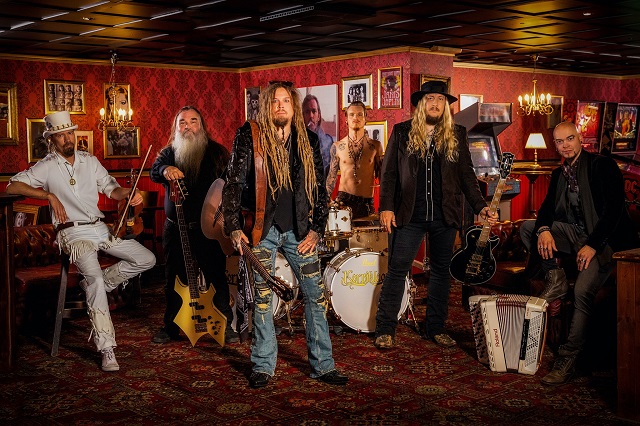 BraveWords: Take us through the addition of Samuli Mikkonen on drums. How do you feel he has meshed with the band?

Jarkko: “Samuli has been brilliant. He’s a brilliant drummer, technically very good. And he has also come up with good ideas. He has musical ideas and he made a difference on the album in the sense that he is close to Jonne. As he'd go to work he’d go to Jonne’s basement studio and he was going through the songs and suggesting things. So he really had an impact on the album, not just playing-wise, but music, writing-wise, even though not particularly like composing stuff, but saying this needs something or this is too much or that kind of stuff. The shows that we were able to play before the lockdown people were commenting that the new guy had brought some new life to the old farts as well (laughs).”

BraveWords: You mentioned Black Sabbath among some of your more influential bands coming up. What would you say are some of those artists that really helped define your own playing and taste?

Jarkko: “Well, Black Sabbath was a big thing and still is. I'm still a huge fan. But I think of all the bands the most important band of this is what I wanted to do was Motörhead. They were the ultimate rock and roll band. I always loved them, loved those early albums that we grew up with that were really, really important. But of course I can’t deny that the first album by W.A.S.P, when I first got that on a cassette, was still quite amazing as well. 36 years, 37 years later, I still love the album. Not a weak song on the album.”

BraveWords: The metal world is still reeling from the loss of Alexi Laiho. As a fellow Finn, how do you assess his impact to the heavy metal world?

Jarkko: “Personally I cannot tell you that I knew him at all. I didn’t. But I can remember he was on the cover of whatever gigantic guitar magazine, like the worldwide guitar magazine. And I’m thinking about that, that’s the moment when I realized that there’s something in this guy. He has actually done something, something that is worth mentioning, because he obviously was a huge influencer. He is one of these people that should be and probably would like to be remembered that he was the guy who got so many people around the world to pick up a guitar and stuff like that. I think that is one of the things and like one of the biggest things that a musician can do or achieve, to get someone to pick up an instrument and start to play and also discover music.

“We were at, I think it was Wacken, that had this early '50s Buick car. I don’t think it was drivable just like as a prop in the backstage area. And our band, we were actually sitting in the Buick there and drinking beer because it was just a cool car to sit in even though it wasn’t moving anywhere. And he actually came to speak with us. Like what are you guys doing? Sitting in a Buick and drinking beer? OK, I’ll join you (laughs).”

BraveWords: Any final words on the album and future of the band? I really think Jylhä offers the best of all worlds and eras for Korpiklaani fans.

Jarkko: “It does, as you say, have both worlds a bit more, because I really enjoy the stuff that we have managed to create. Certain songs have these moods and mood changes in them that I really, really appreciate. And there are some really, really nice melodies and arrangements on the folk instruments. And then at the same time, there’s something really heavy going on in the background, which I do like the opposites even in the same song. We have managed to create these, I don’t know a better word than different kinds of moods. I’m quite happy about the album.”