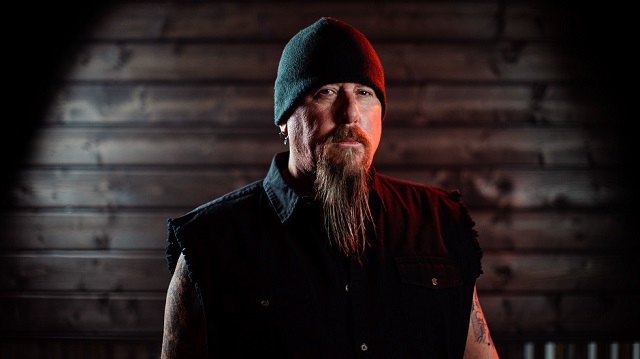 “You should always have something to fall back on” is a famous bit of advice that undoubtedly many and up and coming rockers have heard. But that’s something that singer Kurt Deimer does not have to worry about – as he’s already enjoyed success in various fields (film, real estate, and even oil!)

And as evidenced by the title of his debut EP, Work Hard, Play Hard, the Cincinnati native specializes in hard yet melodic rock, and has already made fans out of some very renowned musicians – Bon Jovi guitarist Phil X (who has joined forces with Kurt) and original Queensrÿche singer Geoff Tate (who Kurt toured with last year, and also duets with on a track).

Both Kurt and Phil spoke with BraveWords correspondent Greg Prato about how they began working together, the stories behind several songs, and also, the band’s upcoming tour with shred legend Yngwie Malmsteen.

BraveWords: How and when did you both cross paths?

Phil X: “Kurt had recorded a bunch of songs and wanted to take it to another level. So, he got introduced to [producer] Chris Lord-Alge in LA. Chris got interested and said, ‘Hey, you know what? Let me take one of these songs.’ And the first song we did together was [a cover of Pink Floyd’s] ‘Have a Cigar.’ So that kind of got our feet wet. But Chris called me, and said, ‘Can you put a bunch of guitars on here?’ I put guitars on ‘Have a Cigar’ and I wanted to do the best job I could – because this was Chris showing Kurt what he could do. And Chris is a wizard anyway, so he makes everything sound amazing. And he got it into Kurt’s hands, and Kurt just loved it. The first time we met, we were shooting the video for ‘Have a Cigar.’ He’s like, ‘Hey, how you doing? I’m Kurt!’ I’m like, ‘Hey, I’m Phil…let’s shoot a video’!”

Kurt Deimer: “I’ll never forget what Phil told me the first I met him, too. He knew I had this demo, and he goes, ‘You’ve got to put your best foot forward right away.’ And then we started revamping and rewriting together…and we can’t stop now. It’s like we’re addicted to Kurt Deimer music now.”

BraveWords: What made you choose to release an EP instead of an album?

Kurt Deimer: “I don’t know that I chose to do an EP – it was more my management said, ‘We’re going to do it as an EP.’ Which, I can justify that…and I can justify it being an album, too – if I have all the material and no filler and I can go eight deep, why wouldn’t I do an album? But we decided to attack it as an EP. It was very difficult to decide what songs we were going to put on this first EP, because we wanted to make an immediate impact and start building a fanbase. That’s what we came up with – Work Hard, Rock Hard. I’ve always been a very hard worker in all the things I’ve done in my life, and I like to rock hard. I like to see other people enjoying themselves rocking hard and my music touching them. So, I think we put a good slate of six together. We came up with those, and we had Geoff Tate do a guest vocal on ‘Burn Together.’ We put a few videos out, and now, we’re going to tour with Yngwie in support of that EP again, and we’re going to introduce some new material, that we think takes it to an even new level.”

BraveWords: Kurt, what was your background prior to this band?

Kurt Deimer: “I started out in music back when I was going to the University of Cincinnati. I was in my late teens and played in a band around town when Afghan Whigs was breaking out of Cincinnati – that’s where I’m from. But I realized I was going nowhere fast, and I was not going to make it too long living the way I was and doing covers. I just decided to shape up and got married at a young age. I started that family thing and have three beautiful sons. My whole twenties was a mess, because I couldn’t figure out what I wanted to do. And I knew that I was very entrepreneurial. So, I ended up getting the Carleton Sheets real estate course, and learned how to buy houses with no money down. And I ended up with like 28 of those, and sold those to start my own oil companies, raised kids, and got to spend the early years with my kids and had the dad life. Got tired of my ex-wife telling me how I had to be and how I had to dress and what I had to do, built these companies, then in 2017 – I own the oil brand Starfire – I went down to Alabama to do a cameo in a movie called Trading Paint. And the next thing I know, they want to cast me – they liked my look and gave me a speaking role, and I’m acting with John Travolta, Shania Twain, and Toby Sebastian. I looked at that as a sign, ‘Maybe this is time to go get back into entertainment?’ And then I got cast in the Halloween movie right after that – I got killed my Michael Myers. I decided to do my own horror franchise, that’s already filmed. It should be coming out this year – Hellbilly Hollow. But that night in Alabama, getting into Trading Paint, kind of put that, ‘OK…now is the right time to get back into entertainment.’ In December of 2018, I was in Alabama working on a couple of projects for film, and a buddy who I had wrote my original demo with, played these three songs for me. But it sounded like a wedding band – because his voice is like a wedding singer. And I said, ‘Let me put my voice on this the way I used to sing back in the day when I was in a band.’ And I just took off from there. We kept writing tunes, I made it to LA, and before I knew it, Chris Lord-Alge is taking me under his wing, and Phil X is my guitar player. It’s been amazing.”

BraveWords: What is the line-up when the band plays live?

Kurt Deimer: “Phil X obviously, Christian Sturba is our bass player, Michale Vassos is our other guitar player and extremely talented vocalist, and Dango Empire is our drummer. And we want to keep our band together. I grew up listening to bands that were all together back in the late ‘70s and ‘80s. I always appreciated seeing those same guys up on stage. I don’t want to be Kurt Deimer with a bunch of session musicians. I want to be a family.”

Phil X: “We really put a lot into putting this band together and it just feels great. We did 45 shows with Geoff Tate in the fall and we just grew – not only as a band musically, but as a gang. The brotherhood. It was really awesome. And then like Kurt was saying, when we were putting the band together, I knew someone who could sing awesome – and that’s Michale. I just knew he could come in and nail everything. And, he’s a great guitar player. So, the band is just killer. We’re so excited.”

BraveWords: Phil, you won’t have any trouble balancing working with Kurt and with Bon Jovi?

Phil X: “Sometimes it’s a bit of a puzzle. But even in the beginning, Kurt was like, ‘Look, I really want you to be in the band.’ And this was when I didn’t want to be in another band. But when we started writing together, that’s when I thought, ‘Man, I really got to do this.’ And so far, he goes, ‘Hey, I know you’ve got Bon Jovi. If you go play with Bon Jovi, I’ll go work on my movie, and then we’ll come back together and do some shows.’ And that’s exactly what’s happening – in April I’m doing Bon Jovi dates and then in May I’m doing Kurt Deimer dates. For me, it’s like I get to keep going. It’s not like I don’t take the ‘platform’ into consideration. I’m like, ‘I’m doing these gigs…and then I’m doing these gigs.’ And if I’m playing guitar, I’m a happy guy.”

BraveWords: Let’s discuss the three songs that have been issued as videos – “Have A Cigar,” “Naïve,” and “Burn Together,” the latter of which features Geoff Tate.

Kurt Deimer: “‘Have a Cigar’ is the song that kind of brought us all together. That’s the song Chris wanted to really show me what he could do something on. We had thought about doing that as a cover, and he said, ‘I’ve got the idea,’ and that’s how he brought me and Phil together – because he hired Phil to do the guitar in the studio on it and show me what he could do, and Phil didn’t want to let Chris down. I hear this guitar solo, and I’m like, blown away. And then I finally find out it’s Phil, we go to shoot the music video, and that’s the first time I met Phil – and our relationship blossomed from there. Geoff Tate we got involved in that ‘Burn Together’ video because when my management was booking the tour with Geoff, I realized, ‘Now I’m going to meet Geoff Tate. The guy who was on MTV with the orchestra, doing ‘Silent Lucidity’!’ Then the next thing you know we’re going on tour. I appreciate what he’s done for me very much. And then ‘Naïve’ is a big single off our first EP. What we’ve done is shoot that along with ‘Burn Together,’ and there’s another video that hasn’t come out – a trilogy – so it kind of tells a story if you watch them all together. But the prequel has not come out yet – that will come out in the future.” 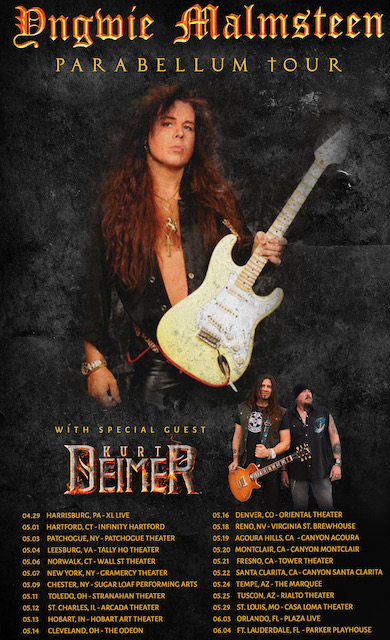 BraveWords: Are you looking forward to the upcoming tour with Yngwie Malmsteen?

Phil X: “That’s going to be crazy! I think we can pretty much take what we do and we’re pretty confident with putting it in front of a lot of bands. I think this will be great. Somebody asked us if we were changing anything up to open for Yngwie, but we just want to represent what we do. And any situation that we’ve been in, we’ve always come away with fans. And I think that’s the important thing. I think our thing is really special. I think Kurt’s voice is really special, and then when you get to the chorus of every song, you’re sucked in by the hook. And we heard that a lot on the last tour. I just think the same thing is going to happen when we go out with Yngwie. I know there is going to be like, a thousand shredders in the audience and three girlfriends – but we’re going to kill them!” [Laughs]

Kurt Deimer: “I think it only makes you better as an artist to challenge yourself and maybe not put yourself in the most comfortable situation, but be true to who you are and present your product the way you do it. I’m just thankful that he’s allowing us to be direct support and open up for him and play for all those people every night.”