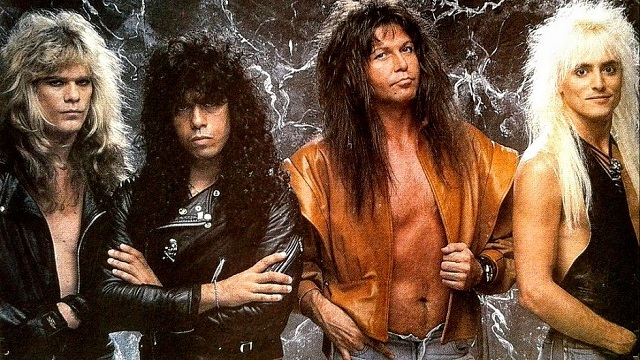 Had been done with college for a couple of years, so the summer meant little, as I was fully ensconced in the metal lifestyle, moonlighting in reality. Until researching the date, had forgotten Metal Church was even on the bill, having already moved on from them. Saw them play a small club, in town, with David Wayne, for the first record (and was left somewhat disappointed by The Dark, follow-up), so by the time of their Blessing In Disguise, the Seattleites were in my rearview mirror. Much the same situation with Accept, as the Germans were making a go of it, with new (and to be short-lived) vocalist David Reece.

However, my renewed appreciation for W.A.S.P. demonstrated that you "can go home again," as they say. Actually, thanks to the hype of the UK mag/metallic Bible, aka Kerrang, even before the rip roaring, infamously profane single (which the label refused to put on the debut), we knew about W.A.S.P.  By '89, the musical landscape was in flux, as a plethora of new (heretofore unknown, but suddenly) worthy acts appeared, on a monthly basis. Couple that with line-up changes and the goofiness that had been Inside The Electric Circus, easy to see why my interest in Blackie's boys had dimmed, greatly. If it weren't for a masterful (and underappreciated, even to this day) The Headless Children, doubtful I'd have been in attendance.

PMRC lashing in his past, this album was Blackie Lawless' first attempt at thinking with his brain, instead of the groin (even down to the collage of historical personalities depicted in the cover art, difficult as it may be, to decipher, on the miniaturized CD booklet). There were more dangerous ideas/people to highlight. Later attempts, at similarly pointed commentary, would meet with varying degrees of success, on The Crimson Idol and (despite the seemingly Neanderthal title) Kill, Fuck, Die. Add a heavier construct (certainly appealing to those of us leaning towards the likeminded stratification within the metal scene), to a more mature approach, that wasn't limited to topics targeted in the nether regions, it was a win-win concept. In later years, would have lengthy (in some cases, like post-gig, on the tour bus, outside Birch Hill nightclub, in NJ, nearly 2 hour) interviews/conversations with the main man about big non-musical ideas, like these. Any coincidence that this album came out following his guitarist Chris Holmes having a "starring" role in the Decline of Western Civilization: The Metal Years film, a year earlier? Time to jettison the low-brow party metal mantra that looked so silly on the big screen. While he was not a choirboy, that "Mensa quotient" may epitomize many a Sunset Strip rocker, but not Blackie.

Know there's a bigger picture esthetic, but didn't dig the exaggerated Jim Morrison/ The Doors "This is the end" intro tape, to start the show. Onstage, there were twin TV monitors (a novel idea, at the time) playing news clip style footage, alongside the performing band! Not sure everyone got the "connection" with the aired visuals, but it was essentially a greatest hits set, along with the Headless Children highlights. Killer stuff!

Like the night Wilt Chamberlain scored 100 points in a basketball game, at a small, half-empty gymnasium, in Hershey, PA (yeah, the chocolate town), over the decades, everyone claims to have been part of it. Yes, I was there too, the infamous showcase which garnered each band their major label contract. Undoubtedly, out of a sold-out crowd of 3,500, there are countless stories of folks who have gone on to some capacity in metaldom: performer, industry exec, radio, photography, journalism, etc., Have run into many of them through the years. It was early in the decade and we were just thrilled that metal was finally getting noticed, but the repercussions for the genre throughout the rest of the Eighties were sown that night. Think about it. Raven had been one of the big boys, an original NWOBHM act and had taken Lars and his Cali upstarts across the US on a co-headlining trek that soon saw the youngsters out-favoring the masters. Surely the Gallaghers could sense a shifting of fortunes/tides, so when Atlantic came calling (and soon persuaded them to go down a more commercial road: brass horns (!?) on The Pack Is Back, less than two years later!), they went for it. For the remainder of the decade, "sell outs" and more accessible (MTV friendly) sounds were diametrically opposed to a burgeoning noise/speed characterized by (and in a large part, due to) the other two bands on this bill.

To this day, Fistful Of Metal remains my favorite 'Thrax album, with an energy never duplicated. So seeing them onstage was a treat. In the crowd, early Metallica gigs were almost like a sporting event: at least a test of strength/endurance, if not wills, even without moshing/crowd surfers (that would come later). Rabid headbanging, shouting along, euphoric insanity. Had already seen them open for Twisted Sister, in NJ, the previous December. While they'd built a strong Jersey/NYC following, thanks to numerous shows, in the year since Megaforce issued Kill Em All, there was a groundswell of interest in these "newcomers". Hour long setlist was almost equally split between the debut and "unknown" Ride The Lightning material (which James Hetfield promised would be in stores the following week).

Two things that still resonate, the fact they played TWO instrumentals. Sure, Cliff's solo, kicking off "(Anesthesia) Pulling Teeth" was already mandatory Metallica (a phrase that would be coined a few years later), but also airing "The Call Of Ktulu", odd. The other was a rivalry that would manifest itself for decades. There was no easy way to buy merch, outside a venue or music store and available choices were limited. So talented (and financially strapped) metalheads had friends paint their favorite logos on jackets, etc. So fueled by his ouster, ex-guitarist Dave Mustaine vowed to create a "faster/heavier" version of the band, aka Megadeth. Some fans had already emblazoned a handkerchief-size depiction of the new outfit's logo and skull-faced denizen (to eventually be known as Vic Rattlehead) and stood stage-front, taunting Metallica "new boy" Kirk Hammett, with said image. Amazing how news travels so fast, even without the Internet!  To his credit, Kirk never acknowledged it (if he even saw it). Would love to see/hear a reprise of the Raven setlist from that night, much of it owing to Live At The Inferno (their entry in the Megaforce catalog, which basically was being celebrated this evening, by all participants, either side of the barricade) peppered with some of the Neat imports (which we all had anyway).

Almost a year, to the day, later, the same promoter tried to recapture the glory. Moving to the Ritz, with just Raven and a new look (new members) Anthrax. Boy, how their fortunes had switched. The Armed & Dangerous EP, from earlier in '85, had whetted salivating appetites. So Anthrax became the bigger draw, onstage with a wall of camouflaged covered Marshall Cabinets. That night was a coronation for local boys "done good." 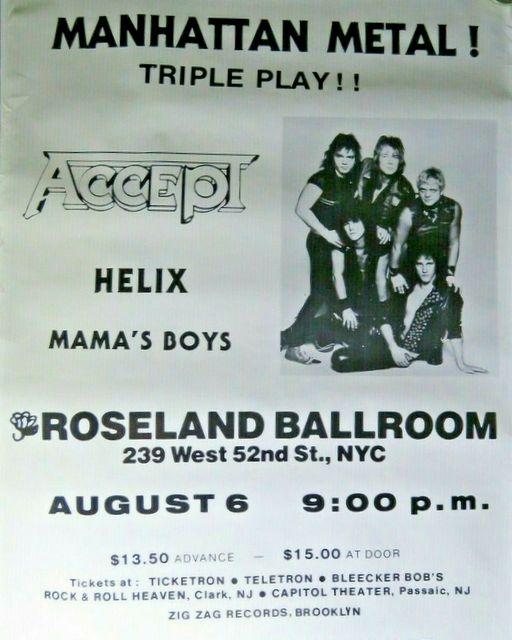 As mentioned above, fame and fortunes fluctuated throughout the ‘80s. Doubtful that anyone in Accept could have foreseen that four years hence, Udo Dirkschneider would be gone (an American, in his place!), before they would shortly disband. What had been a promising, upward trajectory following Balls To The Wall/Metal Heart would quickly stagnated. A new reliance on the visual medium (out portly, gravel-throat& buzz-cut Udo, enter the lanky, smooth voiced Reece), plus, in part, the language barrier and Anglo, especially UK, prejudice against Germany would all conspire to hasten the downfall. A year before, had seen Accept twice: the first, opening for KISS in Pittsburgh and then a month later, photographing the rabid, headlining set at the Cleveland Agora, a show that would become an FM radio broadcast.

However, NYC was probably the definitive North American set. Apart from "Dogs On Leads", the spotlight moments off the classic trio of albums (the aforementioned pair, plus Restless And Wild) had been handpicked. Since then, have seen the band numerous times, overseas and domestically, and developed a greater appreciation for the deep cuts, especially off those imported albums. Today, they reside next to the pantheon of essential songs, even more so than material off Metal Heart, which has sort of mellowed, with age. Personal footnote, was able to wrestle away one of drum sticks tossed into the crowd, by Stefan Kaufmann.

Not much support from this tour package, but odd pairings abounded throughout the Eighties.