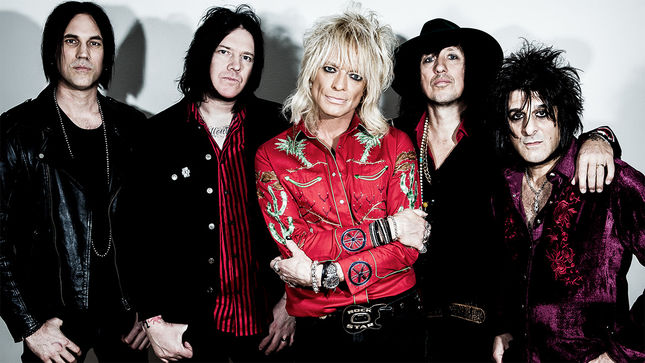 You can always count on Michael Monroe to deliver good, old fashioned, raucous rock ‘n’ roll with each of his solo efforts. And he once again hits the mark with One Man Gang - which sees such special guests as Captain Sensible (of the Damned) and Nasty Suicide (from Monroe’s earlier band, Hanoi Rocks) join in on the fun. Monroe spoke with BraveWords correspondent Greg Prato shortly before the October 18 release of One Man Gang (released in the U.S. via Silver Lining Music) - about the album’s recording, his friendship with Guns N’ Roses, and touring plans.

BraveWords: The new album is entitled One Man Gang. Yet, the cover is of a 5-man band!

Michael Monroe: “To me, it was an obvious album title, because the band is called Michael Monroe, and my name is also the band’s name. So, we’re a gang - even though it’s one name. And also, as a personality, you can say, ‘Me, myself, and I.’ Sometimes I’m a bunch of guys. But that’s the main reason why I thought it was cool - the band is Michael Monroe and it’s a solo thing, but also, it’s a band situation, really.”

BraveWords: The album was recorded in Finland. Are there any differences between recording an album in your homeland compared to other parts of the world?

Michael Monroe: “Not that much. We’ve gone to different places because of the producer - as he’s either living there or has requested someplace to record in. But this time, we produced ourselves - me, Steve Conte, and Rich Jones, who are the guitar players. So, we decided that since we had this guy, Petri Majuri, who mixed and engineered the album. We decided to do it from scratch with Petri at this studio that he works at [E-Studio in Sipoo, Finland]. It didn’t really make a difference. It was cool to be able to live at the studio. The studio was a residential studio, and was brand new. They just built it at the beginning of 2018. We recorded the album in the spring of 2018, and we had to wait for the situation to be...I wanted a good team to work with - I’m on a new label now, new management, and booking agent. That’s why it took so long for us to release the album. But it was already finished in 2018. We recorded it in the same studio from the beginning to the mixing. It was easier that way.”

Michael Monroe: “It’s basically about me. ‘I ain’t walking on water’ - obviously, like Jesus used to walk on water - ‘but I know a trick or two.’ I’ve got a couple of tricks up my sleeve of my own! The line of ‘Everybody’s pissing on their own parade,’ that’s about people are voting for things like Brexit and Trump, and then they wonder why things are so screwed up. But they did that themselves. And ‘I’m runnin’ on that PMA’ - that’s positive mental attitude. I’m trying to stay positive no matter what’s going on. Otherwise, it’s about me and it’s pretty self-explanatory.”

BraveWords: The title track also features a guest appearance by Captain Sensible of the Damned. Do you go back a long ways with him?

Michael Monroe: “The Damned have always been one of my favorite bands. I’ve known him since the early ‘80s - we’ve banged into each other quite a few times. We’re good friends, and I figured that song sounded like the Damned, so I called Captain and asked him if he wanted to play a solo on the song, and he said, ‘Well, send it over, and I’ll take a listen.’ I emailed him the song, and he replied, ‘Love the song! Will have something for you in a couple of days.’ I think it was the same day or the next day he sent me the solo, which was great. I went to the guys, and said, ‘Guess what? We’ve got Captain Sensible!’ It was a great honor, because I really do respect the Damned - they’re one of the greatest bands ever.”

BraveWords: While we’re on the topic of first-wave punk bands, you were friends with Stiv Bators of the Dead Boys and Lords Of The New Church, right?

Michael Monroe: “Yeah - Stiv was one of my heroes. We became really close friends, when we got to know each other. Always appreciated him. Stiv’s spirit is on this record and on all my records - you can hear echoes of Stiv.”

BraveWords: Is it true that you turned Axl Rose on to the music of the Dead Boys?

Michael Monroe: “Yeah. They asked me to play [saxophone and harmonica] on the Use Your Illusion album. I was living in New York, and this happened in LA. Axl told me on the phone that he had never heard of the Dead Boys - I decided to make a cassette of the Dead Boys’ first two albums, and brought it over to him. When we were listening to the tape in his car driving in Hollywood, when he heard the song ‘Ain’t It Fun,’ he went, ‘Wow! We’ve got to do this song! It’s great! Let’s do it was a duet.’ I thought that was so cool - to have it in memory of Stiv Bators in the credits. It was a tribute to Stiv, so I thought it was so cool - millions of their fans would see Stiv’s name on the record. In fact, I never asked for any money for that session...well, I got paid a session fee, for playing the harp and saxophone on that session. But I never wanted any money for the Dead Boys song, because I wanted to make sure there was no reason for them to take it off the album. I really wanted people to see Stiv’s name. To me, it was so important to have it there. It wasn’t a money thing - it was paying homage to Stiv Bators. Of course, I told them, ‘Spell my name right’ - and that’s it. [Laughs] I asked Axl, ‘Can we put it, ‘In Memory of Stiv Bators’?’ He said, ‘Yes. Of course.’ But that was the first single off The Spaghetti Incident? album. I think it was magical that even Axl sounded like Stiv in places. Stiv was definitely there in spirit.

BraveWords: Are you still in touch with Axl Rose or any of the members of G n’ R?

Michael Monroe: “Me and Slash have kept in close touch all these years. And Duff McKagan, too. Axl I haven’t seen that much, but last summer (2018) in Finland, we opened up for them - with the Darkness. When Slash’s solo thing played Finland, I’ve always ended up guesting at his show. On The Coneheads movie soundtrack, we did ‘Magic Carpet Ride,’ back in the day. In fact, when we did that, there was a new arrangement that we also recorded - Slash recorded both versions. The reason why I wanted to do Steppenwolf is I was tired of people knowing only ‘Born to be Wild,’ and they had other cool songs, too. We were planning on doing it the original way, like the original arrangement, and then I suggested this other arrangement, and we worked that out. Slash said, ‘Let’s record both versions and see what the record company chooses.’ So, they picked the new arrangement to use on the movie soundtrack. The other version had Kenny Aronoff on drums and Sami Yaffa on bass. So, I had the other version on a cassette for all these years - since 1993. All these years, I never let anyone have a copy. And then in the meantime, in 2017, I put out a compilation, Michael Monroe: The Best, and it had some previously unreleased tracks on it. But I asked Slash, ‘Can I maybe use that other version on that?’ Which is probably the only one in existence. And he was so cool - he said to send it over, and he said it was OK to use it. He’s such a great guy. A sweetheart. A heart of gold. And he never changed - he’s always been extremely nice, considerate, and polite. He’s only gotten nicer. I love those guys. They’re great. I’m glad they’re as big as they are - because they’ve got the right idea, about doing the right kind of rock n’ roll.”

BraveWords: Did you see the Mötley Crüe movie, The Dirt, and if so, what did you think of how Razzle was portrayed?

Michael Monroe: “We’re going out to Europe in October. And then we’re going to England - starting October 30th. We’re planning on touring this album as much as possible. I don’t know about the States. We’ve done some tours in the States, and New York and LA are always great...we’ve kind of come to the conclusion that unless you can get a support slot with someone playing big arenas, then it’s kind of like hitting your head against the wall. Playing in clubs to a couple of hundred people or a hundred people a night, you’re not going to get anywhere. It will be a waste of money and a waste of time. Whenever we’ve played there, the audiences have been great and emotional. There are people there that really appreciate authentic, good rock ‘n’ roll. But it’s just a shame that the situation is such that country and hip-hop are happening there big time, and rock ‘n’ roll ain’t happening that much.”