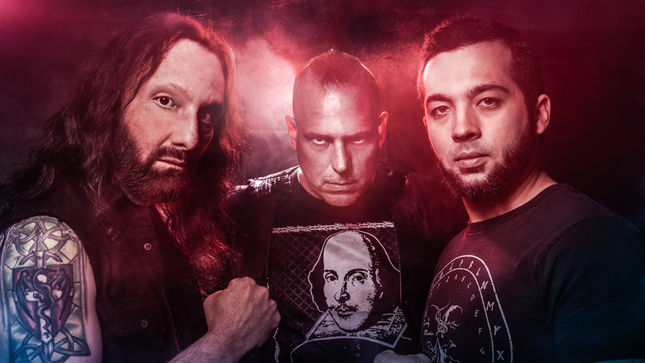 Bassist Mike Lepond has been playing music for 20 years with Symphony X. Along his journey with the prog/power metallers, he has also played with “Metal” Mike Chlasciak (Halford), Seven Witches, currently in the Ross the Boss band, another recent new collaboration Deadrisen (with Rod Rivera), plus many guest appearances on other’s projects and albums. By 2014, Mike decided to start creating his own music inspired by the classic heavy metal bands from the ‘70s, '80s, and '90s, releasing the self-titled Mike LePond's Silent Assassins. Pawn And Prophecy followed in 2018, and now he's brought the Whore Of Babylon, moved from the initial release date in May. Mike spoke with BraveWords about the latest album, the creativity behind his lyrics, Symphony X, the Coronavirus, and the future.

BraveWords: Your three solo albums, Silent Assassins, explore dark historical, fantasy, fiction, myths and legends. Are there any common topics, lyrics, song title that cross over across the three albums?

Mike Lepond; “Yes, hmm, good question. If you listen to the first self-titled Assassins album, two songs are about Camelot, ‘The Quest’ and ‘The Oath Of Honor’. And from the new album there is a part three of what is like a series, called ‘Avalon’, and in this song what’s happening is King Arthur is in Avalon and you don’t if he is dead or healing his wounds from the black knight, and the people of Camelot are in trouble again, and calling out to him to come back and fight another time. So that is actually kind of cool. On the second album, Pawn And Prophecy, there is a song about ancient Rome, and this album I deal with Julius Cesar. That may be it. Oh wait, I thought of one last one, on the first album I did a song in homage to Edgar Allan Poe, and now on this new one Whore Of Babylon, there is a song ‘The Tell Tale Heart’.

BraveWords: Why the title Whore Of Babylon, and is this a loose concept because of the title?

Mike Lepond: “It’s like every album what can you call the album, because it’s kind of a big deal what you call it. Usually what I like to do is call the album one of the songs from the album. I just thought Whore Of Babylon is so majestic, epic. But the other part of me was saying ‘is the record company going to let you put out an album called Whore Of Babylon’ (laughs). So I just sat here and submitted it, and if they had a problem I would have gladly changed the album title. They were fine with it, and this record company, Silver Lining, have been great. I have never been treated better in my entire career, they are so behind me and I think this record has a good chance of doing well. Like previous albums, every song is its own conceptual piece, story. So songs really intertwine. It’d be something to try in the future, but every song is just its own mini story.” 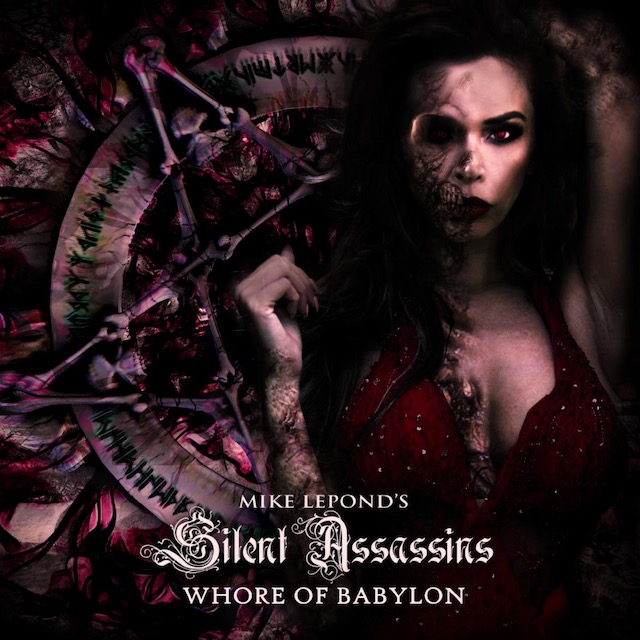 BraveWords: Why the song title “Dracul Son”, and not “Dracula’s Son”, or “Son of Dracula”?

BraveWords: Your lyrics are presented and phrased like an H.P. Lovecraft, or Edgar Allen Poe tale. How much of the wording in for example, “The Tell Tale Heart”, is lifted from the Poe poem?

Mike Lepond: “Yes, what I did was, and the first song I wrote in reference to Edgar Allen Poe, I read the story, if I happen to catch a word, or wording, that is really dark and cool, I will use it into the song into a lyric. There is a spoken word section in there that I used some of what he wrote in there. But obviously it’s not going to fit the way he wrote it, so I put my spin on it. So I do take some of his words and sentences and fit it, kind of a blending of my own take and his words from the stories. Him and Lovecraft are awesome. I remember in high school learning Poe, and the teacher was diving into every line, and every line has meaning. Its genius.

BraveWords: A song like “Champion” is different, about a dead soldier.

Mike Lepond: “That song came about is what I was envisioning was a person walking along an abandoned country road, not really many people on it, it’s raining and cold, and they happen to pass a military cemetery. And this person gets inspired, overwhelmed, and kneels down to a grave, and basically says thank you for everything you did. I gave the song to my singer Allan Tecchio and he felt it’d be better if the song had a female singer. I never had that thought in mind, so I thought of my friend for many years Sarah Teets from the band Mindmaze, asked if she was interested, and she was. She came down to Michael Romeo’s studio, sang the song, and she played some flute which was cool, and it gives you a break from all the heavy metal. It’s great because it’s different from the rest of the album. This song, and ‘Power Of Steel’, don’t have any kind of historical or fantasy connection to anything.” 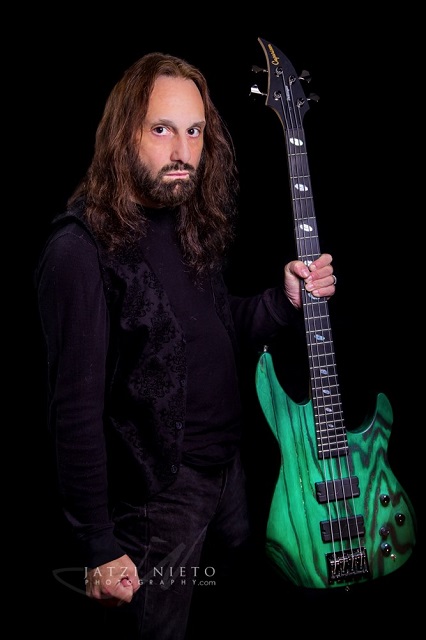 BraveWords: Who is the “Ironborn”? Does it have anything to do with the song “Power Of Steel”?

Mike Lepond:  “Actually, no, ‘Power Of Steel’ I had that song during the days of the first solo album and it just never made it to a record. Then I let Ross the Boss hear it because maybe he wanted to record it. ‘Ironborn’, I watched some Game of Thrones, I’m not the guy that watched every single episode, but I watched it enough for this Ironborn and thought it was very heavy metal. The words just came in to my head, I had to research it online, I wanted to come up with an epic battle song. That was also the second lyric video that was released for the new album.”

BraveWords:  The players who worked with you on the first two Silent Assassins album are back, correct?

Mike Lepond: “Yes, Alan Tecchio is the singer, Rod Rivera plays some guitar leads, and Lance Barnewold. Sarah Teets is the latest addition. Rod Rivera, I have another band with him DeadRisen, he did lead on ‘Avalon’ and ‘Night Of The Long Knives’. I use Rod for more of the Celtic/gypsy type songs because his father was a professional flamenco guitar player. And Rod loves Blackmore and Schenker, so he combines those influences together and has a nice style, so some songs he can really add some nice things to certain songs.”

BraveWords: How has the Coronavirius now change the promotion, sale, everything moving forward for this new album Whore Of Babylon?

Mike Lepond: “As far as the album, the release date was changed to June 26 and hoping that date stays. It’s weird, you know everybody is home so you are hoping people will want to listen to some new music. But there is also a lot of people are not working. Tours have been postponed for Symphony X, and Ross the Boss. So I got hammered pretty good, and I just moved into a new house. What I have been doing is some lessons online for a local School of Rock in Somerville, NJ, and I have been writing some new music, keeping busy. Michael Romeo and I are always in touch, and he is working on some new music, and once things get better and we can get together again we will start working on the next album. Right now he is working on his latest solo album. As of right now, there is actually still a tour for Symphony X in South America for August, so I’m hoping we can do it. But all the summer festivals have been postponed till next year, so this tour may also.” 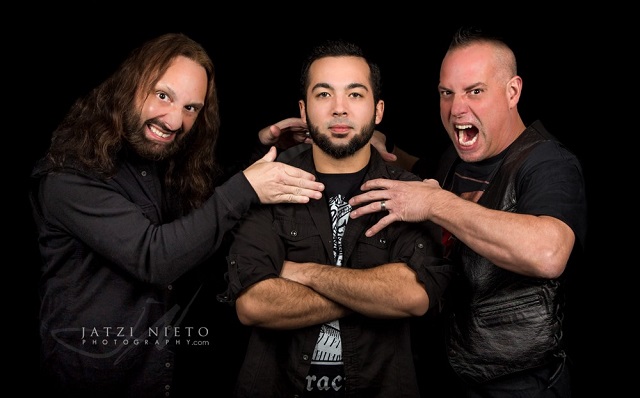 BraveWords:  Are you collaborating with, or contributing to anyone else’s album?

Mike Lepond: “Right now no, I haven’t been doing much else aside from my own music. Unfortunately I am not set up yet in the new house to record music.”

BraveWords: Anything you want to add?

Mike Lepond:  “Yeah, thanks to all the readers of BraveWords, I know we are going through some tough times right now, but nothing can stop heavy metal, shows will happen again, and when it does it will be great. It may be a little different until people feel totally confident and comfortable. Like I’ve been watching these live streams of concerts online with no audience, and when the band is doing playing a song its dead silence. It’s so weird. It takes getting used to.”