MOONSPELL - Reduced To The Maximum 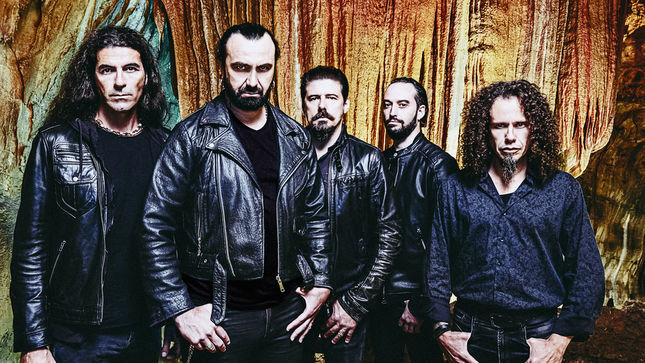 The one constant in Moonspell's career is that a new album will always piss off some of the band's fans; fans that have most likely abandoned ship at some point only to return out of a mix of curiosity and loyalty. This has been the case since the 1997 release of the band's breakthrough second record, Irreligious, when Moonspell traded in the black metal-isms of their 1995 debut album, Wolfheart, for a distinctive gothic metal sound that became the foundation of their career from that point forward. Even so, the band hasn't been shy about messing around with their musical / metal dynamics and either twisting or straight up ignoring the "gothic" stamp they were branded with thanks to Irreligious. Their twelfth album, Hermitage, continues this tradition, and anyone who is a fan of Moonspell's previous two albums are in for a shock. The straightforward goth metal of Extinct (2015) has been trimmed back and the monstrous tribal / symphonic attack of 1755 (2017) is gone, with Moonspell serving up a record that demands to absorbed rather than devoured. Credit or blame these latest changes, as always, on frontman Fernando Ribeiro, who is the self-proclaimed catalyst for the new musical direction on Hermitage.

"The first time I wrote down 'hermitage' as an idea was 2017," says Ribeiro. "I have this mania or routine, or whatever you want to call it, that when we finish an album I'm already thinking about the next one. I don't even know what will be going on in six months, never mind a year from now, but when I close a chapter I open a new one. Hermitage was an idea that struck me in 2017 because when I was thinking about the lyrical part of a new album, the poetic part, I was already looking at people social distancing. I got away from social networking because I think that awareness brought division, connectivity brought solitude, and people were stonewalling themselves without the imposition of a viral crisis. Our values are the exact opposite of what we are feeling. I don't think people have ever felt so alone, there's no sense of community, and one thing led to the other. I started reading about hermit saints, modern day hermits, and one of the things I learned that really inspired me was that contrary to what a lot of people think, hermits don't go to the desert or to the mountains and mind their own business. Most often these old time hermit saints took a break from their community and then returned to hopefully improve it. On the other side, modern day hermits leave an oppressive society where they have to work to fit into the system. I felt very deeply that we should write an album about that because this is what's happening in our world."

"I said to Pedro Paixão (keyboards) and Ricardo (Amorim) I wanted a no-strings-attached album," Ribeiro reveals. "I wanted it to be minimal, almost a Moonspell Redux (laughs); an album without the layering of Extinct or especially 1755, and without sounding like we're trying too hard. Nowadays metal music... not everything, but the majority of bands are pushing the guitars and the drums in your face, the singers are always changing their vocals in the songs or just screaming, the songs are all played at 250 bpm. I wanted a musical album and at the end of the day that's what we did. It might be divisive, obviously, but that's nothing new for Moonspell. This is exactly what we needed to do."

There is a musical simplicity to Hermitage that, if you're open to Moonspell flexing their experimental muscles yet again or a Pink Floyd fan, will draw you in. According to Ribeiro, sometimes that simplicity is the most difficult thing to obtain when writing new music.

"Some people find that simplicity on Hermitage strange because complexity is the flavour of the day. Bottom line, when we went to record in the UK to record with our producer, he was very aware of our idiosyncrasies as players. We spent a lot of time working on sounds instead of being so anal about the tracking and fixing things on the computer. We wanted to recreate the experience of five guys playing in a room together. That's why the structures of the songs aren't exactly typical Moonspell. I see Hermitage as being more fluid than anything else. Sometimes I'm at a loss for words to describe it, but I can say that this is one of the most musical albums we've ever done. And I think that's what gives Hermitage value." 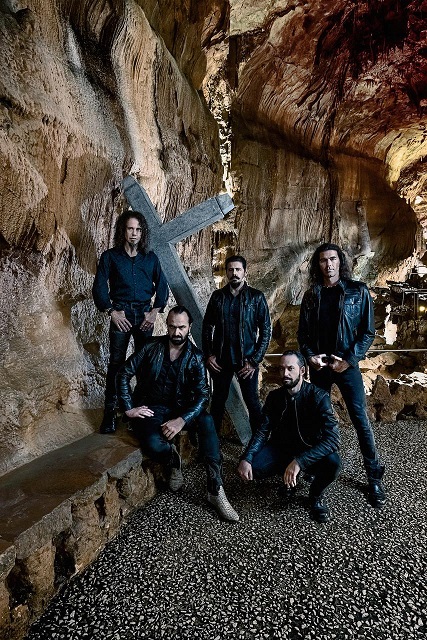 The two instrumentals on Hermitage - mid-album track "Solitarian" and the "City Quitter" outro - plus Ribeiro's huge vocal performance on the remaining eight tracks, as well as the uncluttered song arrangements support this claim. As Moonspell albums go, this one sees the band exploring brand new territory yet again. Ribeiro digs into the creative process for the album.

"Pedro and Ricardo are the songwriters of Moonspell, and I don't know what happens with creative people but sometimes they need validation, and this is coming from the worst musician in the band, which is me," he laughs. "I kick things off, I suppose, unblocking the path we want to take. I do that with the lyrics, with the concept, and everything Moonspell related. I don't overthink it but I think it's an important role. I don't write the music; I do some vocal things and add colour to the painting. It's as if I write the script and the other guys make the movie. In the case of making Hermitage the important thing was for me to pass on the confidence and to pass on the idea no-strings-attached. I mean, what can happen to us in our career now? We've had a lot of praise, we've had a lot of backlash, and we're quite used to people saying 'This is shit, it isn't Moonspell anymore, it isn't Wolfheart.' We are limited to the tools we have, and the territory we have isn't entirely uncharted because we're still discovering things about it."

"One of the things I have heard people say about Hermitage is that it sounds like Moonspell," Ribeiro continues, "but some people say that like it's a bad thing (laughs). That kind of puzzles me because this album has everything we wanted as musicians; to incorporate our influences, which are quite obvious. We know perfectly we didn't arrive here by ourselves, musically speaking. We were attentive to what was going on in the past, and at the end of the day Hermitage is just music. It's an album that demands attention and a little bit of love from the listener, but isn't that what Moonspell has done forever Dividing people, bringing people together, upsetting the fans and then getting them back. People say I should be proud of our legacy and yes, of course, but what does my legacy give me, really? All the album rights go to the record labels anyway, and I made a little money off of it. Of course I'm proud of Moonspell and I never expected to come this far, but our legacy doesn't influence us. Whenever we do a Moonspell album it's like starting over again."

That being said, Moonspell does offer a few nods to previous eras of their career over the course of Hermitage. Ribeiro and his bandmates were clearly functioning on a creative high while making the record, but they're not so foolish as to deny their history or their influences.

"Consolidating our sound is important to us, and in a strange way Hermitage is a consolidation of ourselves," Ribeiro explains. "Some people say this is brand new for us, which is a good sign because as listener I like to be surprised. Surprising me is pleasing me, so when we are behind the wheel I have that in mind. When we were deciding what to release off Hermitage first, even though I like to make and share music, it's a very complex thing for a musician to share their music. It's a necessary evil, like sending your kid to school; you're not in control anymore and you shouldn't try to be. We put out 'The Greater Good' as the first single because it kind of sums up the new album; it's progressive, it has a more metal-oriented aspect towards the end which really steps up the feeling of the song. 'Common Prayers' is more our comfort zone and it was a song that we really liked when we were writing it, but when we looked at the album as a whole we saw that it could have been on Extinct or Omega White (2012). That's the one song on the album where we compromised with our old sound, but everything else is very fresh and new. It ranges from the Pink Floyd influence we definitely have to the Bathory influence of Twilight Of The Gods (1991). We kind of looked to that and rediscovered that music in a sense when making Hermitage."

"Making music is a gut feeling; we don't rationalize it that much. We don't anticipate the love or the hate from the fans. I think Moonspell is one of those bands that doesn't take anything for granted and I think it shows in our music." 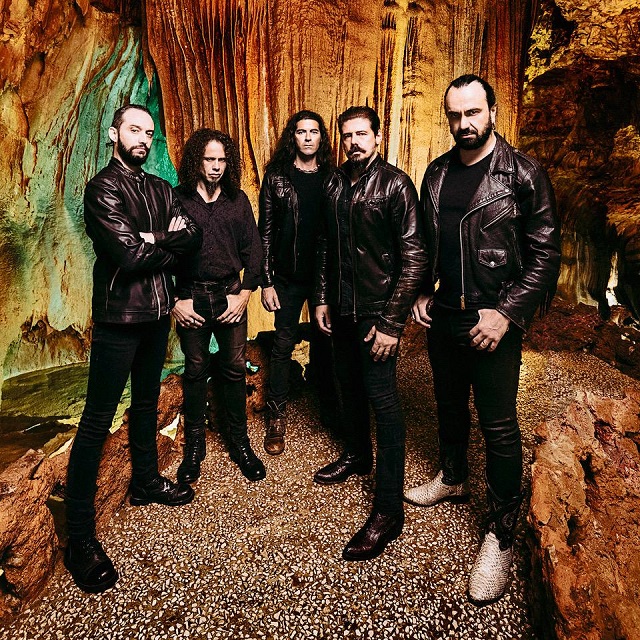 Which is why Moonspell is still around almost 30 years later...

"I don't know what's coming next, I don't know if there is a next," Ribeiro laughs. "I have a very No Bullshit attachment to Moonspell. For me, Moonspell was always improbable. We weren't a sure bet for anyone. We were just a black horse from Portugal running on the track, so it's a mix between vertigo and Russian roulette whenever we do something. People say 'You're an established band...' and I know that we're not because I work on Moonspell on a daily basis. We are used to the hardships that come with being in a band, we are used to the debate, and I don't know what's keeping us alive but it could be that you're right."

"I think Moonspell lives on the edge a little bit as a band," he adds. "This is never a sure thing. We discuss a lot of stuff, we're always questioning ourselves, and that's the dynamic that keeps things interesting for us, and meaningful enough that we can still dare to think about making new albums that please our fans. I don't know if we opened minds necessarily, but I think Moonspell and many other bands from the '90s were important for people to attain a certain open-mindedness when it comes to metal. A lot of people think we've compromised since then - that's their judgement and we have to live with it - but I think that if people look through our discography they will understand that the true engine of Moonspell in us not being satisfied with anything."