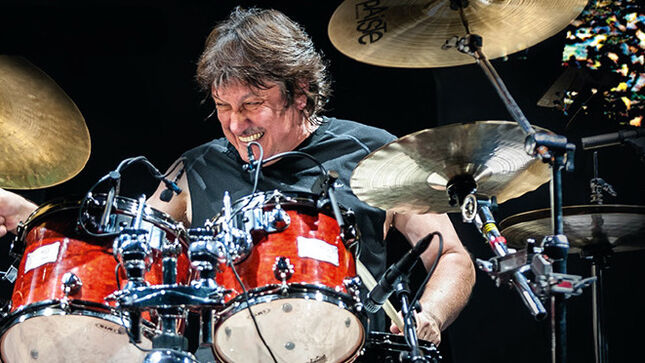 If you’re a fan of veteran British blues rockers Ten Years After, there are quite a few recent (and forthcoming) releases that are sure to be worthy additions to your collection. The band – which still includes two members from their classic “Woodstock era line-up” (drummer Ric Lee and keyboardist Chick Churchill) – issued their most recent studio album, A Sting In The Tale, in 2017, which is being issued as a “deluxe edition” (featuring bonus tracks) on March 19, 2021, while later this year, the band’s complete show-stopping performance from Woodstock in 1969 will be released on album for the first time.

Additionally, Ric recently issued an autobiography, From Headstocks To Woodstock: A Drummer's Tale, which recounts the many ups and downs of his long-and-winding career, and memories of crossing paths with many fellow musicians and celebrities (ordering info is on TYA’s website). The drummer recently spoke with BraveWords correspondent Greg Prato, about his new book, his thoughts about drum peer John Bonham, and also, if he feels that his band may have helped create heavy metal.

BraveWords: Was it therapeutic going through your career and working on From Headstocks To Woodstock?

Ric Lee: “I’m not sure if ‘therapeutic’ is the word I’d use. I started it about ten years before I finished it. And then I gave up after about five, as well. Because I was originally going to write from my birth up to whatever age I was when I started it. And then, I thought, ‘There’s all this stuff post-Woodstock. If I’m not careful, it could sound like sour grapes’ – leading up to the band breaking up. So, I thought the best thing to do was to finish it on a high. But what’s spurred me on when I started a second time, was a friend in Los Angeles, she’s an agent for after-dinner speakers and university lecturers and people who do tours. And she said, ‘Do you ever talk?’ I said, ‘Yes, I do actually.’ She said, ‘Oh, can I have a look at that? Because maybe I can help you.’ So I sent her over a video. Then, she said, ‘Do you have a book?’ I said, ‘I started one, but I didn’t finish it.’ She said, ‘Well…get it finished! Because that’s a good starting point, because we can send your book around.’ Anyway, that took me another five years to finish. But I enjoyed doing it. It’s when you do it all yourself it’s hard work, but I read a few books on how to write. And the one that impressed me the most, I think it’s called Creative Writing, by an English writer. And while I was reading it, he said, ‘As you read this page, you have to remember that this has been edited six times.’ I thought, ‘Ah.’ So, what I did is I started by writing a thousand words on a blank sheet of paper on the first day. Because I started writing it longhand, and I wrote a thousand words, and then the next day, I would take that first thousand words and edit it, and then I’d write the next thousand words and so on. So, the book has been edited God knows how many times, and then I moved to computer – which is much easier, because you can edit a lot easier. The other thing I had was a bit of luck – a book that was a pictorial history of Alvin Lee and Ten Years After [2001’s Alvin Lee and Ten Years After: Visual History], and it was written by a fan of ours from Boston, a guy named Herb Staehr, who sadly died about two years after I met him. But he put this book together, and it was more or less in chronological order. So, I used that as my skeleton, and when I came to certain parts, ‘Oh yes, I remember what happened there.’ And I could then hang the flesh on that. I also had my own diaries, but bizarrely, the one in 1969, stopped about five weeks before Woodstock! So, I had to look at other sources. But, therapeutic is not the word…I think therapy started after I finished it.” [Laughs]

BraveWords: What do you think of Woodstock when you see footage of it today?

Ric Lee: “I’ve got to be honest – I haven’t seen any for a long time now. But the whole event was tremendous. Originally, they thought it was going to be 50,000 people – which is quite big for those days. We’d done the Seattle Pop Festival about a month before that – and that was 50,000 people then. That was very much a family affair – everybody brought their kids and it was a beautiful, hot day, and they were all running around. That was over a weekend – three days. But Woodstock, as I said they thought was going to be about 50,000 people. Our manager didn’t want us to do it – because they weren’t offering the kind of money we were getting in an auditorium we were playing at the time. It was only because our agent kept pestering us and said, ‘You’d be crazy not to do this.’ But what I think of it when I see clips…it’s one of the greatest events of my life. I always think of it with great fondness. And it was a festival of love, peace, and music – there was no violence, as I understand it.  And it proved we could all live together – if we really want to. And the conditions those people were in were not ideal – with the mud, the storm. And then a lot of them didn’t have food – they had food dropped to them. And then they’d share it with their friends or neighbors – who they probably didn’t really know. Sadly, it disappeared again. But there was proof that if we wanted to, we could live together.” 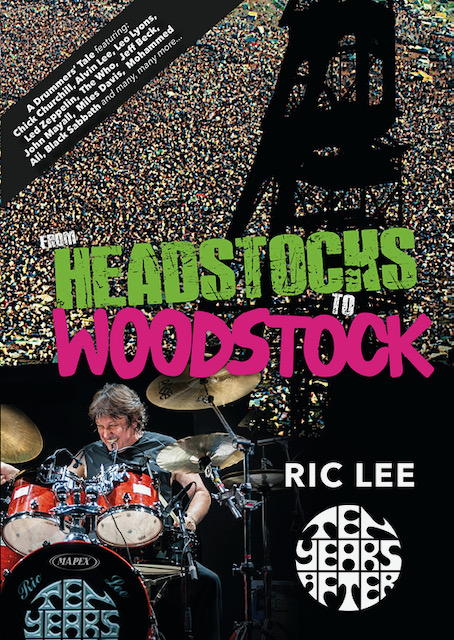 BraveWords: Last year, I put out a book about John Bonham, entitled Bonzo. You were an acquaintance of his – what made him so unique as a drummer?

Ric Lee: “What made him different…the style in which he played, everybody says it and it’s very true – he was a heavy rock drummer, but he had a certain swing to him. So, it was kind of an amalgam of heavy rock and the swing thing. I would guess he came from the same sort of background as I did – when we first started, the first two albums we did, we did a lot of swing stuff. What we call ‘shuffle.’ So, my background was listening to the swing drummers of the ‘40s and ‘50s. And I guess Bonham did that, too – because there really wasn’t anybody else before that. Mitch Mitchell for instance, had a similar sort of approach – with Jimi. But Bonham I think encapsulated it most of all. And he was also a very talented player, and when you think of Zeppelin’s arrangements, they were pretty scary! And he played to the best of those arrangements – he worked around the vocals, he worked very well with Jimmy’s guitar. I mean, just as a comparison, we did the Live At The Fillmore East recording, and that to me was the nadir of Alvin and me – because I was playing off of what he did. A lot. And I never really realized quite so much until I listened back to that recording. And I’m very proud of that, because that works so well. Not consciously – it was in a sort of way, a subconscious thing. He would play something and I would fire off, and I may throw something and he’d fire off that. And I think that’s the way Bonham and Page worked. And he also worked very well around the vocals. But of course, he worked with Robert Plant before – in the Band Of Joy. As a person, he was difficult. When he wasn’t drunk, he was great. He was a best mate. When he was drunk, he was dangerous – and not very pleasant. And I saw both sides of that. And I can appreciate when he wasn’t drunk! That might be true of all of us – I know in the past when I’ve been drunk I’ve not been the most pleasant of people. So, it is an effect that alcohol has on you at certain times.”

BraveWords: Bands like Led Zeppelin and Black Sabbath often get credited with creating heavy metal. Do you think that Ten Years After may have played a part in that, too?

Ric Lee: “No. I would never call us ‘heavy metal.’ Alvin always called us ‘progressive,’ because that was – as he called it – an underground term. Because we were always trying to progress and do different things. But we were definitely – certainly in the beginning – we had both feet in jazz-blues, as opposed to the heavy metal. But I think really and truly, the creators of metal were Sabbath. And Tony Iommi and I were very good friends for many years – I know Ozzy, of course. Well, I knew all the guys. Bill Ward was a great drummer. All of us at that time had our own style. But I think we all came from the similar influences. And then we took those influences and changed them around, and made them whatever it was we became. But no, I wouldn’t have said that Ten Years After is an unrecognized heavy metal act.” 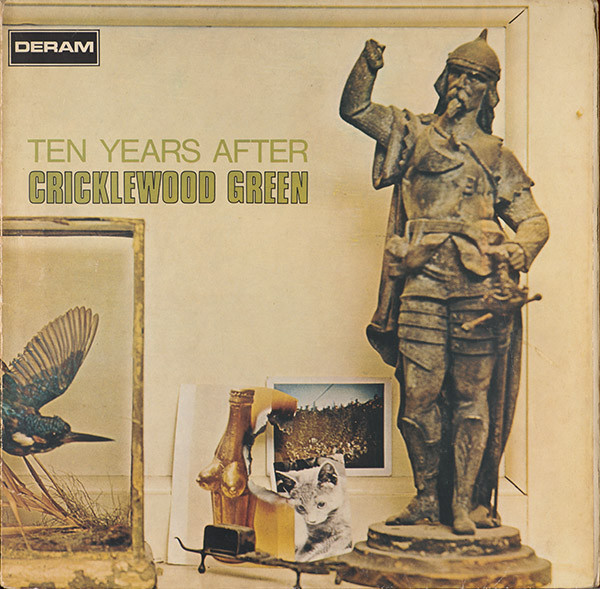 BraveWords: But what about as far as an influence on what later became hard rock or heavy metal?

Ric Lee: “Yeah. If you like, ‘hard rock’ would be a better term. From say, the Cricklewood Green album. I would say from that point, it became more hard rock. We dropped a lot of the swing stuff we were doing. Although Alvin always came up with a swing number on nearly all the albums. At least one. He’d say, ‘What do you think of this?’ And I’d say, ‘Absolutely. We’ve got to do some swing.’ Because – excuse the corny phrase – ‘swing was my thing’.” [Laughs]