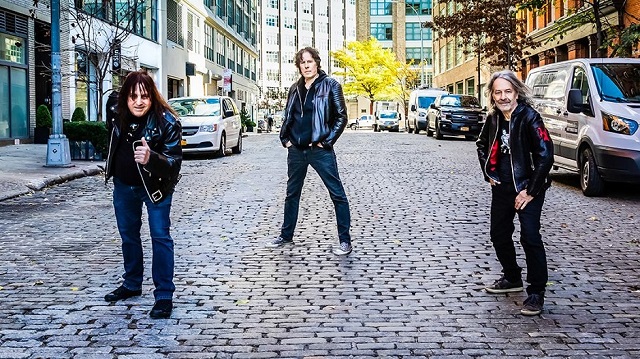 New York City punk ‘n’ roll pioneers The Dictators are back in action, with a few necessary changes including, sadly, one bloodbrother sidelined, another exiled, but then a Blue Öyster Cult drummer added to the super-charged mix.

Bad news first: since the recording of the band’s new material (more on that in a bit), guitarist Scott Kempner has had to bow out. “Scott has been diagnosed with early stage dementia,” explains Andy Shernoff, chief writer, recorder and lead singer of this version of the band. “His father had it as well, when he was younger. We were working on stuff with the band and Scott would get confused and subsequently he got tested. He’s okay. He’s got an apartment. He’s living there with his sister. He’s got somebody with him in the daytime. He’s not suffering. He’s sitting in front of the TV with a guitar in his lap. There’s no cure. We just hope that the progression is slow. That’s the unfortunate story.”

“And it’s truly ironic,” continues punk’s most accomplished wine merchant. “We got together because there was some Dictators business that drew me, Ross and Scott together. We were communicating—how do we solve this problem? blah blah blah. Once it was solved—and it took a long time to solve—Scott goes, “Hey, let’s get together and play.” And that’s the last thing… I was over the Dictators. I had a nice life. I live in upstate New York and I play in a lot of local bands, things are good, no problem. And Scott was the guy who convinced me, “Listen to me, come on, we can make something great.” And it’s so ironic that he can’t share in making this music that’s been absolutely a lot of fun to make. The first two songs are really kicking ass, people seem to like them and we’ve got more stuff coming. It’s a whole process but it’s been really smooth and easy and it’s a shame that Scott can’t share in that journey.”

This journey now finds original members Andy and Ross the Boss travelling down the rock ‘n’ roll road with Albert Bouchard. Andy says that he has in mind who to bring on board for a second guitarist. The two new songs are “Let’s Get the Band Back Together” and “God Damn New York,” both of which have full-on videos that can be viewed on YouTube. Scott is on both songs, as are Tish and Snooky doing back-up vocals. Andy produces and the illustrious Ed Stasium is on board for the mix. 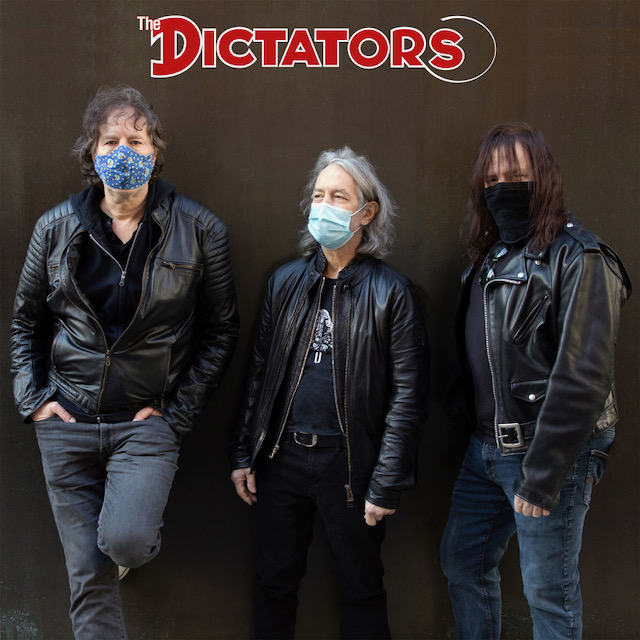 But there’s no Handsome Dick Manitoba.

“No, you know, we had some legal problems with him, between me, Scott and Ross. I don’t want to go into the legalities, but we really want a healthy, creative situation. If you inject Richard in there, things just get a little off-kilter for what we want to do. I don’t want to go into the legal problems because they’re over—they’re done with. On our end, justice was done. I just want a healthy environment. We’re senior citizens! And we’re singing a song called ‘Let’s Get the Band Back Together.’ But as senior citizens, me, Albert and Ross have made literally hundreds of records. So the attitude was: don’t make problems; have fun. We like the process of making records. We like rehearsing, we like playing—you know, it’s what we do. I’ve been doing it all my life. Same with Albert and Ross. And with Richard, I don’t know, he shakes it up in a way thatwould not be comfortable for us.”

As for the new songs, first came “Let’s Get the Band Back Together,” a typical well-considered but deceptively no-frills up-tempo rocker co-written by Jesse Bates.

“Jesse Bates is a friend of mine. He was playing at a club—him and his guitar—and we’d hang out. He did this song ‘Let’s Get the Band Back Together’ and I was just literally laughing at the punch line. I just said to Jessie, ‘This song is made for me.’ So he said, ‘Yeah, do it. Do what you want, but just make sure I get credit.’ But I rewrote a lot of it and changed the words around, added a bridge, changed the chords. And I recorded it for a solo EP I did eight or nine years ago, did a video for it—it was a lot of fun.”

“And then Ross talked about getting the band back together and it was time to present songs we were talking, blah blah blah, and this one, everybody was like, ‘Of course, we gotta do this; this is going to be a lot of fun.’ So we revved it up; we definitely revved it up. Ross really exceeded himself at the solos here, and Albert kicked ass on the drums. So I’m really happy with this version. I listen back to the old version and it now sounds so lame, even though originally I thought it was really great. It’s still good but it’s a whole different style and approach to the song. So it gained a lot along the way.” 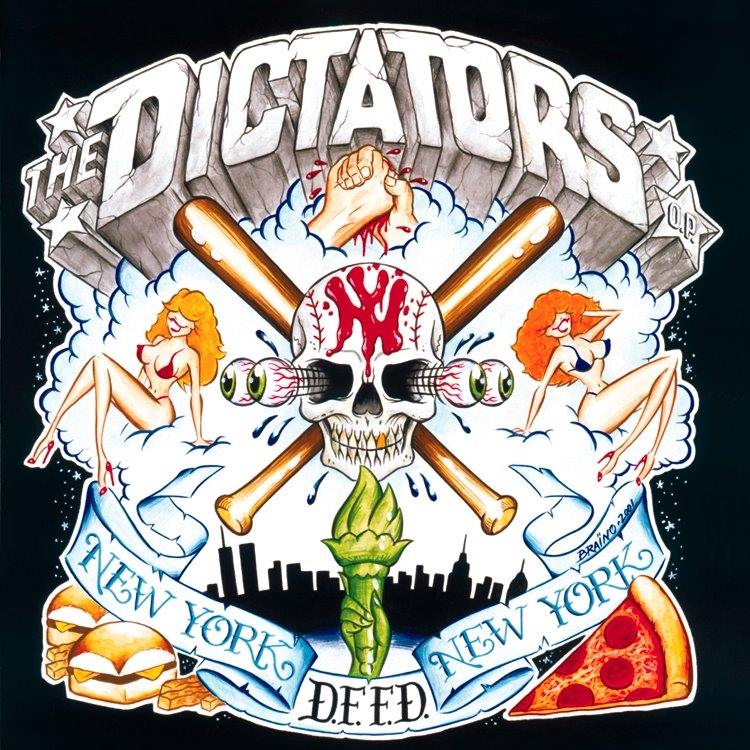 Ah yes, Ross and solos. He’s one of the best. Listen to what he does on the ebullient “Who Will Save Rock and Roll?” from D.F.F.D. and you’ll see what I mean. The whole weight of rock ‘n’ roll history is poured into that solo to the point where it steals the thunder from what is one of the great unsung hard rock anthems from the last 20 years. And live, Ross nailed it even harder.

“Well, Ross, you know, I’ve worked with Ross so long,” agrees Shernoff. “I’m working on a song, come to this part here, I don’t want to lose energy—I want to keep the dynamics up. I know Ross is going to do a kick-ass solo and kick it up a notch and maintain interest. He always gives me a lot of solos and I comp them. This is something we’ve done for years and years—I’ve always comped the solos in different ways. And we had no problem; everything was good. But we had a little problem on the intro; something wasn’t right. Finally we had something and I told him, ‘I think we got it, Ross;I think we got it.’ And then two days later I get an email and he goes, ‘Andy, I can beat this, I can beat this.’ And he sent me the new intro, which to me is the perfect introduction—it really was what I was looking for. It kicked ass on the other intro we had, and I’m just glad that he really nailed what we were looking for. It’s simple, it’s catchy and just draws you in, and it’s not too riffy. We worked on these songs a long time but it’s a good process; I love hearing his solos. Even if he sends me something and I say it’s in the wrong direction—it’s still a great solo.”

Then there’s “God Damn New York,” which indeed is a little more riffy! But it’s the lyrics on this one that take centre stage.

“Yeah, I moved out of New York City,” divulges Andy. “I live in upstate New York. It’s kind of rural up here, beautiful area. My wife’s really happy; she’s a wildlife photographer and she’s busy busy busy taking photos of, you know, bobcats and bears and birds and stuff. Life is really good. But when I first met my wife, we wrote a song called ‘God Damn New York’ for a video that she was going to make. She was doing comedy and stuff in the East Village in New York. So again, hey, this is a song that got a reaction. I had to change the key and I had to redo the lyrics to make it about my leaving New York. So it’s kind of a love/hate song to New York. But I think it’s positive, because I say ‘Someday we’ll recover.’ New York is in tough shape now, but I’m positive that it will come back to its previous heights. But right now, you know, it’s not a place for me tolive.”

Look for another song in July, says Shernoff in closing. “Yes, we just need a few solos. We were so busy finishing “Let’s Get the Band Back Together” that I had no time to finish the third song. But I pulled it up and it sounds really good; it just need some solos from Ross and a few little knick-knacks, a little ear candy. We’re going to go and record some more songs once we get the new guitarist, but into November or December, we’ll have a very special seasonal song about Festivus.”

Will Christmas in New York with the Dictators see the city returned to its pre-Covid glory? More importantly will Festivus traditions such as “The Airing of Grievances” and “Feats of Strengths” be fully mask-less? Only time—and the continued trajectory of our success with vaccinations—will dictate.