Thin Lizzy guitarist Scott Gorham is looking fit and energized, ready to turn his attention to all things Lizzy now that he has taken himself out of the prolific and well-regarded Black Star Riders band after a run of ten years and four fine albums.
But the reasoning for the move is actually four-fold. First, he’s going to put together a new version of Thin Lizzy, which, pointedly, will include Ricky Warwick still as front man. Second, he wants to do a third 21 Guns album, and is already discussing the idea with Leif Johanson, with the two planning on getting Scott over to Norway to record. Next, there’s the recent top-notch Phil Lynott documentary out called Songs for While I’m Away, which has lifted the profile of the band. Fourth, in conjunction, there’s a proper official release of The Boys Are Back in Town: Live at the Sydney Opera House October 1978. 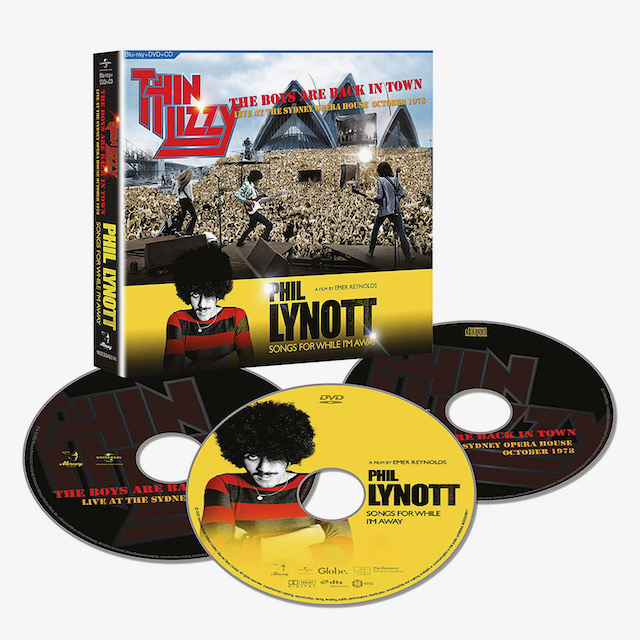 “The Sydney Opera House thing was pretty interesting,” begins Scott. “We had so many things against us on that day. I’m amazed that it worked, really, as well as it did. We were in Melbourne the day before Sydney, and apparently the radio station in Sydney, a couple days beforehand, got on the air and said, ‘Well, ladies and gentlemen, you know, Thin Lizzy are playing Friday night at the Sydney Opera House. And we hear there’s still tickets available. So if you rush down there, you might be one of the lucky ones to get a ticket. Now, this was capped off at 6,000 people. Because the mayor and the councillors and all that did not want hordes of people in front of this iconic building. They didn’t want any damage done to it at all. So we said okay, well, 6,000 is great. But what happens on the day, there were thousands of people that came down into Sydney looking to get in, right? And you’ve got a security system that’s woefully under-fed here. The police were brought in and they finally said all right, we’ll just let everybody out there stay or there’s going to be a problem.”
“And our monitor guy came to us and said, ‘Well, we’ve got another problem. Your side fills are out. You’re just going to be working on these little tiny monitors now.’ Okay, great, what else can go wrong? And then the sound guy came in and said, ‘Well, the PA was brought in to totally accommodate 6,000 people. We’ve got 65 - 70,000 people out there now and we don’t have enough oomph on this PA.’ There was nothing we could do, you know, a couple hours before we were supposed to step on stage. So we just took the attitude that we’re just gonna go out there and have a kick-ass time. We’re not going to be able to hear each other; it’s all gonna be on muscle memory.”
“And you can see it on the tapes—that’s exactly what we did. We just had a really good time. This was a concert that had been brought out, in my mind, illegally at one point, and it had never been mixed. Nobody could find the master tapes for the audio. Nobody could find the visual tapes that had been filmed. So for years and years we hunted for this thing. And this has always been, as I put it, an itch I could never scratch. I needed to put this right, to get a decent sound on this thing. And I think we absolutely achieved that. So thank God they did find the tapes, of both the audio and visual, and we were able to put this together.”
As for the recent film, a completely stylish and thoughtful documentary brimming with new private insights about the fallen Phil Lynott, taken from us January 4th, 1986, Scott says that it portrays “the personality everybody needs to know. One of the main thrusts of this documentary is where Phil came from, and what he turned him into. And what I mean by that is, when Phil was just a tiny little infant… his mother actually gave birth to him when out of wedlock. You’ve got to think about back in England and Ireland, back in the ‘50s. This was the sin of sins. You did not give birth to children out of wedlock. So she flew to Ireland with baby Phil and basically her mother brought Phil up in Dublin there. That’s the way he grew up in his formative years. His grandmother really kind of turned into his mother. Plus he had no father, and that can be pretty devastating on people, right?”
“And thirdly, when you look at pictures, you will not see another coloured person in any of those pictures. I experienced that firsthand in Ireland, first couple of tours that I did. In England it’s the multi-verse, where we live with a variety of skin colour. It’s just everywhere in England, right? In the United States, same thing. But in Ireland back then, there were no black people. And I have often wondered to myself, how hard was that? You know, you can either go one of two ways: either turn into a total prick and hate the world, right? Or you can turn out to be what Phil turned out to be, just really talented. We have this bigger than life personality that would sit down and talk with anybody about anything. You got the right path from Phil, which was great.”
One of the other interesting things about the movie is this constant dichotomy between Phil as a private person and loving the limelight. Chuckles Scott, “I never saw him as a shy person at all. Really, it just wasn’t in his DNA. I mean, probably to some people he seemed shy, but that was just still in his more kinder moments. Not being so loud and vivacious and all of that. But he had a huge personality. And that’s what people really loved about him. He had a big personality but without being arrogant about it.” 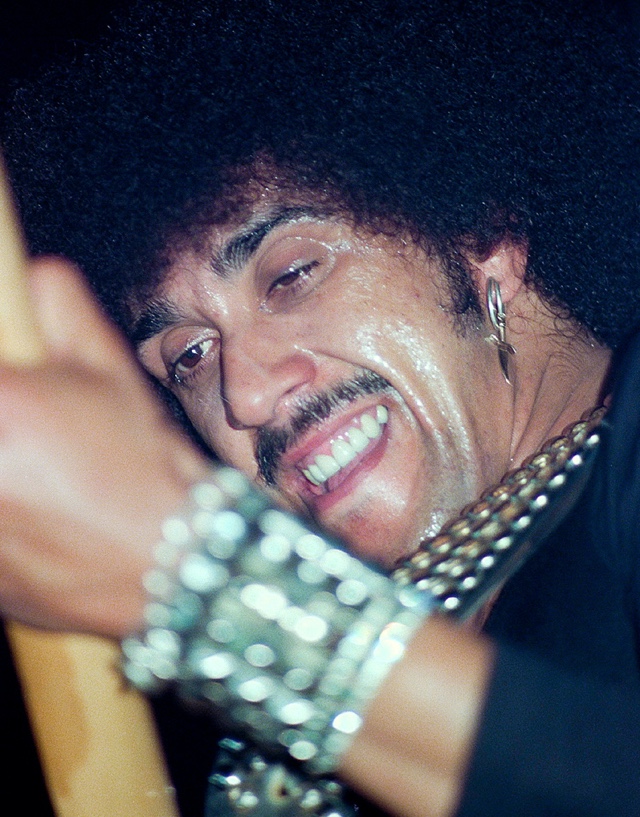 “But yeah, Phil wanted as much publicity as he could get (laughs). He wanted to see his name as in as many newspapers, magazines… he wanted his picture taken all the time, which really kind of got on the rest of ours’ tits. Because you’d go in and you’d do a photo session, which probably should have taken a couple of hours, but we’d be in there for like five and six hours, doing the different poses. It has to be perfect and everybody has to look great, blah blah, blah. So you got worn out with these photo sessions. But that was Phil—he loved being in front of the camera and the camera loved him at the same time.”
“Phil loved all that,” replies Gorham, asked about another strong story beat in the film, his marriage to Caroline and the ensuing arrivals of Sarah and Cathleen. “The children thing… oh, my God. I didn’t know he was going to respond like this when Caroline had Sarah. I’d never seen Phil being like this. ‘Oh, my God, I’m a father. Can you believe this? I’m a father!’ And we were in Dublin. He went to the tobacconist and bought three or four huge boxes of cigars with the little band on it saying, ‘It’s a girl.’ And we hit every—and I mean it—every single pub on Grafton Street and more, you know, handing out these cigars. I could see how absolutely proud he was that he was a father. ‘Look what I’ve done.’ ‘Well, Phil, it was Caroline that actually did it, you know? You’re handing the cigars out, but you had the fun side of it.’ He was a great father; he loved those kids. He wrote songs about them and all that. I wasn’t quite sure if sort of image-wise we should include songs about our children on the album. But when I heard ‘Sarah’ and the way it came out… it wasn’t really destined for the album, Black Rose, but I convinced him. I said, ‘This is a beautiful song. This has got to go on the album.’ So he said, ‘Okay, let’s put it on’ and it became a hit song—because it was a beautiful song.”
Expect more beautiful songs (even though Phil’s away) when Scott picks his partners for a new live lineup of Thin Lizzy. But in the meantime, check out the fine film and the fiery new live album, both excellent primers for a deeper appreciation of the touring dates to come.