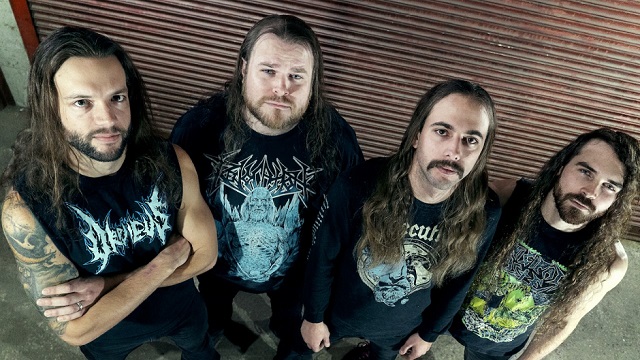 “The moon blocks out the sun, bringing nightmare to life. Born from a lake of blood, eclipse eternal night.”

Following up on the success of their 2018 EP Mortal Insolence, the first to see bassist Stephen Behrendt make the transition to lead vocal duties, Nightmare Eclipse gnaws, scrapes and shreds the senses, adopting the very best of a bygone era of thrash melded with death metal sensibilities and a decidedly modern finish.

Behrendt caught up with Brave Words for a deep dive into the new album (out August 27 through M-Theory Audio), Wisconsin’s metal community, his friendship with fellow Sheboygan greats Morbid Saint, his definitive metal record and much more!

BraveWords: Five years since your first LP Subterranean Terror. We can’t imagine anyone would plan to release their sophomore album during a pandemic, but roll with the punches right? Has this entire album process been somewhat surreal?

Stephen Behrendt: “Oh yeah, it totally is. So we did our first album, I think I was like 2016. That one we spent like a year or so writing and then finally got around to recording it and playing it and we had a lineup change and then I took over on vocals. It was like we got to get something out with my voice on it so people don't buy this album and they're like, what's going on? That's not what I heard live! So we did the EP and right away after that we started tracking the full length. M-Theory picked us up and we're like oh this is sweet. We're like a real band now!”

BraveWords: This is the first proper album with you on lead vocals. Was that a tough transition? Obviously taking up that role in addition to bass is a whole other ballgame.

Stephen Behrendt: “It was weird. So our previous vocalist we had kicked out. We were having really bad commitment issues and stuff like that. So we're like hey man, we're just going to move forward without you. And I was like well, until we find a full time vocalist, I'm already doing back-ups and I know all the words for the songs. I'll give it a shot, see what happens. And then like two weeks later was my first show doing vocals. So I wasn't really sure what to expect from it. It wasn't the greatest, but I was like eh, this is what we got. If I keep doing it it's going to get better, hopefully. And then after that it kind of just became second nature to be doing it all the time.” 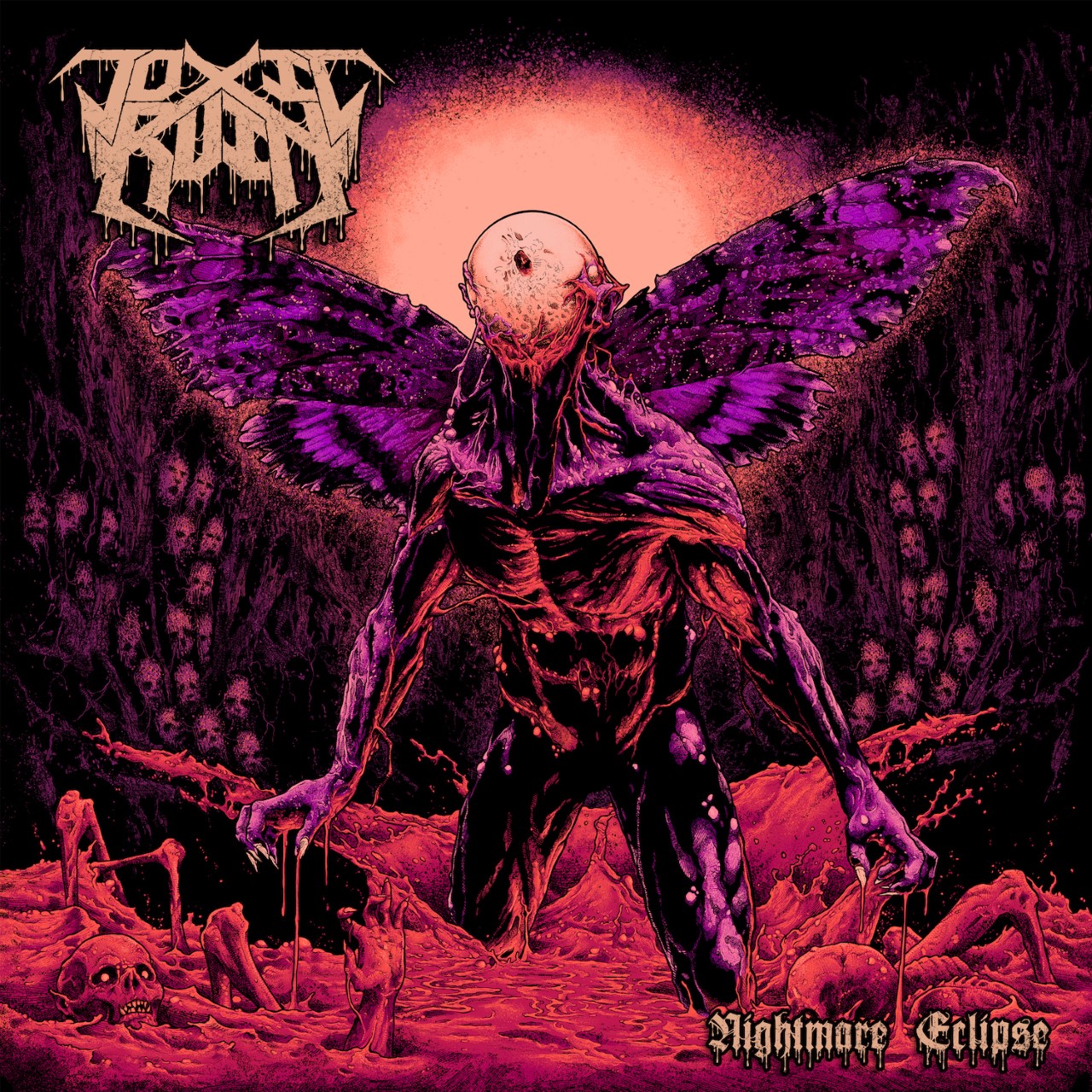 BraveWords: I always get the sense with this band that there are multiple influences at play. You get the obvious; the thrash, death metal, but there are some really melodic hooks at points, real big sweeping riffs. Then back to the real Morbid Saint type brutality.

Stephen Behrendt: “We practice like twenty feet from them (Morbid Saint). We see them all the time. We'll be walking out from practice and we go hey Jay how's it going? Pretty good, getting ready to start! I'm like, good luck. See you later!

“I'm like an old school metal guy. I love Iron Maiden, Queensrÿche, Judas Priest. I'm super big into like sick falsettos and ripping guitar solos. I wish I could sing like that. I definitely can't. And it's terrible when I try it (laughs). That's kind of more my realm, the old school stuff, but then I'm also big into thrash. I don't get too much into death metal, but I've listened to a lot of death metal recently actually. Our rhythm guitarist Blake, he's pretty much just a straight up thrash guy. Everything from any era of thrash he just loves it. So that's kind of where he gets his writing style from. And then our other guitarist and our drummer kind of have a more modern day death metal/thrash metal type influence to them. So everything kind of just melts together into what we have now.

“Another thing we were having with our (ex) vocalist is we kind of felt like he wasn't going to be able to keep up with the direction we were going in. Not that he couldn't physically do it, just how long would it take him to get to that point? We didn't really plan for everything to kind of go the way it's going writing wise, but we want to walk that line where they're like this is still thrash metal, but this riff is super heavy. Like this is a death metal song, or there's a Maiden melody in there. We just want to bring all our influences into one. We're kind of in a demo stage right now where we're just writing riffs and we save them in a riff bank and just piece everything together for our demos. We're just trying to write the heaviest e-standard tuning album that we can. You just go from there. To us it's like if it doesn't groove and it's not heavy enough in e-standard we'll just save it for something else or you keep that riff for a side project type thing. And that's just kind of the way we work. We just want to write heavy, fast metal. Kind of just breaking a genre barrier. I mean, we call ourselves a thrash metal band, but it's kind of more walking the death metal line now I feel like.”

BraveWords: Obviously there are some major names in metal we know of from Wisconsin. You mentioned Morbid Saint, and of course there’s Jungle Rot, to name a few. Were you aware or a part of any particular heavy scene there when you were coming up?

Stephen Behrendt: “I don't know if you ever heard of Micawber, a death metal band from around here. I grew up with all those guys. So in high school I was always at their shows. I never had been to a Morbid Saint show. I don't think they were playing when I was in high school. I think it was right before they decided to come back. I don't think I would have ever gone to see Jungle Rot beforehand. I just never really got into them at that point in my life. But I had heard of Morbid Saint and I had looked up the stuff they did when I was learning how to play and stuff like that. The first time I met Jay was really a weird experience for me. I'm like shit that's Jay from Morbid Saint! I'm talking to him and he’s right here! He practices right there! It was really weird. And now it's like we're buddies and talk all the time.

“Geoff Bub from Jungle Rot is from the Sheboygan area. So he'll come up to a local show every once in a while. And I talk to him on Facebook every couple of months to see how it's going. So it's really weird how, just being this young kid who loved metal and decided to start playing it and now ten years later, this is where I'm at where I'm talking to people I looked up to and considering them friends. It's just really surreal for me. I never thought I would get this far in my musical career. Now, obviously I want to go a lot further. But it was always like this is the dream, this is where I want to get to. And now I'm living my six year old dream. It's crazy.” 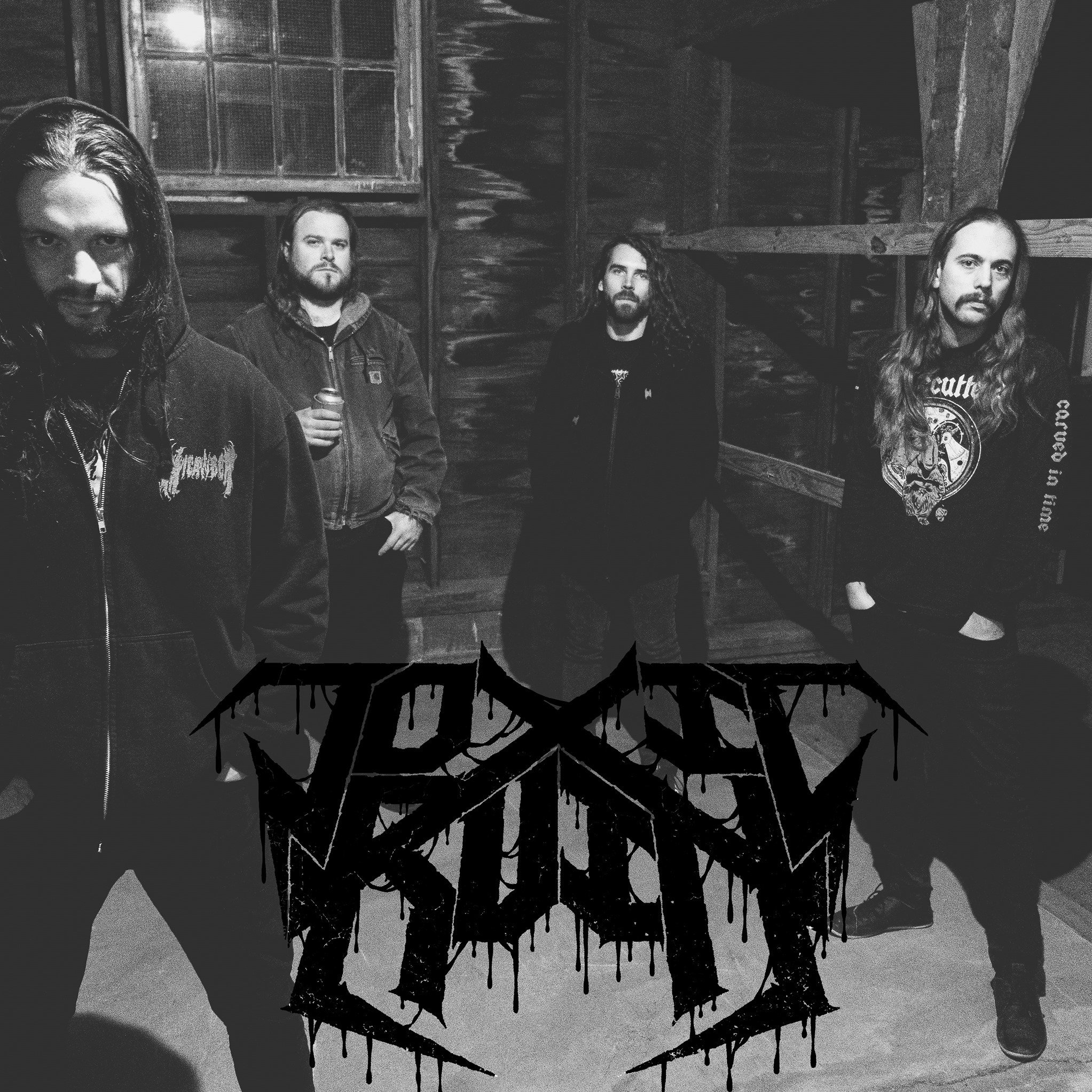 BraveWords: Is it the type of thing, coming from a smaller state heavy-wise than say a Florida or California, there’s a tighter, more supportive group of artists there? I imagine you all bump into each other on occasion.

Stephen Behrendt: “A lot of the bands that we play with, like especially the Midwest Wisconsin scene, everybody knows everybody. Everybody wants to play shows with everybody. If we get offered a show with any band in the area we're like oh yeah, love those guys! We haven't played with them in a while, let's take that one or sorry guys, we're already playing that city like next month, get a hold of us next time or we'll get a hold of you ... Anybody who's on a metal show, you know who's playing and you know what to expect.

“So it's pretty cool. I've been trying to get bands that we've played with outside of the state to come in and expose them to us and expose our friends to them so maybe down the line they can get out of the state and go check out some other scenes and stuff like that. It's just like a big family. Everybody gives back to everybody else and it's awesome.”

BraveWords: Looking back on those major influences for you as you leaned into metal, is there a definitive album for you that stands out above the rest? A holy grail of heavy?

Stephen Behrendt: “Operation Mindcrime. Hands down the best album ever written, in my opinion. I've listened to that album probably thousands of times. And I still, like even today, pick out stuff. Like oh, I never caught that before. This is a weird way to do things. I don't know why I didn't catch this before. I think it'll always be number one for me. A close second I think is Think This by Toxik. That album is also just flawless front to back.”

BraveWords: With Operation Mindcrime, you consistently have that record being cited as one of, if not the greatest concept album ever. How into the idea of concept records are you? The idea of a tied narrative and listening to an album front to back.

Stephen Behrendt: “Yeah, I mean, it's certainly an appeal. Like I can pick out any song and just be like this is the song today. I'm a big fan of listening to albums front to back, regardless of how it is. I mean, we try to do that too. We haven't written a concept album yet. The EP kind of had a general idea behind it, but it wasn't like every song was about the same thing and the same with this album. We have a couple of songs here and there that work together lyrically, but also there are other songs that have nothing to do with anything else on the album. So yeah, we just kind of went with let's just make every song good and hopefully any song could be a single and it's not going to do anything to deter people from listening to it front to back. We kind of wanted a what's next type thing.”

BraveWords: Five years in between albums and a global pandemic and I imagine you guys have to be itching to get back on the road. Not to get too far ahead, but given your move to vocals and the lengthy downtime for all hands recently in the business, have ideas begun to form for a third record or EP?

Stephen Behrendt: “Honestly, I'm tired of playing the songs on this next one (laughs). We haven't played many of them live, just kind of the singles we released. And last year when we were on tour we played two of them even before we decided when we were going to release the album. There's definitely already a lot flowing for the follow up to Nightmare. So I'm just going to leave it at that right now. I don't want to give away too much.”