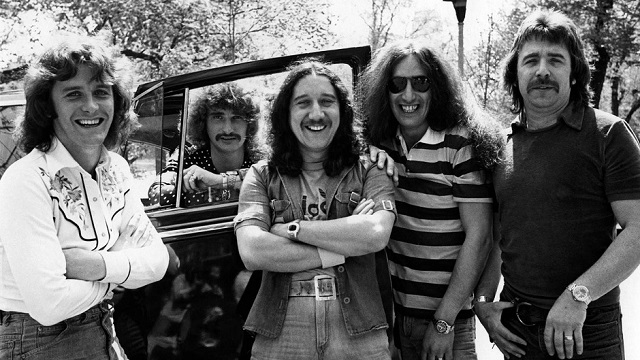 As I write this, it’s a day since we lost Uriah Heep legend Ken Hensley, key writer in the band during the classic years as well as conjurer of Heep’s grinding Hammond organ sound plus second guitarist, purveyor of all the slide, in fact, all over those great ‘70s albums. The official press release says that Hensley’s passing, at the age of 75, is after a brief illness, which rings true indeed, given that I was scheduled to talk with Ken earlier this week, and as of yesterday, was slated to speak to him on November 11. Talented, always very giving and enthusiastic about passing on lessons learned in the industry, and rich with detail in interviews, Hensley will be sadly missed.

It’s also three days since I spoke to Mick Box, and in that chat, if Box had any inkling of Ken’s condition, it wasn’t voiced. In any event, the purpose of the call was to celebrate the immense 50 Years in Rock Uriah Heep box set which gathers up all of the band’s studio material, plus one live album, a remastered LP version of The Magician’s Birthday and an image-rich 64-page book into a gorgeous package, a piece of art in itself. Also included are four “favourites” CDs, curated by Mick, Ken, Paul Newton and Lee Kerslake, who we also lost recently, specifically this past September 19, at the age of 73.

“Well, it’s 50 years, which I think is the coolest thing you could ever have,” chuckles Box… on the box! “To last 50 years in the business is great, and still, it’s only a marker, because we’re looking at new albums and moving on beyond that. So I think that’s the most impressive thing of all. You know, not many bands have achieved that, so we’re very proud of the fact. And it’s a good body of work—I’m very proud of it. I think they did a marvellous job, in all honesty. They don’t own everything, so they had to lease it or whatever. So all power to them for getting it together. It wasn’t an easy job.”

Asked about the songs he chose for his own personal corner of the box, Mick says, “You wanna know the honest truth? I haven’t looked at anybody else’s list. And I’ll tell you why. The record company came on and asked me for my list, and I didn’t want to be swayed by anybody else’s. So I knew that everyone would go for ‘Easy Livin’’ and ‘July Morning,’ all the hit stuff, so I felt that I would go more for the deeper cuts. I gave them a list that was too long, and they said, ‘We have to shorten this.’ And, of course, one of the songs I had there was ‘Salisbury,’ and that freed up some time moving that, but I wish it was there. It’s one of my favourite tracks.”

Odd selection, from an odd second album for the band, the first of two records that Heep would crank out in 1971. Defends Mick on this dark horse record, “Creatively, we were just letting ourselves go where we needed to go. We didn’t have any preconceived ideas of what the band was going to be or wasn’t going to be. If you look at that bleed from Spice to Uriah Heep, we called ourselves Spice because there were many, many spices—we didn’t want our music to be just one genre. That’s why the first album’s got a bit of folk on it, heavy metal if you like, with ‘Gypsy.’ ‘Wake Up (Set Your Sights)’ was really proggy, and it’s got ‘Lucy’s Blues,’ which was a 12-bar blues type thing. So it went from jazzy to proggy to rock to folky, bleeding through from what Spice was all about. And then going into Salisbury, we kind of had that same theme going, where we just didn’t want to be tied to anything. It was only when we actually got to Look at Yourself where we thought, hang on, we had toured a lot by then, and we realized, you know, we just want to be a straight-ahead rock band.”

The novel idea with respect to compiling a favourites disc had Mick necessarily surveying the band’s two dozen studio albums. Comments Box, “I never listen to any Heep music at all. It’s only when something like this comes up that I’ll put it on and have a listen and put it in the car or something. And I think what surprised me most is how good it all was. There’s a lot of diversity there but it’s all good. And I was really surprised. You’re popping long, ‘Oh yeah, that’s good!’ (laughs). ‘Look at that solo; I like that one.’ There was nothing where I went, ‘Oh, I wish we buried that.’ The only songs I ever felt like that about, to be brutally honest, Martin, it’s things like on Abominog, ‘On The Rebound,’ for instance. Around that era, the record company were playing their hand, saying if we don’t record the song, then we’ll pull the finances out. So we were kind of forced into a few songs at that particular time. I mean, ‘On The Rebound,’ good song, but it’s not very Heep. I would’ve preferred to continue on the track we had with the songs that we had, and kept it more in that market.”

Speaking of Abominog, one of Mick’s picks from that record is “Hot Persuasion.” “Yes, I thought, let’s put this on, bang, oh, that’s good, I like that. I didn’t put any more thought to it than that. ‘Hot Persuasion’ was good. I can remember back to when I was writing it in the rehearsal room, with Pete Goalby and Bob (Daisley) and Lee. Just great, a really, really, really good time. That really lifted me when I heard that again. It really took me back to those moments, if you like.”

And from 1978’s Fallen Angel… “‘Woman Of The Night’ I chose, because when I put it on, I thought, oh, that’s pretty good because that’s from an album that I thought was very pop—poppy Heep, and that was a rock one in the middle of that lot. I also had to have ‘Tears In My Eyes’ (from 1971’s Look At Yourself). That’s got some of the best slide playing that Ken ever did, on that particular song. Very rock, very real, and it sounds great.”

“Early on we had a good relationship,” continues Mick, asked about Ken. “The writing, of, say Box/Byron/Hensley, was strong. Because we were all connected creatively and in the right space and everything else. And I think Ken just took that a step further. He became very creative and was writing good songs on his own, and we sort of went that route, if you like. But he never said, ‘I’m doing this; we’re not doing this’— none of that. Whatever was brought to the table was agreeable by everybody concerned.”

“His hobby was racing cars, 100%,” answered Mick, when I asked what Ken was into outside of work. “He actually at one point has his own racing car team. But like all these things, if you’ve got a lot of money and you want to invest it and then lose it, a racing team is a good way to do it. It’s a very expensive hobby to keep going. A lot of the upkeep of the cars and drivers and the transportation from each race meeting… oh man, wicked.”

I hadn’t been asking about Ken in the past tense, but we did reminisce about Lee for a bit, passed on after a long battle with cancer. Praise be to a good buddy of all of us here at BraveWords, Jimmy Kay, along with Pat Gesualdo, who commandeered the obtaining of official RIAA record awards for Lee’s work on the first two Ozzy Osbourne albums, presented to Lee in Los Angeles as part of his induction into The Hall of Heavy Metal History—this was a dying wish fulfilled.

“Lee? What can I say?” reflects Mick. “Lee had his own style. I mean, for instance, the shuffle on ‘Easy Livin’’ is a Lee Kerslake shuffle. So many people try and play ‘Easy Livin’’ but they never get the drum pattern right. It’s just unique to Lee. It was his take on a shuffle, but it became very, very powerful. And Lee had a lot to offer. He came in, he was a good-looking boy, he was a powerhouse. He had the fastest bass drum foot I think I’ve ever heard. Way before when people started using double bass drums and double bass drum pedals, he did all that with one foot. He had a really laid-back style that just suited everything we were doing. He just fitted in 100%. Now, all the drummers prior to that each had their own thing, and I’m not knocking anyone at all. It’s just when we found Lee, he was at the top of his game. And to be honest, if you quoted back then the top five drummers in the world—rock drummers, that is—Lee’s name would be there.”

“He was a fisherman,” answers Mick, asked about Lee’s life outside of Heep. “He loved his fishing. No matter what it was, whether it was standing on a bank side or at the end of the pier or on a boat out deep-sea fishing, he just loved fishing. It was his great love.”