WARKINGS - "Our Drummer Wants All The Songs To Be About Sparta" 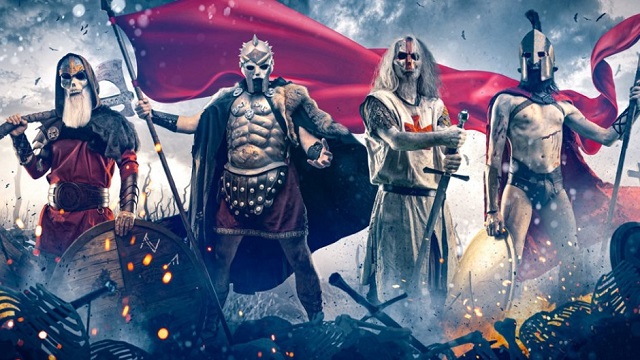 With power metal enjoying something of a resurgence in recent years - see the growing success of Sabaton and Powerwolf for proof - it's something of a surprise Warkings haven't stolen some of the spotlight. Straight outta Valhalla, the quartet made up of The Tribune (vocals), The Spartan (drums), The Crusader (guitar) and The Viking (bass) have released their third album in only four years, Revolution, another no-nonsense assault meant to drive home the glories of metal to the fans and convert the unbelievers. The only reason they've yet to draw any real blood is thanks to the ongoing pandemic that continues to screw with the world. Frustrating to be sure, but Warkings remain undaunted in their mission.

For the record, don't let the cute stage names or over-the-top imagery fool you. Although the Warkings may like to play dress-up and act the parts, their concept borrows far more from Iron Maiden-level storytelling than Manowar parody.

"There is a whole world out there that still has to discover Warkings," The Viking says. "A lot of people have never heard or heard about the band, and for us it's obvious as to why that is. We released our first album at the end of 2018 and toured for a year, then we went in to record our second album and everything got shut down. No chance to tour, so no chance for people to discover our music other than online. But, we're seeing new fans come on board every day, which we're very happy about since we're almost two years into the pandemic with no live shows. It's great so many people are interested in us and music in general."

The simple fact, which is not lost on anybody, is that fans are hungry for new music.

"The record is called Revolution for a reason," he explains. "The whole world got shut down because of COVID. If you told somebody at the end of 2019 there was a time coming when you wouldn't be allowed to leave your house, they would think it was a big joke. That became the reality, and music and art were the first things to get shut down completely. The attitude was that we don't need live shows, we don't need the cinema or the theatre. Art is something that people need, which is why we call the new record Revolution. It's our message saying that music and art is needed in the world. It's the thing that keeps people sane. That was the loose concept behind the whole record." 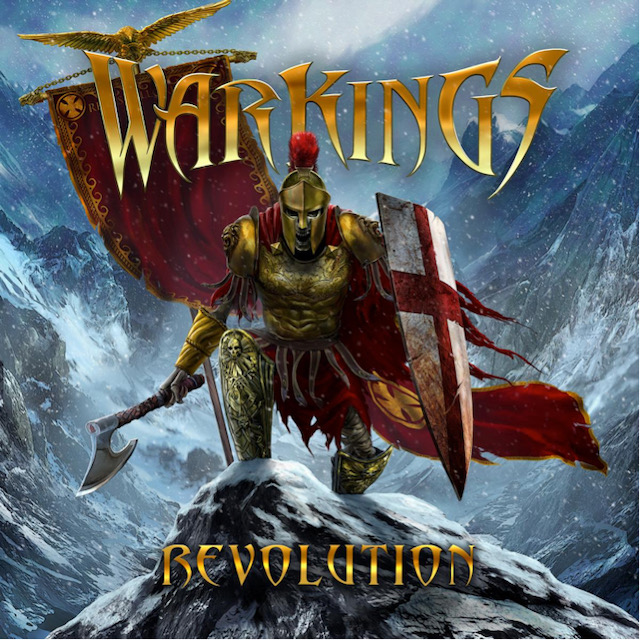 As a result of the global pandemic bringing life to a screeching halt, there is a little over a year between Revolution and the previous Warkings album, Revenge.

"The previous album came out at the end of July last year. We were supposed to play a lot of summer shows, tour in the fall of last year and the spring of this year, but everything got cancelled and there was nothing else to do. We decided to take the energy we had for touring and write some songs just to see what would happen. There was no plan to make a third album, and suddenly we had a third album ready. We called the label and told them, and they were like 'What?' We were really hyped about the new songs and the label liked them a lot, so they agreed we should put out a new album."

So, Warkings can potentially go out and do a two-hour headline show in spite of the fact they remain a support status act at this point.

"(Laughs) That's the problem. We were discussing potential setlists and I think there are going to be some hard discussions about what songs we should play live when we finally get out there again."

Credit where it's due, Revolution is a crusher if you're into Warkings' brand of power metal. The intensity and momentum behind it is unexpected given they didn't have the residual energy and related experiences of the live / touring experience to draw from. Something any seasoned musician will tell you plays a part in the creative process.

"We're surprised, too," The Viking agrees. "It's exactly what you said; normally you go on tour and those experiences influence how the songs work and evolve, and you come up with new ideas. We didn't have that this time, and I don't know if you can call it an experiment, but there was a lot of energy because we were hyped to play live. We tried to transfer that into the new songs, and it worked. But for us it really feels like we've been in the studio for two years now (laughs)."

Asked if Warkings were aiming to do anything different from Revenge with Revolution, even though both albums were clearly cut from the same cloth, The Viking offers an explanation that can be applied to every serious musician on the planet.

"As an artist I think you see the creative process as being something more spectacular than what the listener thinks of it." 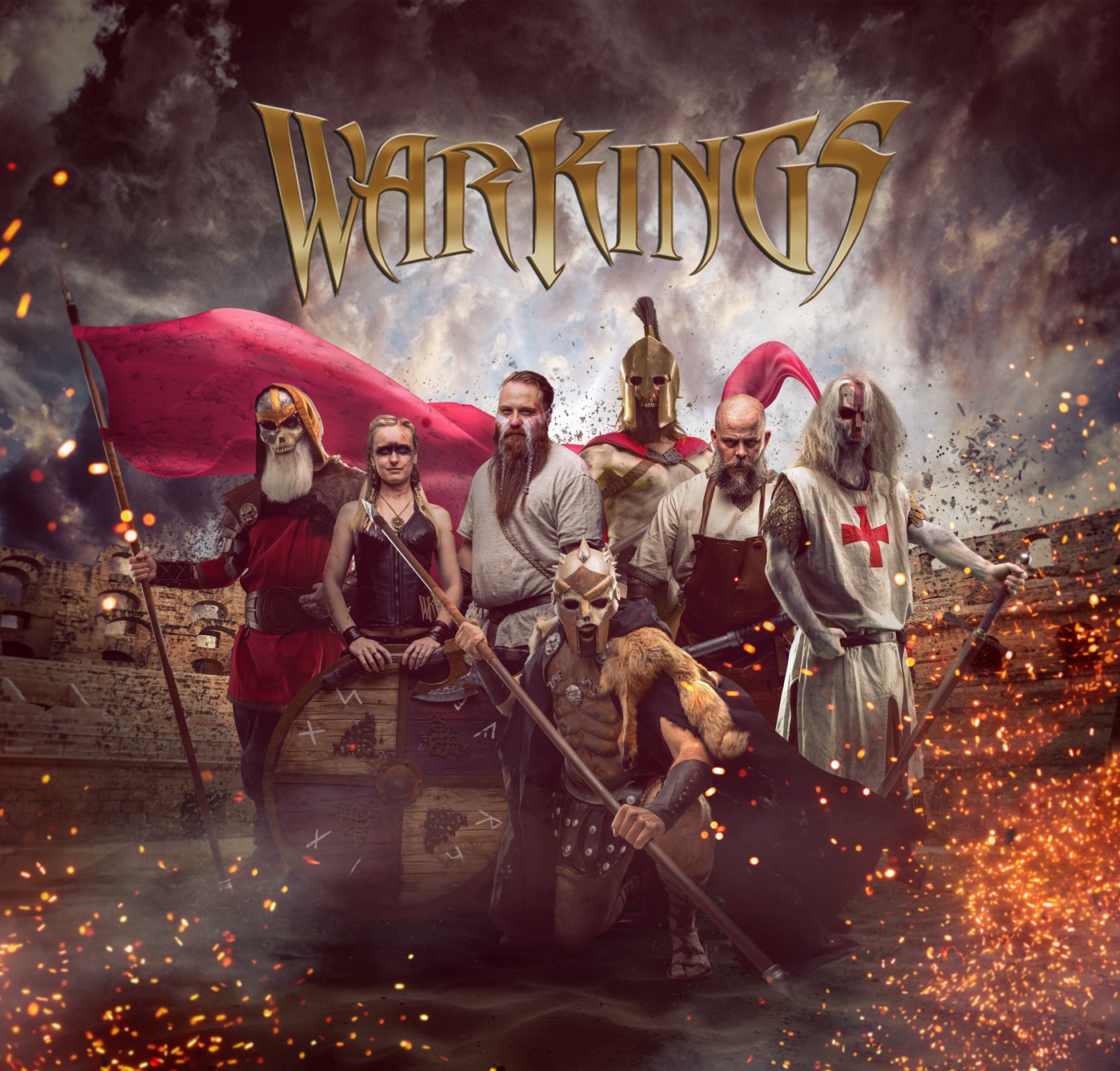 He elaborates on the Warkings mission for Revolution:

"We tried to make the new songs a bit more diverse, more dynamic. The whole idea behind the band is that because we're a metal band, we really want to have the guitars up front. This time we took one more step in that direction; we wanted the guitars to be as heavy as possible because we think the power metal genre nowadays lacks that sound. Too many keyboards and that sort of thing. Metal is based on riffs and heavy guitars, and that's what we wanted to do."

As mentioned, Warkings once again borrowed a page or three from Iron Maiden going in to write Revolution. The band concept is rooted in history, inviting even the hardest-nosed of "metal or die" headbangers to learn a thing or two along the way.

"We have songs about war and death, songs about historical figures like Spartacus and Julius Caesar, so yeah, if that's the case it's a great thing," says The Viking. "There's a lot of history out there and you can learn a lot by the way it's presented, and maybe for some people having it presented like this is more interesting. If someone gets interested in a subject they hear about through one of our songs and they decide to read up and learn more about that, that's a very cool thing."

"We have a Spartan drummer; what do you think it going to happen in case of a song like 'Sparta'? He wants all the songs to be about Sparta (laughs). We always get into fights with him because he claims it was only 300 Spartans who fought that battle (Battle Of Thermopylae in the Persian Wars), but we're not convinced. The rest of us in the band figure it was a few more than that (laughs) but it's good for the legend."

In closing, we address the real identity of Warkings frontman, The Tribune, who bears a striking vocal similarity to Sonata Arctica frontman Tony Kakko, something that can be heard all over Revolution. The Tribune is in fact the singer and founder of Serenity, Georg Neuhauser. The Viking agrees with the former, and dismisses the latter.

"That's what people say, whoever that Tony guy is. We've met a lot of interesting people in Valhalla but not that guy. Sometimes our singer likes to dress up and pretend he's the singer of another band, and if he wants to do that it's okay with us, but he will always be The Tribune (laughs)."