WOLFHEART – The Fuck It Principle 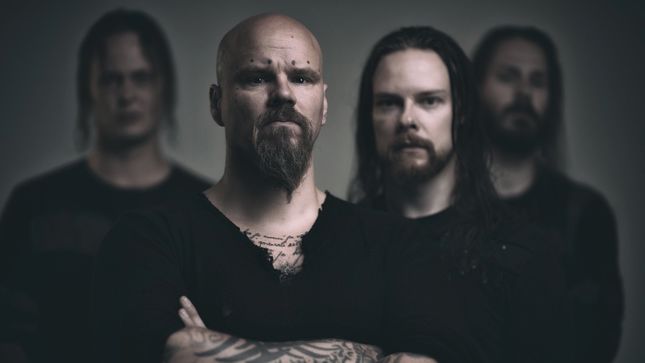 "The only similarity between me and Devin Townsend is that we're both bald."

So says Wolfheart frontman / founder Tuomas Saukkonen as this interview kicks off, reacting to the suggestions that he is the Finnish counterpart to Canada's own Hevy Devy. It's a comparison meant as and taken as a compliment, made in reference to Saukkonen's assortment of bands / projects that have surfaced since he started making noise with Before The Dawn in 1999. Dawn Of Solace, Black Sun Aeon, Routasielu and The Final Harvest also bear his name, all of them a testament to Saukkonen's drive and need to create music. Things came to a head in 2013, however, when he shut everything down to focus on a new solo venture, Wolfheart. Since then he has stayed the course, building it into a real band, and it is arguably his most successful work to date. Wolfheart's fifth album, Wolves Of Karelia, is a short but melodic death metal sweet record, brandishing the band's now signature sound in unpredictable fashion. Saukkonen will be the first to say he's come a long way over the past 20 years.

"Dawn Of Solace was already fucked up back in 2007 thanks to being on a shitty Spanish label," Saukkonen begins, looking back on his mindset of stopping all his other projects for Wolfheart. "And with Before The Dawn there were issues with labels, with band members, so even before the last album came out the label knew that would be the last one for them. All the other bands that I had running alongside Before The Dawn, they were just side projects to basically keep me balanced because I was getting frustrated with the main band. So, it made more sense to me to drop everything and take a break from the music business for a while. I released the first Wolfheart album on my own and then started to talk to the labels again. Looking back now, it was a really good decision to do things that way. The more shitty contracts you sign the wiser you get. It's called learning things the hard way (laughs)."

"It was more like a mental thing. I don't need those side projects to keep myself distracted from being frustrated by the main band. Nothing worked with Before The Dawn, and things are on a completely different level with Wolfheart. I don't need another outlet for additional music. Of course, now that we're all being forced to stay home there's going to be some kind of side project again (laughs), but for completely different reasons."

Wolfheart started as a solo project - something that worked quite well for Saukkonen at the time - and thus he remains the main creative force within its ranks, which is intentional.

"I write all the music and I handle everything on the artistic side, but my drummer Joonas (Kauppinen) - who has been with me since Wolfheart played its first gig - he's the CEO of the company behind the band. He basically runs everything else; he runs the business side of things and takes care of the numbers. Even though Joonas doesn't contribute to the songwriting, we wouldn't be here without him. This is my opinion, but a real band is not that everyone brings 25% to the table. Someone always brings more, someone always brings less, but that doesn't make them less equal. Wolfheart is a band now; I'm just the songwriter in the band, let's put it that way." 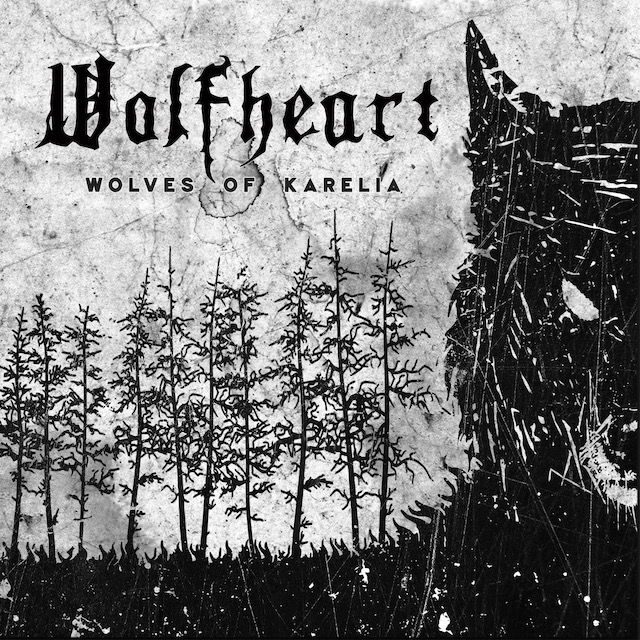 "Joonas is the CEO of another company as his main job," Saukkonen continues, "so dealing with all the business stuff comes very naturally to him. For the last Wolfheart album (Constellation Of

The Black Light) we did 140 gigs in 10 months, and right after that I composed both the new Wolfheart album and the new Dawn Of Solace album. And then I did seven music videos (laughs). There is no way I would have been able to do all that if I had to run the business side as well. It's vital to have that support so I can be creative."

The more time(s) you dedicate to giving Wolves Of Karelia a listen, you discover it is a multi-faceted melodic death metal gem. It crushes, it pummels, but there are beautiful open spaces between the walls of sound, and it never stays in one place for too long, allowing for some refreshingly unpredictable moments. The album sounds like Saukkonen was focused to a fault on delivering a well-planned attack

"Completely the opposite, actually," he says. "This was definitely one of my favourite albums to write and record, and that's connected to the huge number of gigs we did for the previous album. I don't like to write on the road at all because I need space, I need the long nights, and that never happens on a tour. I didn't write anything for 10 months, so my head was like a balloon after all that time because it was full of musical ideas and ready to explode. I didn't have the energy to write or record when we were home between the tours. That was the last thing I wanted to do. When I finally did have the time to sit down and write it was like opening a floodgate. All the ideas that I had in mind, and just the excitement of being able to play something other than the same songs we were doing on tour... I ended up writing the new album in six weeks. It was a unique situation for me to be in. The focus on writing the new songs was a lot deeper and a lot more intense that I expected." 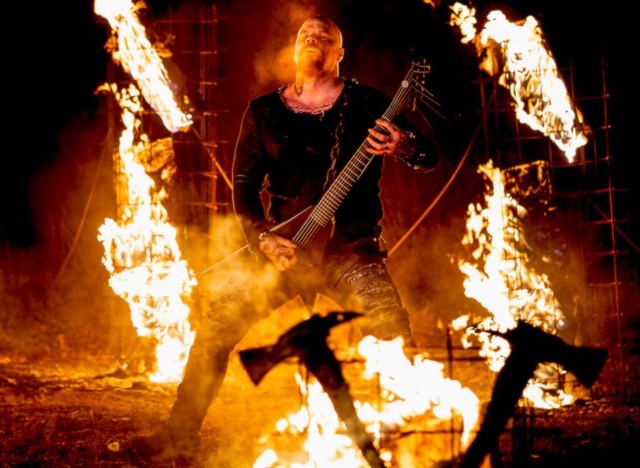 "I didn't do any pre-production, I didn't record any demos, and I prefer to work that way," he adds. "The first Wolfheart album was very similar in that I didn't have a band, so I didn't need to record my ideas to explain them to anyone else. Now that I have band members, they weren't super happy about me being this impulsive because they didn't get to prepare as much as they normally would, and a lot of ideas came on the spot. But, they're good musicians and I know they can get the job done."

That said, listening to bludgeoning tracks like "Hail Of Steel" and "The Hammer" back-to-back against the acoustic interlude of "Eye Of The Storm", the thrashing "Born From Fire" and schizophrenic folk / black metal / power metal closing track "Ashes", it seems that Saukkonen was operating on The Fuck It Principle.

"Because I want to sound like a professional musician, I don't really want to use the term 'fuck it' but that's exactly what happened (laughs). ‘Ashes' is actually a good example of that. I wrote that song in the studio when we were recording and I knew I had to have a song to end the album. I knew how I wanted to build it up, I had the riffs for it. I'm lucky enough to have two sound engineers who I always work with - we've done 13 albums together - so they know how I work, which makes me even worse with every album we do (laughs). I make a lot of last minute changes, the schedule in the studio is pretty flexible except for the deadline, so that gives me the possibility to be very impulsive. Apparently, that can be a little frustrating for the sound engineers and / or my band members (laughs). For this album I'm was in such a creative place that you could have woken me up in at four the morning, put a gun to my head and tell me to write a fast song, and I'd be like 'Hold my energy drink...'"

"There are a lot of strange song structures on the new album, and it sounds like I didn't stop to think too much about what I was doing. I didn't stop to analyze things because I was too excited to get onto the next song. Music shouldn't be analyzed. The good thing is that my sound engineers will give me super blunt feedback if they think I've written a song that's shitty. The point is, it's never a case of me messing around in the studio, and I do ask for opinions from these people that I've worked with for such a long time. So, it's not actually as chaotic in the studio as I may have made it sound (laughs)."

Perhaps one of Wolves Of Karelia's added strengths is that Saukkonen opted to keep it to eight tracks, one of which is a short instrumental. There is no window dressing or smoke and mirrors to cover any holes... because there aren't any.

"I don't like listening to albums that are too long," he explains, "and when you write more than about 40 minutes it's really difficult to keep awy from putting in filler tracks. I felt these songs together created a really good package, so I didn't have the need to make it longer. And when I get inspired I write to make an album, not just a bunch of songs and then pick some from a pile for the album. All that creativity is serving the making of the album." 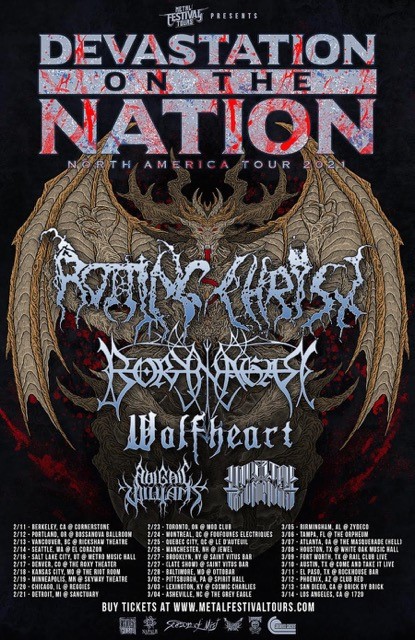 At this point, Wolfheart fans are painfully aware the band's 2020 North American tour with Rotting Christ, Borknagar, Abigail Williams, and Imperial Triumphant had to be postponed due to the ongoing Coronavirus pandemic. Dubbed Devastation On The Nation, the tour has been re-booked for 2021 with the line-up completely intact and the routing remaining almost the exact same at the same time of year, which is nothing short of a miracle given all the moving parts.

"That's a remarkable thing, being able to keep almost the same schedule with the same package," Saukkonen agrees. "Everything was and is insanely well organized, and where we got really lucky was that the working visas for the tour expire four days after the new dates are done. You can only apply for a one year visa, so if the second attempt to book this tour would have been two weeks later we would have been fucked. And the whole damage control situation at home was good for us because the airline gave us the money back for our flights since they had to cancel them, not us. Things went a lot easier for us than they could have, so we are very lucky."