World Without Heroes... A Year Without Concerts

Like you, I'm infected...addicted...I've got the most virulent form of rock n roll disease, metal mania! Have for a long time and been going to see shows, for more than 40 years. It's in my blood, While it pales in comparisons to the truly horrific casualties of this pandemic: lost jobs, food insecurity, eviction/forced homelessness, hospitalization and ultimately, death, without an adequate substitute and/or replacement, the psychological effects of deprivation can also be debilitating. There's more to life than merely existing and those that have survived wars, totalitarian strife, even sieges created by natural disasters, can end up living with the mental aftermath, well beyond the scope of the event's physical timeline. Thankfully, those tend to be rare (but not unheard of) events in the western world. which is why so many are "struggling" with the sudden loss of their "lives" be it sports, travel, the arts or heavy metal. We're all in this together and with the help of a couple of friends, hope to shed some light on what the future may hold, as well as letting you know, you're not alone. We all dream that one day it will return to what it was before, but in all probability, that's just a myth. As life "reopens" (with better or worse initial consequences) live music is still a long way's off, on this continent, and it won't be a simple, magic moment, once full participation is allowed. Night Demon are seemingly ALWAYS on tour, somewhere in the world, every year. Now suddenly homebound, founder/frontman Jarvis Leatherby sees the current situation like this, "I think 2020 is a wash. We (tentatively) have a festival in Mexico, in September. This is already the postponed date, and the promoters say they expect paperwork from their government 'any day now,' stating that the festival is safe to happen, and we can all show up and perform. At this point, I will believe it when I see it. It seems like everything is back to normal, then the next day you hear rumors of international travel bans, or 2 weeks mandatory quarantine. We can't roll  with that kind of uncertainty. We also have some east coast stuff, in early November, but I doubt that will happen. Not much else we can do, but we are ready to go, when able."

Destruction founding bassist/frontman Schmier is always outspoken and he didn't mince words when speaking to German newspaper Badishe Zeitung. "The bad thing about Corona is not (the disease), but what Corona brought with him: the general madness, with conspiracy theories, all the misinformation and ignorance. In the US, it was said that there would be no concerts until there was a vaccine. The result of a survey was that 60 percent of Americans (would) only go to concerts again when vaccines are available." The band applied for and received emergency government aid. "It definitely helped," states the hulking tattooed figure. "We have running costs that need to be paid. The help was the basic requirement (so) that the band can continue to exist." In some countries, can image the hue and cry if federal assistance (however eligible and/or warranted) went to metal musicians! Not a bone of contention in Germany, "We are a civil legal company and we pay taxes. We have never received a penny of unemployment benefits, we have always worked solidly. At first, I thought it would be more complicated, government aid. We were among the first to request it. That was quick and unbureaucratic." Unfortunately, lots of needy outfits, from various points on the globe, will receive nothing. Leatherby insists Night Demon's much ballyhooed monthly vinyl single release doesn't help pay the bills. "No money actually. 7" singles are insanely expensive to produce these days, and being on a major, they get even more expensive, but they are a nice business card. Fans love them and that's what we are here to do, spread the love." 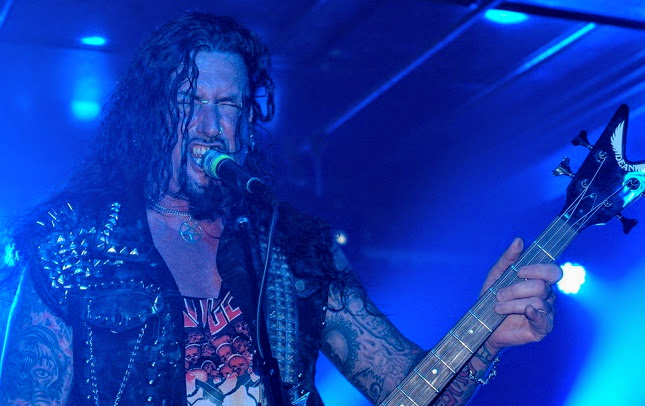 Assuming (rather naively) that once live concerts are given the "all clear," that all previous fans still have the time and wherewithal to attend (ignoring lost income/jobs, redirected/new priorities, etc.) it could be a logistical nightmare of too many bands and not enough dates/places to play. Sitting dormant, for the best part of a year, all acts will be chomping at the bit to play (make some money, remain viable, etc.). Like any business, inevitably, some bands will never return from the layoff. Assuming they still want to go on the road (with all its financial pitfalls, now inevitably with even fewer places to play, due to closures and/or those unwilling/unable to make a go of it with reduced capacity restrictions in place), it wont be just getting back out there. With virtually ALL music sidelined, regardless of genre, it will be something of a bloodbath, booking dates for the available venues, few of which are solely "metal clubs", at least in North America. Even if we rule out "competition" for calendar space from non-metal entities, in the first few months of reactivation, the flood of shows will drain fans' (somewhat strained) wallets even further. Surely all will not be SRO attendance, causing the struggling, re-emerging club owner to think twice about booking a "metal" show in the future.

As one invested in the longevity of the music we love, I'm constantly attempting to discover and support up and coming acts. And for them, I fear the most. Iron Maiden and Metallica can ride out this storm. Much like the cancellation of the entire minor league baseball season, a nationwide affiliation of smaller operations, not only important to to the viability of small town America, players striving to make the "Big Leagues" won't have the chance (some maybe never again) to strut their stuff and improve their lot, grabbing a scout's (reviewer's) eye/ear and moving to the next tier, and maybe develop a career, doing what they love. Leatherby's Management company, Iron Grip oversees smaller acts. Asked what advice he'd give, during this uncertainty, he clarifies, "The best advice I could give is gut-check yourself. If you don't come out with the answer: 'This is who you really are, at your core,' then get out now! Go build an app or something, because we are in for a long and painful struggle. Some of us were born for this, so bring it on!"

While metalheads are an incredibly loyal fanbase, and often provide an extra boost to a club's bottom line, via the bar, the reality is, most small bands, playing bars, don't make any money from touring. Sleeping on other people's floors, pinching pennies to get from town to town (hence the van break-down/crashes you read about online, tending to scuttle the remaining dates) measly receipts and merch sales are plowed back into road expenses (gas, tolls, etc), keeping the crew happy (if not truly employed) and the occasional splurge on food and maybe a hotel room/shower. Once home, they return to some sort of underemployed job, the kind that can be discarded on a moment's notice (to go ontour) and just as easily picked up again, later. In that regard, the lack of playing live, is not greatly impacting these bands, financially. However, those that are/were on the cusp of something bigger: a hot new release, sudden gain in notoriety, high profile tour/festival appearance, will be impacted by the re-start, pushed aside by the wave of better-known names and shrinking column space allotted them, in mags and online. Please, don't forget about the "baby bands"! "We've all been impacted," corrects Leatherby. "From talking daily with friends in the biz, it looks like the mid level bands will be the ones to suffer the most and be the ones to drop out first.  It will be the huge bands, and the bands still willing to get in a van and go play that will be the ones who carry the torch. The casino rock show cash grab weekend warrior hair metal bands are gonna have to eat shit for a while." 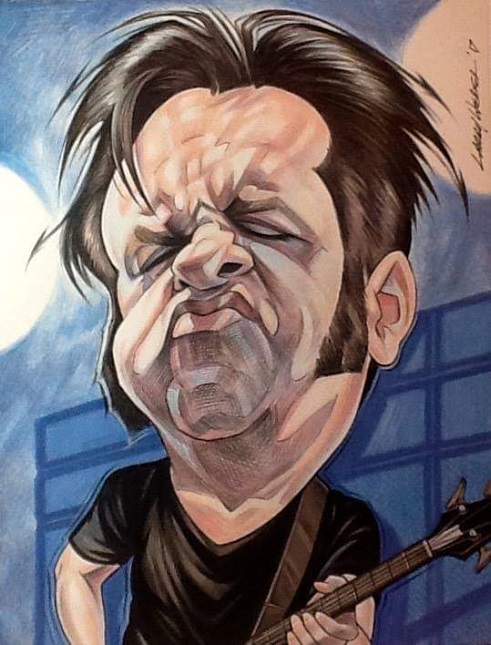 No moshing, No crowd surfing. Social distancing concerts? Been to a few in my lifetime, not that they were planned as such. Most notably, an early '80s performance by the NWOBHM band, Tank, at the Show Place in Dover, NJ. Not well advertised, there was plenty of room: enough for each patron to be in the front row (no barricade) and lay their arms on the chest high stage, while the band played. Also similarly sparse attendance at the first Rage Against The Machine show, at minuscule, triangle shaped JC Dobbs, on Philly's famous South Street. So few people came that at the end of the night, the Epic rep (who'd invited me) told me to pack up, and take home, about 8 promotional copies of the debut CD (that were being given away, free, to all attendees). Based on the few concerts, with fans, that have recently taken place, overseas, there 's a good possibility that tickets will not only be scarce, but prices will be artificially inflated. As restrictions created a 25-50% smaller crowd, promoters/venues will probably seek to make up the difference with a higher face value on the tickets. That, and some might seek to gain back as much revenue, as quickly as possible (to avoid foreclosure, financial ruin, real or imagined).

For a while, going to a concert will be a luxury, in more ways than one.Vehemently opposed to gimmicks, like drive-in concerts, Destruction is scheduled to play back-to-back nights, July 4th weekend, at the famous Z, in Pratteln, Switzerland. "These are the first steps. It won't be financially worth it," says Schmier, speaking for the promoters. "The (Swiss venue) is big and has a capacity of 1,500 guests. If 300 people come in, everyone can keep their distance. If you don't want to take any risks, you can keep your distance and put on a mask. Social distancing is basically just as possible as when shopping.  There will soon be concerts for up to 500 people. From this size, it is slowly becoming economical again. If you have no hope, then you can't go forward. If everyone behaves reasonably, the risk of infection is manageable." Night Demon's bassist concurs. "I only want to go back if I'm playing in front of a live audience. I have no interest in being a band that plays live stream concerts, or plays a drive in concert. Those things are a horrible representation of what a band like Night Demon really brings to a room. I do however think the scene was getting slightly stale, so I take this break as a blessing, and look forward to getting back to playing in front of people again, and adding that rebellious element of danger that belongs in rock and roll in the first place.".