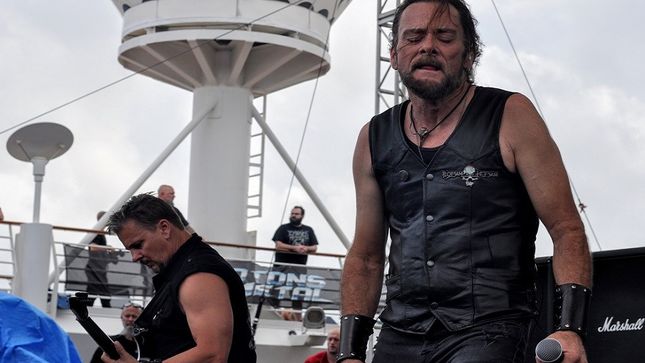 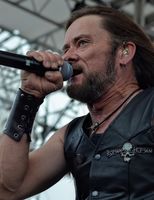 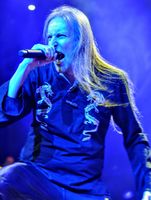 Apologies to the late Robin Williams, but "Good Morning Coz-u-mel!" Ship is docked at the Mexican resort town. Some band members host in-land excursions (tour of Mayan ruins, snorkeling, dolphin rides, etc.), which require an additional fee. Most shop the souvenir market (sombreros seem a popular choice), eat/drink or maybe check out some local acts at the accommodating Hard Rock Cafe. Back onboard by the later afternoon, we're under sail by 5 PM, when the day's musical schedule finally kicks off.

Lead slot on the pool deck sees Flotsam & Jetsam play to a packed house, with heavy doses of the debut album. While Seph's onstage with Ihsahn, I opt for Atheist, then a bit of Wintersun (the moniker all the more improbable in this climate). Reports filter to the decks below about fierce (45 mph) winds, threatening to topple the lighting rig and thus, topside activities are delayed, while they remove the attached promotional banners (act as sails, catching the breeze). We can all feel the boat pitch, at times violently from side-to-side as it cruises at 18 knots, in choppy seas. When Devin Townsend takes the stage, he admits the elements have rendered his backing tracks and keyboards inoperative, yet he decides to take it all in stride and provides a lighthearted, joke filled performance (even more than usual). Another dose of personal faves Grave Digger, check in with Moonsorrow (couple of Finntroll guys pulling double duty, or is it the other way around?). The weather threatens the much ballyhooed Slaughter Of The Soul set, from At The Gates. I bag out of the smoky casino bar (legally the only indoor smoking option aboard ship, although a whiff of the hallways in the living quarters would prove otherwise) when the set is delayed by an hour. Soon after, the ship wide intercom announces, "It will begin in 5 minutes". Probably not best to send thousand or more people rushing, in the same direction, simultaneously. A complete 70K report will be posted soon.