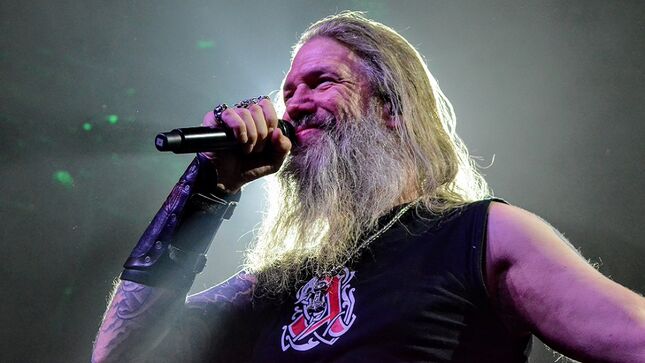 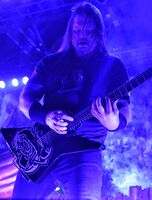 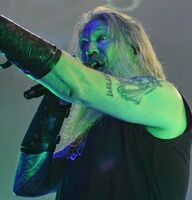 Ironic, the timing of the Philly date: days before Thanksgiving, America's celebration of a time when intolerant religious zealots (who banish or execute anyone challenging their teachings), out of fear of perishing/starvation in a new/inhospitable land, "befriend" the indigenous people and have a feast. We all know how that relationship ultimately turned out! Yet, Vikings are seen as history's villains? Always great to see the Swedes, but man did they load up on Americanized material this time around (read; last 3 albums, including the subpar Jomsviking and Berserker). In fact nine of the 15 songs aired were released in the last six years. Bit odd for a band with more than a quarter century recording history. Wish they'd rediscover the excellence of With Oden On Our Side, before it's 20th anniversary!

Cattle Decapitation actually began the night, barely enough room, at the lip of the stage. Bathed in green, with yellow streaks of light, from above, they even debuted "We Eat Our Young", off the forthcoming May 2023 release. Sort of surprisingly heavy bill, top-to-bottom, as Amon Amarth's future (despite the lineage) lies in the more melodic end of the metal spectrum. Speaking of moving forward, know the venue has to take its cut (artificially inflating merch prices), but $40-50, even for the non-headliners' wares is certainly not helping growing the genre. 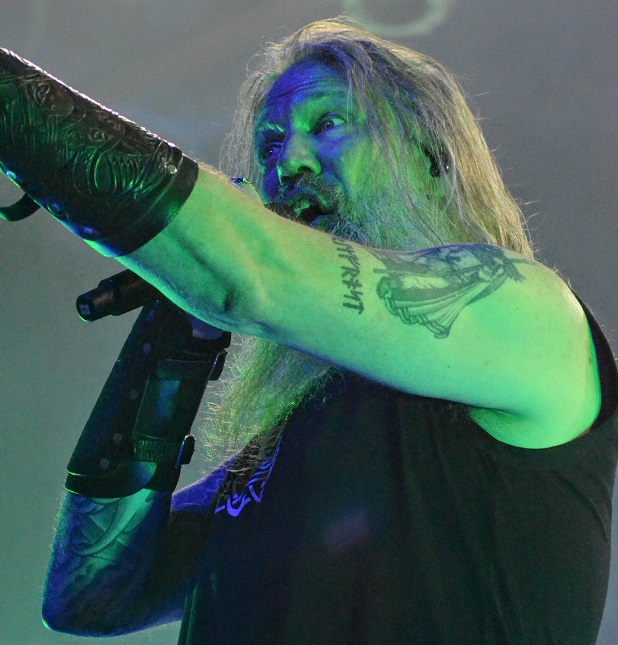 BraveWords CEO "Metal" Tim approved Obituary opted for a career spanning retrospective. Well, truthfully, there was nothing from the debut and just the Celtic Frost cover, "Circle Of The Tyrants" off Cause Of Death, but otherwise sampled a single song from most of the remaining discs and even threw in "The Wrong Time", a hint of what's to come from Dying Of Everything. Dare I say it's more catchy and traditionally structured than most older Obit material? Not sure how many death metallers recognize the "Snortin' Whiskey, Drinkin' Cocaine" intro tape, courtesy of Pat Travers, but some tasty guitarwork gets fans pumped up, nevertheless. Appropriate lead-in for opening "Redneck Stomp". Vocalist John Tardy's look seemingly never changes: knee length camo short, tour laminate dangling from the belt, and waist length hair. Watch for the new album, this January.

Beneath a backdrop depicting a human ribcage, partially constructed of surgical implements, Carcass were quick to display their wickedly sarcastic sense of humor, especially bassist/singer Jeff Walker. Even those of us who have been with Carcass since the beginning, find it hard to believe how musically adept/melodic the band is, at this point in their career. Re-purposing props from previous tours, behind the players were four small video monitors, showing an assortment of footage: autopsy/medical experiments, flames, etc. One foot on the wedge monitor, Walker often held/played his bass vertically, balanced on his thigh, as he did on "Kelly's Meat Emporium", up early in the running order. On his right was Bill Steer, contorting his hand into seemingly one of the displayed medical oddities, in order to churn out some truly twisted riffs. A mix of old and new, "Incarnated Solvent Abuse" and "This Mortal Coil" sit side-by-side with "Under The Scalpel Blade" The Heartwok album still figures prominently in the set, opening with "Buried Dreams" and finishing with the title cut. Rapid, stroboscopic lighting and swirl of bodies in the pit, the Brits are all about motion: Action Men, if you like (UK pun intended).

A rune emblazoned curtain initially shielded the Swedes from view, as the symphonic strings that introduce "Guardians Of Asgaard" wafted throughout the Fillmore. Once the "shield wall" dropped, there stood the modern day Viking warriors, a giant horned helmet serving as a drum riser, with digital flames licking from the protective headgear's eye holes. The matching staircases, leading to platforms at the back of the stage, are each intended to house a giant "stone carved" Viking figurine, standing sentry, either side of the drums. But only the biggest (roofed) venues can fit the structures. Sadly, not Philly (but look at videos from elsewhere). Speaking of imposing structures, frontman Johan Hegg worked his way around the stage, frequently atop one of the four shadowbox/risers overlooking the barricade. Rapid fire strobe pulses criss-cross the playing surface as the crowd adds their voices to the titular chorus. Look up, look down, keep your head on a pivot, as there's plenty of action on the floor, from moshing to crowd surfing (and later, a special exercise, unique to the headliner). When not stalking about, Hegg headbangs, counterclockwise, his hair and beard becoming an entangled, undecipherable blur.

The bass rumbling beat of the dimly lit "Raven's Flight" is accompanied by repeated eruptions of fog, released from a half dozen pots, located throughout the stage. Midway through, the guitarists face-off against one another, under white lights, center stage, in front of the helmet/riser. Bright green illuminated "Deceiver Of The Gods" sees a guest appearance by a spear toting berserker and more smoke/stage fog. When he addressees the audience, Hegg acknowledges, "It's been a while Philly, so let's make up for lost time." Purple and blue bathed "Oden Owns You All" is the first of three from the new Great Heathen Horde album. The blue/green title track would follow and plodding heavyweight "Find A Way Or Make One" caps the run.  Each performer mounts a stage front riser, for "The Pursuit Of Vikings", which also sees Johan pogo up & down, in time to the bouncy rhythm. Come the chorus, the line "Oden, guide our ships!" might be the most robust audience participation of the night.

Crimson, with multiple white streaks shine down on speedy punisher "Destroyer Of The Universe". Released as a stand-alone single, earlier this year, "Put Your Back Into The Oar" is shrouded in deep blue, as the sounds of lapping waves filters through the speakers, as the band temporarily abandons the stage. Then four stage front smoke/fog volcanoes erupt. As Hegg repeatedly bellows "Row!", about a third of the fans drop to the floor, sit and pantomime the rowing of a galley. The house lights illuminate the activity. Nice unscripted touch. Pulsating strobes and more volcanic spew greets "Cry Of The Black Birds". Watch carefully, as the silhouettes of flying birds appear on the video screen within the eye slits of the helmet/riser. The concluding run is newer Amon Amarth and almost exclusively from Jomsviking. "The Way of Vikings" has a pair of re-enactors engage in battle, as the Amon Amarth guys are relegated to the staircases/upper tier, standing clear of the "carnage." "First Kill" goes down a storm and the proper set concludes with "Raise Your Horns" the singer taking a swig from his alehorn side-piece, just prior.

Reentering the stage, oversize hammer of Thor, in hand, Johan stands menacingly, as a literal thunderstorm, complete with clouds of fog and flashes of lightning swirl around him. A brief chant of "Holy Shit!' erupts from those down front. Cue: "Twilight Of The Thunder God". As the intro subsides and the music kicks in, Hegg raises the weapon overhead. As fog continuously shoots skyward, the deep blue/purple lighting makes the players nearly invisible. The singer demands the fans sing along and they willingly oblige, most knowing the end of the night is at hand. Can't wait to witness the band overseas, with its pyro privileges. Some honest to goodness fire would make this spectacular. Skol!