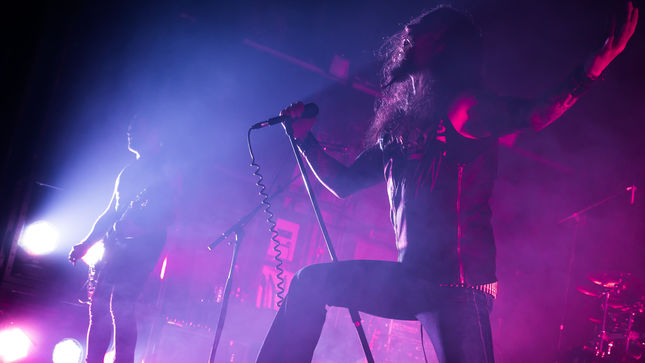 The history of Britain knows quite a few invasions from Scandinavian countries, but this one was a kind of a pleasant one: Norwegian black metal force, Dimmu Borgir, and Finnish melodic metallers, Amorphis, teamed up for a co-headline tour, supported by Wolves In The Throne Room. The whole tour is only ten shows in the UK, France, Netherlands, Switzerland and Germany, so each gig is a unique event. The tour began January 22 in London’s O2 Forum Kentish Town, historic building which decorated walls have witnessed a whole constellation of rock stars, from Bon Jovi to The Who.

Amorphis and Dimmu Borgir play quite a different music, but the idea of combining two bands in one evening seems to have worked well: over 2,000 fans have gathered to enjoy the show (and two-pint beer cups, of course). The gig was great, just like you would expect from these guys; the light was a special delight. Dimmu Borgir also has used lots and lots of smoke — the amount of liquid CO2 used would drive Greta Thunberg crazy.

Amorphis setlist:
“The Bee”
Heart Of The Giant
“The Four Wise Ones”
“Bad Blood”
“Silver Bride”
“Against Widows”
“Sampo”
“Into Hiding”
“Wrong Direction”
“The Golden Elk”
“Sign From The North Side” (first time since 2015)
“House Of Sleep”
“Black Winter Day”