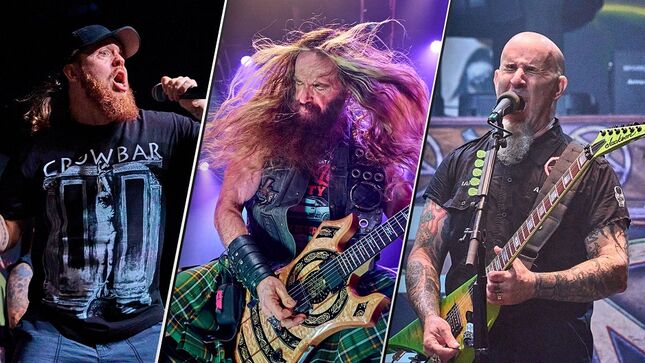 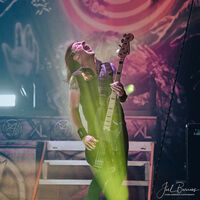 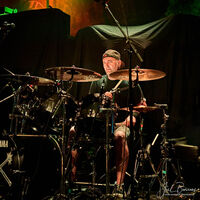 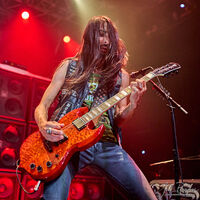 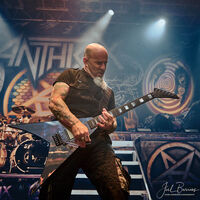 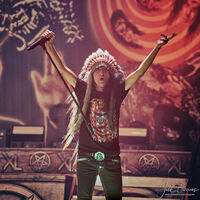 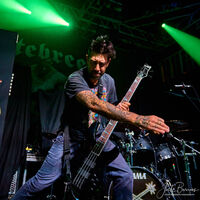 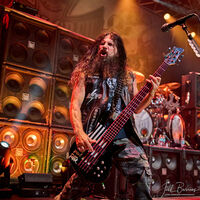 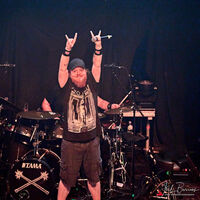 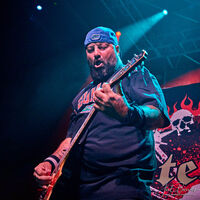 The jury may be out on whether the heavier end of the metallic spectrum can provide relief from the Florida heat, but following a truly raucous showing at the Tabernacle in Atlanta, Georgia; New York thrash icons Anthrax, co-headliners Black Label Society and tour opener Hatebreed would do their best to provide the most aggressive distraction possible to the masses in Orlando. It could be dubbed the understatement of the 2020s thus far to stipulate that this trio of metallic stalwart outfits would prove a formidable crowd draw, as just prior to the first notes ringing out the spectators were crammed shoulder to shoulder like sardines into the famed House Of Blues venue on Friday, August 12. And though moving to the kinetic display that would unfold might well have been virtually impossible, there would be no shortage of horns being thrown, frantic moshpits and enthusiastic bodily gesticulations attempted as one classic song gave way to the next. 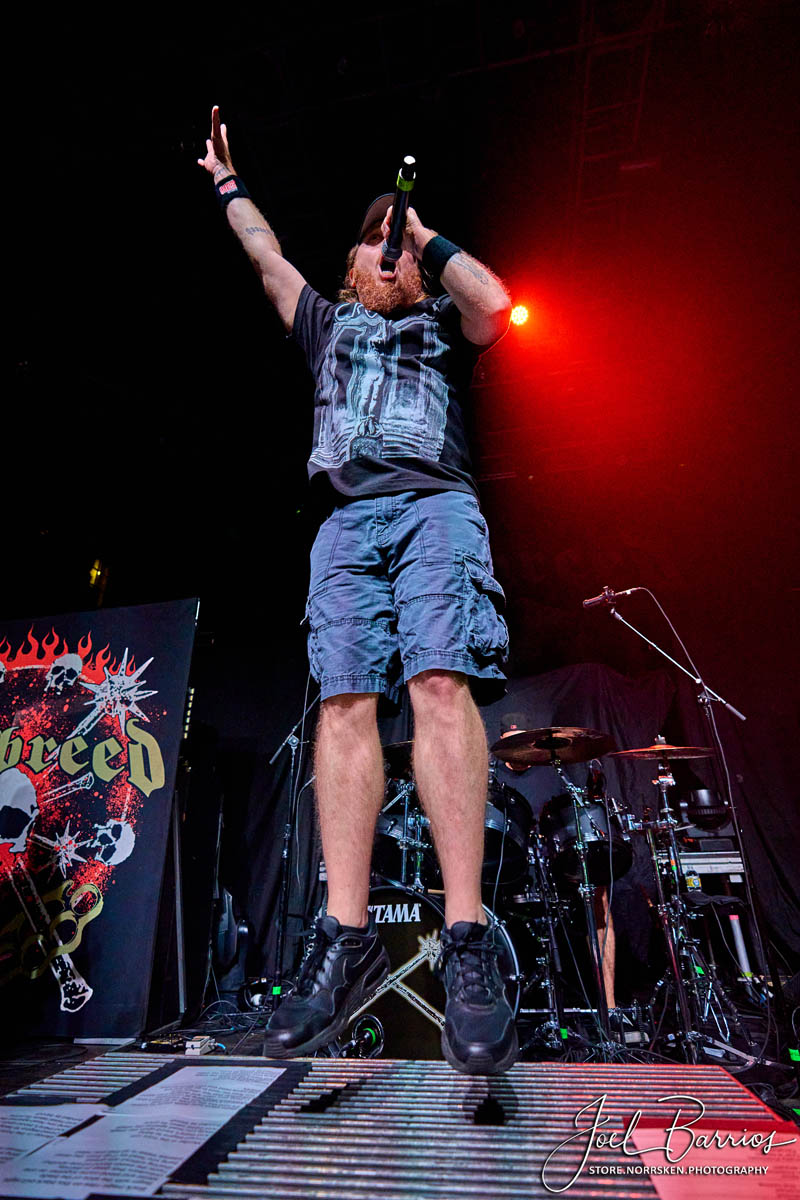 For an opening act and the de facto youngest fold in this colossal lineup, Hatebreed had little problem leaving an impression, literally on the foreheads and vertebrae of every onlooker. Helmsman Jamey Jasta balanced his forceful grunts and shouts with a humble sense of decorum and humor as he recounted both Scott Ian and Zakk Wylde’s names showing up on his caller ID between songs as the precursor to their inclusion on the tour, topping it all off with a hilarious “When you are asked to go on tour with half of Pantera…You can’t fucking say no”. Holding true to this observation, their set would be chock full of pummeling groove metal numbers from their early to mid-2000s heyday that highly resembled the aforementioned ‘90s groove metal icons, with classic and concise selections such as opener “Proven”, “This Is Now” and “Tear It Down” being among the standout performances, though the energy level would hit its notorious apex with a rousing rendition of Exodus classic and thrasher “Bonded By Blood”, which got a sizable mosh pit going despite aforementioned lack of physical space. 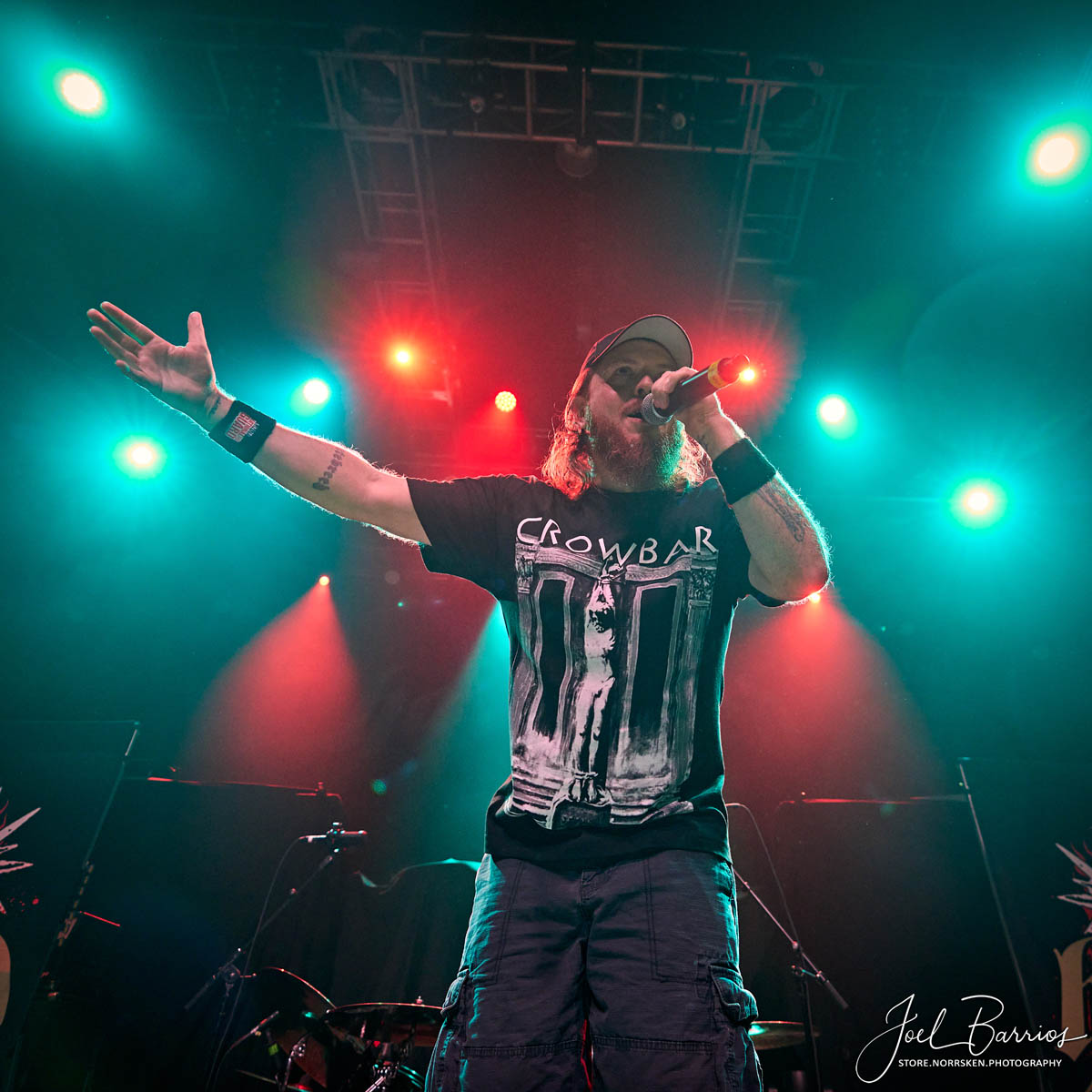 With the huddled masses sufficiently jazzed up, co-headliner and southern doom extraordinaire quartet and co-headliner Black Label Society would dial back the fury a tad, but spare no expense in the energy department. Led by the Ozzy Osbourne-like nasally bellows and wild bluesy guitar shredding of Zakk Wylde, the auditory assault took on a bit more of a rocking character, with a healthy level of Black Sabbath and Down trappings in two. Their latest and 2021 release Doom Crew Inc. would be well represented in their set, with the muddy, mid-paced mystique of “Destroy & Conquer” and the melancholy blend of “Master Of Reality” and “NOLA” trappings with a slightly ballad-like demeanor of “Set You Free” being the standouts. Then again, older offerings like the chug-happy banger and opener “Funeral Bell” and the Zeppelin-like, psychedelic stylings of closer “Stillborn” were even more avidly received. Though no offering out of this leather-clad California export lacked in poignancy, the display of two square backdrops at each side revealing the faces of Dimebag Darrel and Vinnie Paul added levels of both fury and nostalgia throughout their balls-to-the-wall set, especially as the tear-jerking melody of “In This River”, dedicated to the former no less, rang through the air. 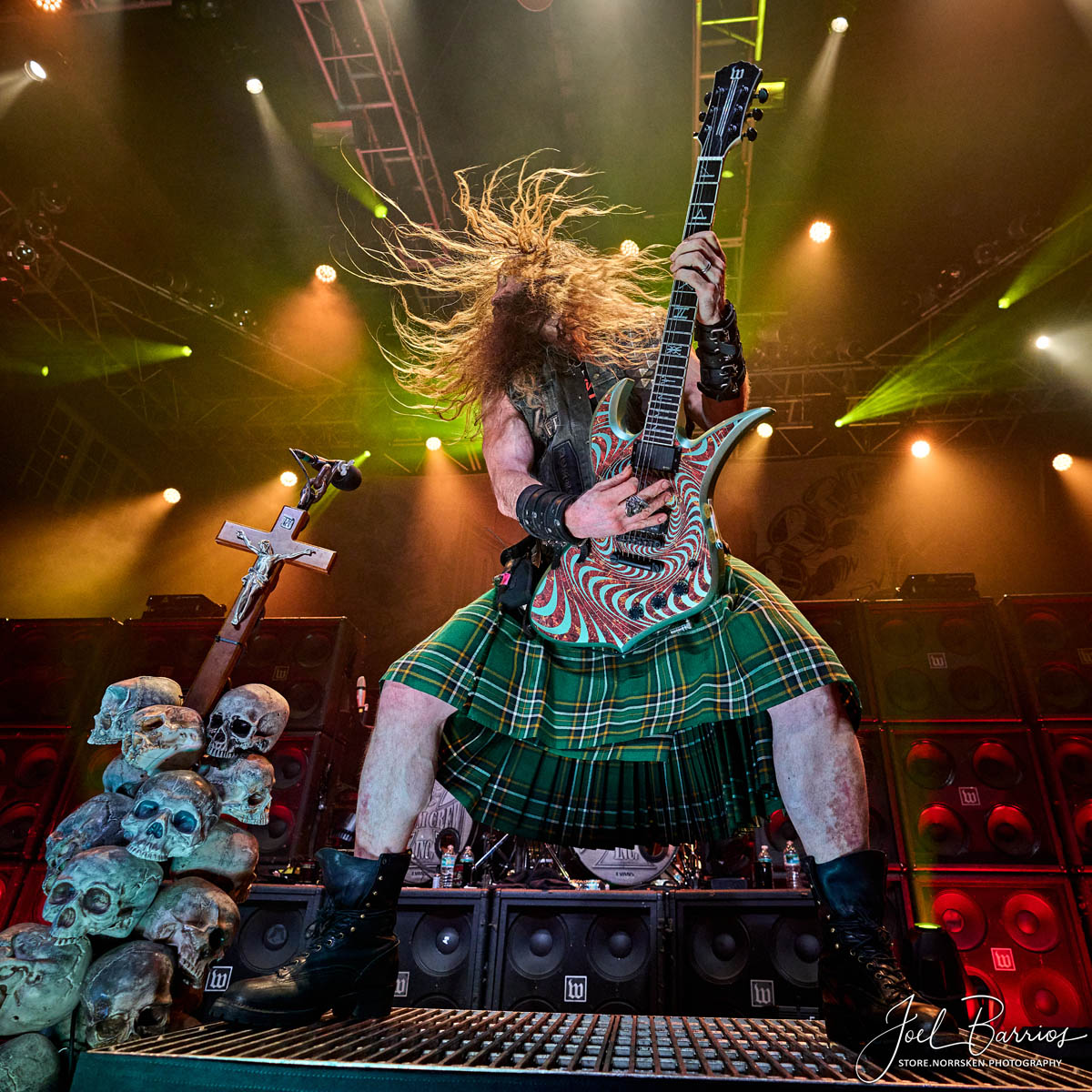 It would seem a fool’s errand for any band to attempt following such stellar performances, but the fool would wisely choose the perfect proxy in Anthrax, a fold that planted their mad thrashing flag on the very concept of bringing down the house. The crowd response was deafening from the moment that the opening chords of “Among The Living” broke the silence after an ensemble of celebrities including Keanu Reeves, Lady Gaga, Brendon Small, Gene Simmons and a handful of others recounted Anthrax’s impact on them via pre-recorded video projected against the white backdrop covering the stage in its entirety, and the ensuing set would see the lion’s share of said 1987 thrash metal album and staple remind all in attendance why this New York outfit stands proud among the Big Four. In addition to pummeling performances of “Caught In A Mosh” and “I Am The Law” finding a sea of horns flying and heads banging, the mid-paced nuance of “Persistence Of Time” jam “Keep It In The Family” and older melodic speeders off the “Spreading The Disease” album like “Madhouse” and “Metal Thrashing Mad” would see legions attempting to imitate Belladonna’s soaring tenor while Scott Ian’s pounding riffs, Frank Bello’s insanely frenetic bass licks and Charlie Benante’s hyper-paced drumming registered on the Richter Scale. 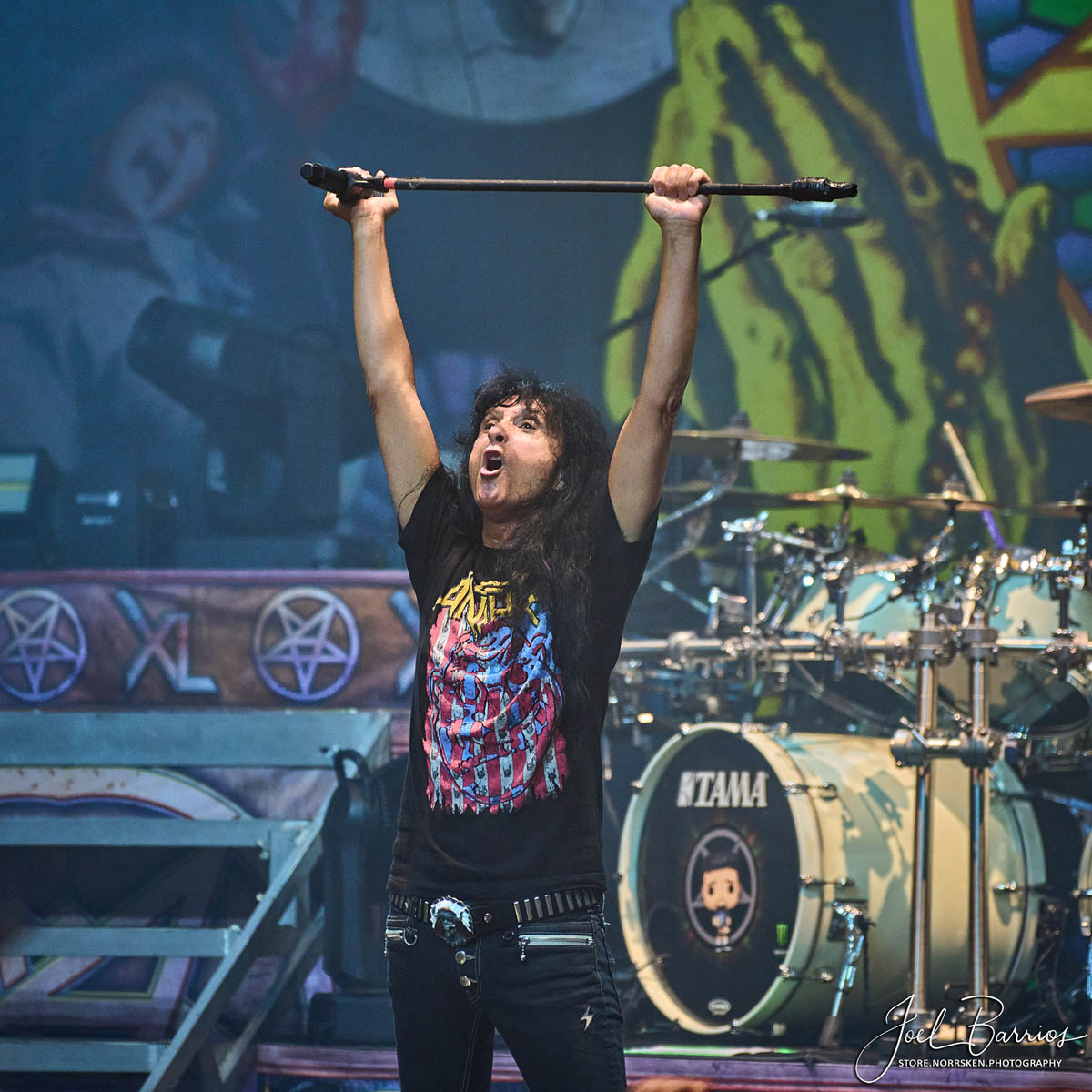 Perhaps the only thing that topped the flawless performance turned in by the wrecking crew from Yonkers was the back and forth with the crowd, which ranged from the comedic to the sentimental. Though Joey Belladonna worked the audience with the best of them and had always been the de facto front man, Scott Ian would do most of the talking, and proved an effective hype-man, whether it was his rousing call to camaraderie prior to a brief reference to their historic collaboration with Public Enemy’s “Bring The Noise”, or his reverent dedication to Dimebag Darrel, Ronnie James Dio, Lemmy Kilmister and several other fallen heroes of the music scene leading up to their 2011 offering “In The End”. Then again, it all came to a head just prior to the closing banger and ode to the first Americans “Indians” where Belladonna donned a feathered headdress, this time around thrown his way by a fan from the upper balcony – a gesture that both surprised and got the frontman even a tad emotional – and likely added an extra adrenaline rush to their final, mega-thrashing hurrah. It was the picture-perfect final explosion to a night of unadulterated metal, one that was nothing other than an incessant succession of cataclysmic volcanic eruptions translated to music. 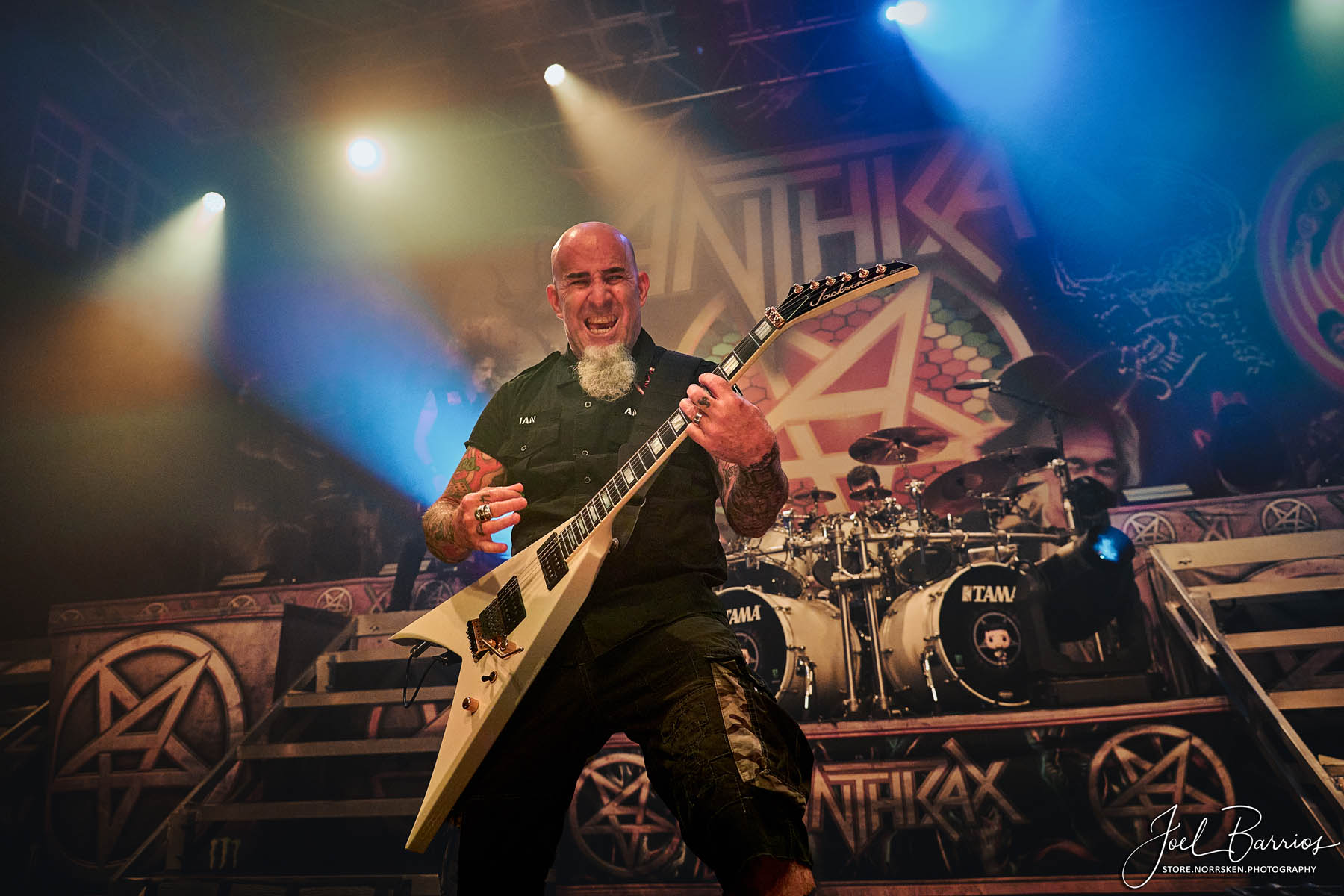