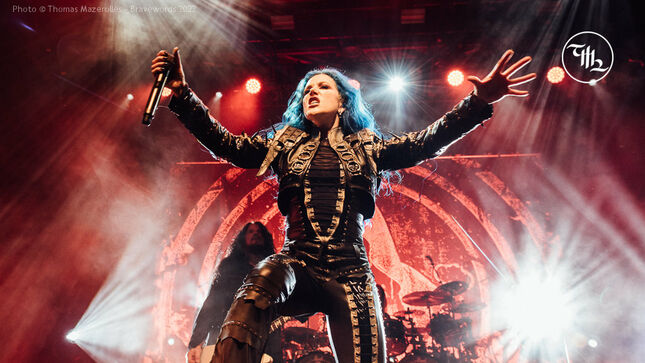 The Montréal metal fans had a good reason to gather in masses at the MTelus as the co-headlining North American Siege consisting of Arch Enemy and Behemoth were finally in town. In addition to these two great bands, Napalm Death and Unto Others were also part of the tour.

The night started with the band Unto Others, known as Idle Hands until two years ago. Surprisingly, even with an early starting time of 18h30, the place is pretty full when the band gets on stage. The first thing we notice is their production that includes many giant crosses on stage. As cool as that look, it really limiting their available space on stage. As usual, Gabriel Franco wears sunglasses during the whole show and looks like Joey Ramone, but that being said, his deep vocals are very good. Their mix of goth and traditional metal is very doomy and it does not get the crowd going. At one point Gabriel asked if the fans remembered seeing them opening for King Diamond a few years back, but only a few answered his call. The main attraction is obviously Sebastian Silva, their lead guitar player. He might not have been born to experience the 80’s music scene, but he is definitely living it with his long puffy hair and his clothes. He also has the attitude and the hands to back up his looks and one could think of him as a young Yngwie. His only issue was that he had so little space to move on stage that he looked like a dog running around in a cage, trying to find a way out. The band played mainly songs from last year’s release called Strength. I must admit that these newer songs are more focused on the rhythm guitar than on the melodies and that is simply not showcasing Sebastian’s skills. But even if the band had a great short set, the fans were simply not buying what they were selling.

Napalm Death was up next and Barney had tons of room on stage to play with. Going straight to the point, with a few songs right off the bat, the band was firing on all cylinders. Barney explained to the fans that they were Napalm Death, from Birmingham, England and that they made noise. This classic introduction never gets old and is self-explanatory at the same time. Fans in the back started moshing as soon as the music started and most of the people up front were wondering what the hell was happening. I even think that some of them looked more at the pit than at the stage during their set. The fans of the band even did a wall of death during “Invigorating Clutch”. Barney is a continuous hurricane on stage, but he never misses a beat and is very talkative as well. Their set was mainly composed of songs from Throes of Joy in the Jaws of Defeatism, their last album, but they also included all their biggest hits. As usual, the pushing and shoving was at its maximum during the song “Scum”. Things finished with the succession of their cover of Dead Kennedys’ “Nazi Punks Fuck Off” and “Siege Of Power”. Napalm Death never disappoints and left the stage as fast as they came on while many fans were still puzzled about what just happened!

As expected, Behemoth was up next and fans could barely contain themselves as the stage was getting ready. Starting with the majestic “Ora Pro Nobis Lucifer” the crowd went wild instantly. Of course, the dark visual side of their show is very striking, but their mix of death and black metal is always precise and the fact that we can always distinguish every instrument during their show is truly impressive. Headbanging is happening everywhere even the fans in the balcony are doing their mandatory exercises. Nergal is obviously the focal point on stage and commands his disciple with an iron fist. As usual, Inferno is surgically precise and powerful like a war machine on drums. The band played their new song called “Ov My Herculean Exile” and to no one’s surprise, fans were singing along like this was an old song. The energy was at its peak during classics like “Ov Fire And The Void”, “Christians To The Lions”, “Chant For Eschaton 2000” and the set closer “O Father O Satan O Sun!”.  Behemoth is one of those bands that hits you like a ton of bricks each and every time, but we simply can’t get enough.

Being in the hometown Of Alissa White-Gluz, it is only fitting that Arch Enemy are the last ones to perform. The festivities started with “Deceiver, Deceiver”, a song from their forthcoming album that will be released later this summer. As usual, lights as always very bring and you can see how excited the band members are to be playing in front of fans pushing each other with passion. Things got crazier in the pit when the band followed with fan favourites “The World Is Yours”, “Ravenous”, “War Eternal” and “My Apocalypse”. They could not be any happier with all those huge hits being played in successions. As usual Michael Amott and Jeff Loomis are very dynamic on stage and they complete each other so well on guitars. Alissa is always hyped up to play in her hometown, but we can see that she’s battling something because her voice is buried deeper in the music in comparison to past concerts. Sure enough, she confirms this in between songs, but there was no way the band was cancelling or postponing tonight’s performance. She also took time to tell the fans (in French so Sharlee D'Angelo could not understand) that it was his birthday the next day, so she asked the crowd to sing him happy birthday. “House Of Mirrors” was the second track for their upcoming album and we could see that Alissa was struggling more and more with her voice as the show continued. I guess that is the reason why their third new song (“As The Pages Burn”) was not played later in the set and why the band did not play “Fields Of Desolation” and let the show finish with the instrumental playback of that song instead.

Four bands, four different genres, there was something for everyone and fans loved every second of it, even if Arch Enemy’s set was cut short.