AT THE GATES Slaughters Montreal! 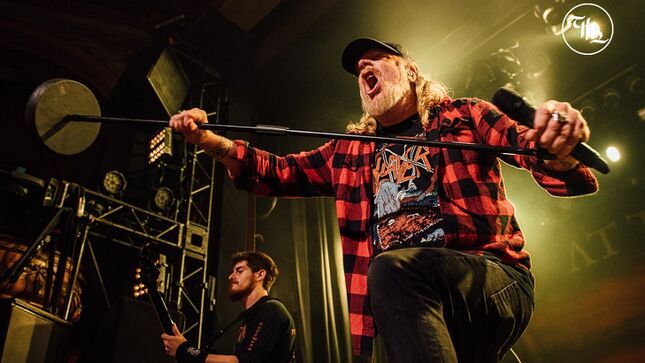 To the great pleasure of fans, At The Gates announced a North American tour where they would play the iconic Slaughter Of The Soul album in its entirety. I don’t know for the rest of you, but this was enough to get me excited. I did not need to know who else was on the tour, but for those who are interested, Municipal Waste and Enforced accompanied them on the tour.

Surprisingly, the Corona Theater in Montreal was not that full when Enforced got on stage. The first thing we notice is that signer Knox Colby had a sling holding his right arm. This was the result of him enjoying himself a bit too much during the show of Municipal Waste in Toronto where he stage dived and hurt himself. Even if this injury hindered his movements, it did not stop him from giving an energetic performance. He even removed his sling halfway though the set and kept on going like nothing was wrong. The fans required a few songs to figure them out and then started pushing and shoving each other like we all do during a thrash show. Guitarists Will Wagstaff and Zack Monahan did a great job on guitars, but I had to say that it was their drummer Alex Bishop that stole the show with his energetic performance!

It was now time to see Municipal Waste get this party going and as soon as the first notes of the song "Breathe Grease" were played, fans pushed each other like
there was no tomorrow. As expected, their set was focused on their most recent album (Electrified Brain) with five songs. The band also played their classic hits like "Beer Pressure", "Sadistic Magician", "Headbanger Face Rip" and "Born To Party". Knox did not have a great voice, it was shot pretty bad, but that did not stop him from doing his set and giving his all in each and every song. Before the song "Wave Of Death", he asked the crowd to stop thrashing and to start crowd surfing, that gave a good workout to the security crew in the pit! As we all know, a Municipal Waste show is a real party and this one was no exception! I can’t wait to see them again!

It was now time for the Swedes to celebrate the 25th anniversary of the Slaughter Of The Soul album. Yes, Covid-19 delayed this North American tour for two years! Contrary to many other bands, At The Gates started their set by playing songs that were not from that album, so fans were blessed with "Spectre Of Extinction", "At War With Reality", "To Drink From The Night Itself", "The Swarm" and "Death And The Labyrinth".

By this time, the crowd was already going crazy and it was now the time for the band to play the entirety of Slaughter of the Soul, in the same order as on the record.  As in the past, the band does not take many breaks in between songs and let’s the music do the talking. One of the rare breaks was when Tomas Lindberg explained that this tour was only possible because David Martinez from Atheist filled in to replace Jonas Stålhammar who was let go by the band. The title track of the celebrated album was anticipated by many and the crowd answered the call of Tomas as they sang with him very loudly. Their set ended with the song "The Night Eternal".

With quality music like this, the night when by very quickly and fans only wished it could last longer!