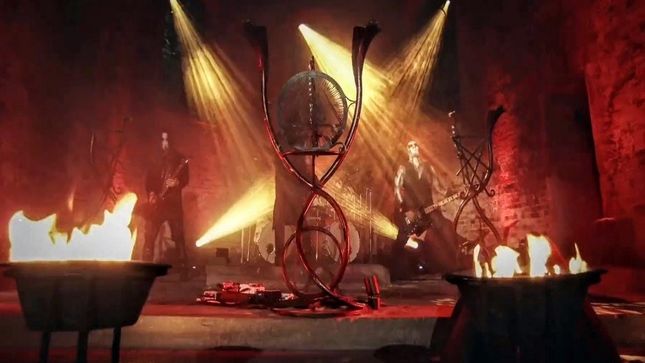 "It's been more than six months now without access to live concerts, apart from the odd livestream. As time went by, more bands joined the fray. Many seeking to offset lost income by charging for the pleasure of seeing their faces. Have yet to pay for that privilege, but thanks to the Internet, some of those same shows appear online, a day or two after the fact. That said, taking a look at the Polish black metallers' mystery shrouded, nearly two hour extravaganza, looks like money well spent. True, it's not a pure "live" event, as there was plenty of pre-recorded/post-production effects interspersed between the onstage footage (like a mini-movie), but the experience (that will hopefully be available for all to see, at some point) made up for that fact. I know the Church has sought to make an example of Nergal, personally and professionally, for a while now, but here was his revenge. Housed in an abandoned sanctuary (the same one used for the "Blow Your Trumpets Gabriel” promotional clip), this was a multi-sensory experiment on this side of the digital divide, too.

The show opens with a black & white segment: the four horsemen of the apocalypse, literally on horseback. All wear replicas of the death mask that Nergal sports at the start of each show, brandishing flags as they gallop across the countryside. The leader is on a white steed, the rest, black beauties. They dismount at the aforementioned church (its tower billowing smoke), crossing the doorway engulfed/guarded by flames. Playing where the altar should be located, the trio of once stained-glassed portals, overhead, allow colored concert lighting to shine through. There are fiery cauldrons at the front of the stage and a crane (indoor drone?) swoops in for close-ups and overhead shots of the domed, dilapidated brick structure. Throughout "Evoe" opener, in homage to the current state of affairs, Inferno is perched atop his drums, with an elaborate, vertebra encrusted mask (for just the first song). Accessorizes nicely with the belt of small bones, around his girth. During the purple lit "Wolves Ov Siberia" follow-up, he stands up and makes the throat slashing motion, with his drum sticks. At the start of each song, its title is flashed onscreen. When zooming in, the camera can change speeds, moving faster, then stopping abruptly on its subject. Rare chance to hear some older tracks too, including "From The Pagan Vastlands". 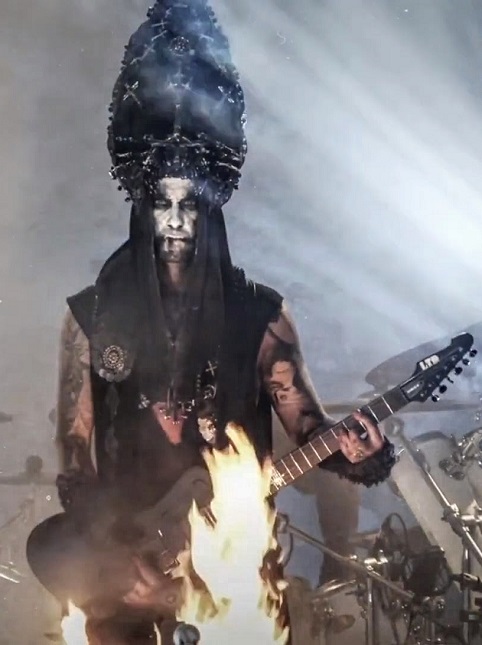 Act II opens with our death masked host swirling the thurible. "Blow Your Trumpets Gabriel" is bathed in strikingly contrasting reds and yellows. Nergal takes a trip off the stage and sticks his face into the camera, extreme-close-up. Scenes of the band are intercut with a demo from twin sparkling baton twirler. There's fire cannons lobbing plumes overhead. Later, a blind-folded, female trapeze artist, swings in the rafters, also toiling amongst the flames. Following the voiceover heard on record, there's a middle finger into the lens, to begin "Antichristian Phenomenon", which sees a small, planned conflagration ignite, at the base of Inferno's kit. One of my personal faves, "Conquer All" sits between material from The Satanist. Hulking bassist Orion gets into the ornate headdress game, with an oversize, feathery construct, for atmospheric "Lucifer", a song augmented by smoke-filled stage, roaring fire cauldrons and like-minded incendiary performance. Nergal takes an off-stage stroll around the old church's interior.

What's a Behemoth show (especially in Poland) without controversy? No biblical issues, but a semi-nude, white painted woman (black crucifix from forehead to chin, across the eyes) is suspended from surgical steel meat hooks, impaled through her back and forearm, during “Ora Pro Nobis Lucifer”. In the foreground, she floats to & fro, highlighted in white lights (for once), as the band blazes away, beneath her. Seen this sort of magic trick/performance art before, but Behemoth ratchet it up a notch, trails of blood flowing from the points of impalement. Neat affect, superimposing religious icons, like angles, on the outside walls/steeple of the old house of worship. Hijinks complete, it's full steam ahead, a POWERFUL rock show, for the last hour. There's more flames onstage and off (balancing a lit metallic cube), appropriate for the staccato "Ov Fire And The Void".

Echoes of a long dead era of European dictators, from a balcony draped in red/black banners embossed with the band's triple inverted crucifix logo, Nergal delivers a blistering, native tongue diatribe, via a megaphone: "Chwała Mordercom Wojciecha". Splotches of red now smear his corpsepaint, his face surrounded by flower pedal headdress. There's a headlight shooting from the megaphone, not sure what's focused more brightly, the searchlight beacon, or his pointed words. His band stands (drummer included) silently, awaiting the guitarist/frontman's eventual return to the stage. Shower of confetti and more fiery plumes (always a good mix!), like the conductor of Hades' orchestra, Nergal waves a pair of fire engulf sticks, directing the symphony of the damned. Whizzing by, "Slaves Shall Serve" sees a blitzkrieg of white/yellow lightning pulsate through the open windows, onto a red lit stage. Concluding close-up shows Nergal with another one-finger salute. Each offers their best Gene Simmons blood spewing to kick off "Chant For Eschaton 2000": Nergal tongue coated and Orion's face/chest splattered, by his own hand. 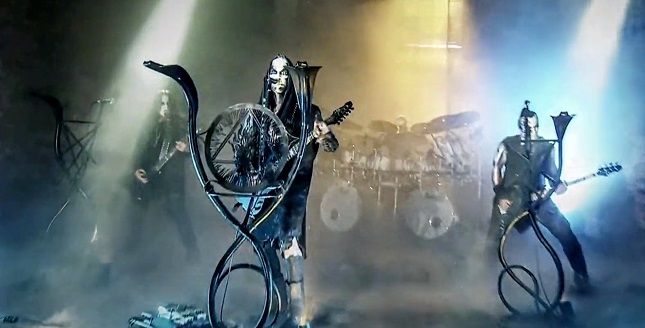 Last Act begins with a bit or archery. Orion launching a lit arrow, to ignite parallel insignia, built from sticks. Don't worry, this was outside the church, at night. Cut back to the stage, where, by cinematic magick, the burning triple crucifixes are now behind the band, as they play "Sculpting The Throne Ov Seth". There's something about authentic burning stage props, not CGI or controlled propane fire pits. Inferno resurrects the aforementioned mask as he pounds the toms with a pair of femurs (leg bones) to start "Bartzabel", as Nergal walks out with his stylistic miter headgear. The image is so clear and crisp it looks like a video. For purple hued "Decade Of Therion", after he shouts "We kill angels with silence," Nergal looks right into the camera, and puts his finger to his lips (shhhh!). As on the last couple of tour runs, whether opening or headlining, "O Father O Satan O Sun!" ends the set, but here, there are flames on the roof of the church and big enough bursts of flames to be visible (from the outside) through the paneless windows. Who needs corpsepaint? Nergal looks like he dunked his head in the overflow of the local abattoir. More side-by-side, inverted burning crosses, in the sanctuary and in the field, along with another horseman, back afire.

Lest you had any doubt, Adam "Nergal" Darski is a visionary. While his insight/foresight might not be for everyone, it's intriguing and thought provoking. Never change!