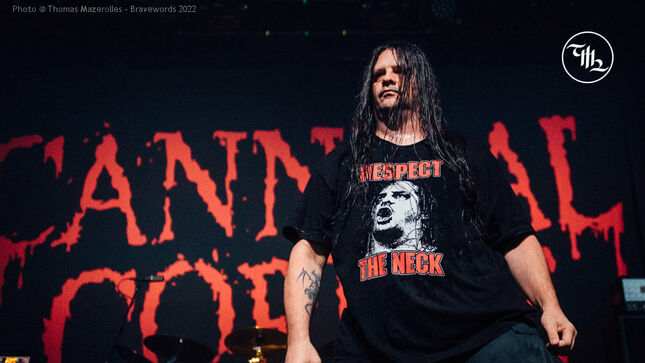 Fans of brutal music had a good reason to gather in masses at the MTelus on November 5 as Cannibal Corpse was in town. In addition, fans would also see Dark Funeral, Immolation and Black Anvil.

Being a sold-out event, it was not a surprise that fans were either waiting to get in the venue or were waiting to buy merchandise when Black Anvil started their short set. With a new album freshly available, it is only normal that the band played many songs from it. Fans that finished their purchases were enjoying their mix of black and thrash metal. Being the first band on stage also meant that they did not have much room to play with, but that did not matter and concentrated on giving an intense performance.

After a short changeover, it was now time for Immolation to offer the fans a good dose of death metal. They also had a new album out so it was no surprise that the band played many songs from it. "An Act Of God", "Noose Of Thorns", "Overtures Of The Wicked" and "The Age Of No Light" were well distributed around older classics like "Swarm Of Terror", "When The Jackals Come" and "What They Bring". The low growls of Ross Dolan are very powerful and went well with the intensity of their music. Robert Vigna is also very dynamic on stage and he seemed very happy to be back in Montreal playing in front of a packed venue. It was a shame that their sound was muddy because it was difficult to distinguish every instrument from time to time.

By now, fans were ready for Dark Funeral and were waiting for them to get on stage. Things got underway with the song ‘Unchain My Soul’ and the crowd went nuts, but Heljarmadr’s microphone stopped working in the middle of the song and he had to switch to his backup. This took a little time, but the band continued the song during this mishap like nothing happened. They followed with fan favourites "Hail Murder", "My Funeral" and "The Secrets Of The Black Arts" and they again experienced issues with the level of their sound, but that did not last very long. Even if the band released a new album earlier this year, they chose to only play three songs from it, "Let The Devil In", "Leviathan" and the more melodic "When I’m Gone". The musicians were very intense, but they pretty much stayed in their spot for most of the set. The last part of their show was packed with hits like "Open The Gates", "Nail Them To The Cross" and "Where Shadows Forever Reign". Fans were either singing loudly with Heljarmadr’s or pushing each other vigorously to the rhythm of the music. For many young fans, it was probably their first time seeing Dark Funeral in concert and they were already looking forward to the next time they will see them again in Montreal and hopefully as headliners.

It was now time to bring out the heavy hitters of this tour, Cannibal Corpse, and the Montreal fans were more than ready for them. As soon as the band kicked things off with "Scourge Of Iron", they did the same in the pit. We could immediately hear the difference with the sound quality of Cannibal Corpse compared to the one of the previous bands. Less powerful and more precise, this was certainly a plus so we could distinguish the great work of guitarists Rob Barrett and Erik Rutan. With a song selection that touched almost every album in their discography, fans knew what to expect from the band and that was pure intensity. That was reflected in the crowd as the mosh pit was totally insane and brutal. Once again George ‘Corpsegrinder’ did not request a wall of death, I do not know if this element was removed from their show permanently or not, but I have not seen one in their last few shows in Montreal. As usual, the musicians are pretty static on stage and George keeps the crowd interaction to a minimum. He will dare fans to try and keep up with his headbanging during "I Cum Blood" and say that they will fail miserably.  He also plays with the fans towards the end of the show by asking if they are tired and want to go home or if they want more songs. Fans were pleased to hear all the classics like "The Wretched Spawn", "A Skull Full Of Maggots", "Evisceration Plague", "Stripped, Raped And Strangled" and obviously "Hammer Smashed Face" to end the night. As usual, Cannibal Corpse left only destruction in its wake and huge smiles on the fan’s faces.