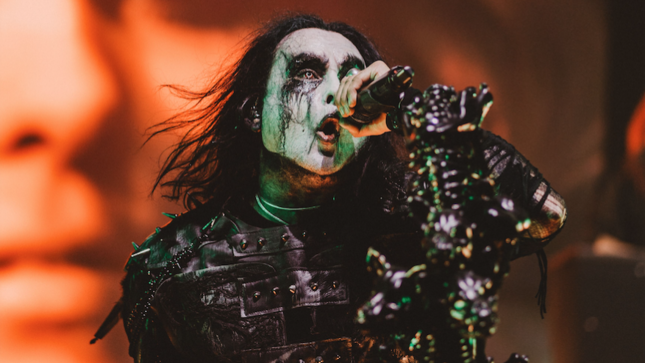 On May 12, 2021, Cradle Of Filth performed their first concert since November 2, 2019 in the form of a livestream pay-per-view event. It also heralded the debut of new keyboardist Anabelle Iratni, who replaced Lindsay Schoolcraft. Anabelle is no stranger to frontman Dani Filth as she twinkles the ivories in his side project, Devilment. The 90-minute setlist showcased Anabelle’s lush vocal talents as she sings alongside Dani’s shrieks and growls. The stage featured several risers, as well as a large video screen upon which clips of Hammer Horror movies were continuously shown. Flames erupted along the front and sides of the stage, and at one point it even snowed!

“Your applause is to be commended,” jokes Dani to the empty room, proving his sense of humor certainly hasn’t dampened. Given the lack of audience due to the pandemic, although the band was extremely tight, at times it felt like you were watching a complete dress rehearsal prior to the tour starting. Those hoping to hear a new song from the forthcoming album, Existence Is Futile, did not get their wish, but instead were treated to a career-spanning selection including songs from The Principle Of Evil Made Flesh and Dusk And Her Embrace, all the way up to Hammer Of The Witches and Cryptoriana.

The pay-per-view will remain online until May 26 at Cradleoffilth.veeps.com.