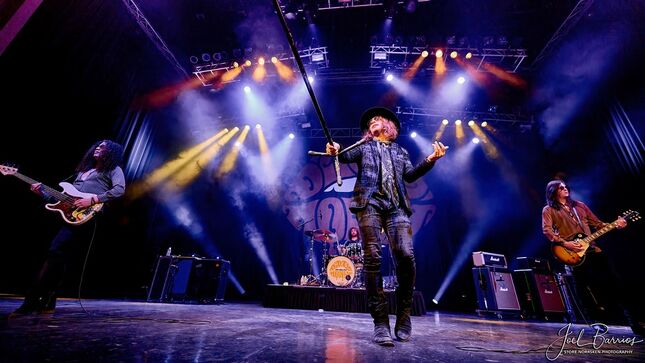 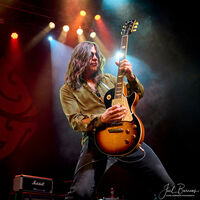 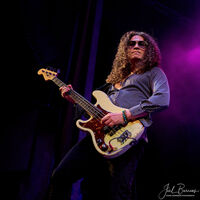 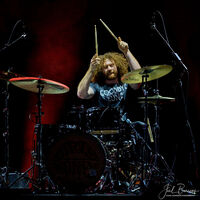 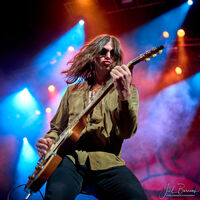 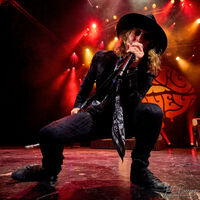 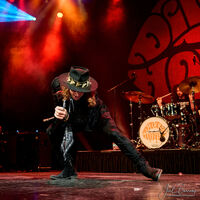 It’s not every day that I find myself at loss for words when trying to chronicle a live performance. But don’t get me wrong, this is not an occurrence of a writer’s block. It’s merely that I am finding myself at odds when it comes to describe what a Dirty Honey show looks like, as I’ve done that in the past several times – to the best of my abilities – and every single word I wrote in those occasions remain true today, and then some.

The first time I saw the band playing was back in October of 2019; and while documenting the show the day after, I wrote: “…Dirty Honey are NOT another run of the mill hard rock revival band, and they are NOT in a futile mission to save rock 'n’ roll. They simply kick ass and they are a band to follow closely: these kids are destined to the big leagues…” Well, those words sort of sound prophetic nowadays, as the quartet continues their meteoric rise to rock 'n’ roll stardom. And before you think I’m sounding like a common a fanboy, let me clarify: I’m not. 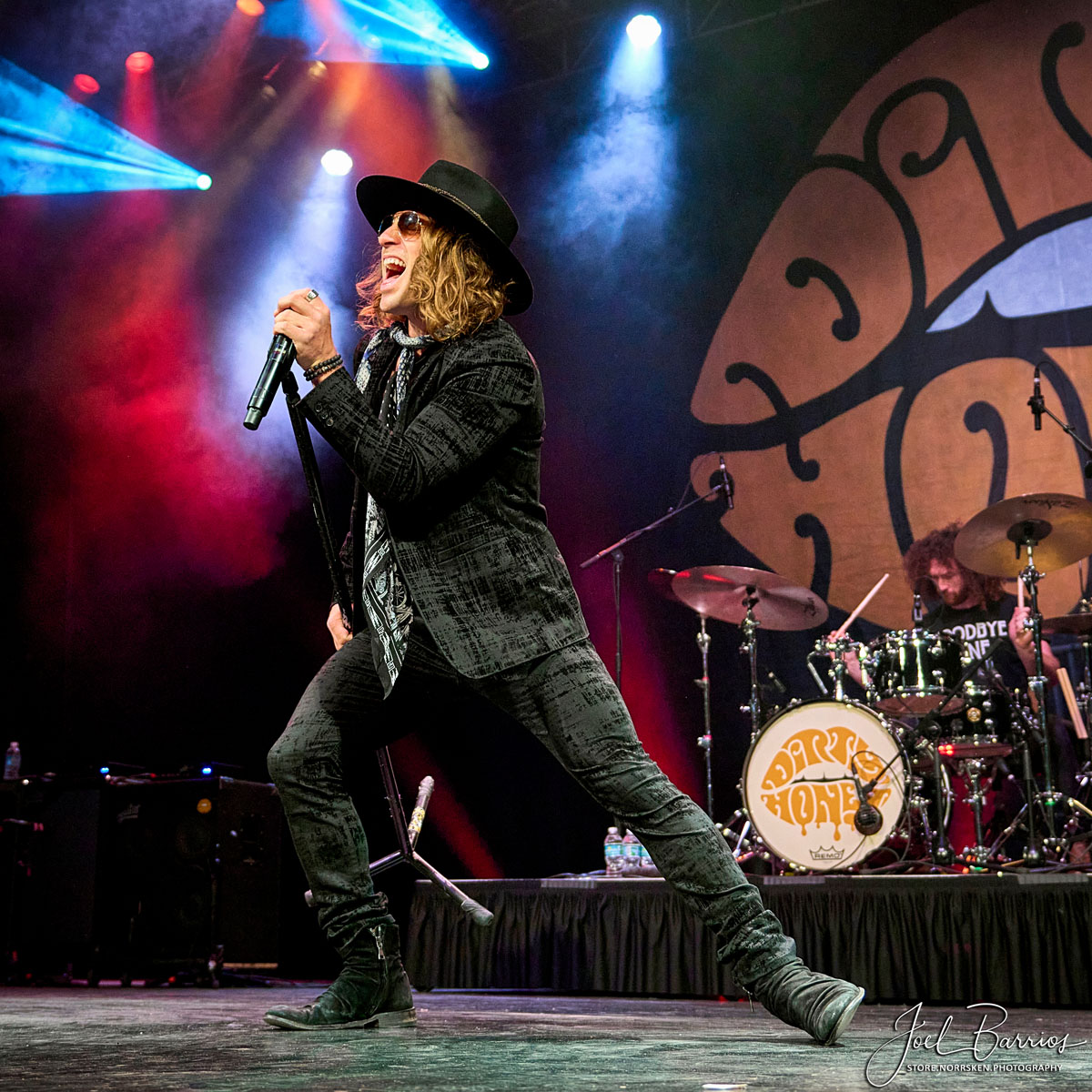 I consider myself a devotee of well-composed and performed music, being hard rock, metal, fusion, the genre doesn’t really matter, as my personal music collection can attest. And to my delight – and the enjoyment of the somewhat modest audience that gathered at Hard Rock Live Orlando this past Sunday, that’s exactly what Dirty Honey serves up – time and time again: no-frills, balls-to-the-wall, no-holds barred hard-rock, overflowing with swagger and gusto, robust and soulful vocals, fluid guitar solos and a roaring bass and drums rhythm section, all of that exquisitely decked with a broad level of confidence and musical proficiency, a combination that certainly reminds me of the heyday of some others consummate of old-school rockers. 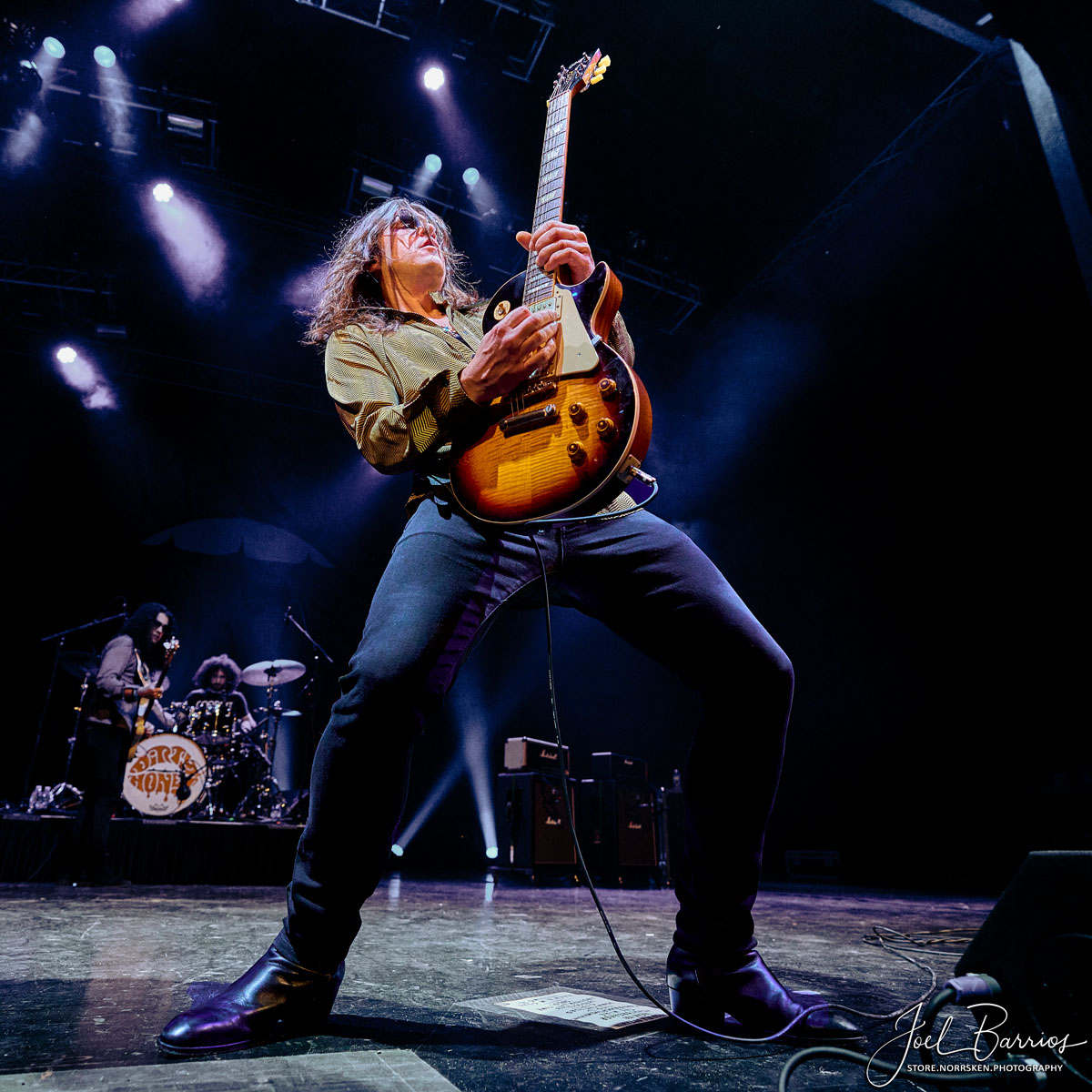 The presentation was part of the Young Guns tour, which was first re-scheduled due to the uncertainties of the pandemic, and later suffered from the absence of Wolfgang Van Halen’s band Mammoth WVH who were co-headlining the trek, as some Covid-19 cases in their tour camp forced them to cancel their appearance for the last six shows. Dirty Honey pressed on, and despite the affluence of concertgoers on Sunday night didn’t present them with a full house, the four young musicians played with the same energy and enthusiasm as if they were the top act in an arena bill. If you like bands like Aerosmith, Led Zeppelin, AC/DC, The Black Crowes (for which they recently open), or even Greta Van Fleet and you are unfamiliar with Dirty Honey, well you need to correct that omission as soon as possible. But even if none of the aforementioned bands are in your wheelhouse, I encourage you to give Dirty Honey a chance, as they ARE NOT a band that mimics the sound of the genre greats, but take elements of that music’s DNA to weave together their own authentic and kick-ass compositions. They can’t be the only unsigned band in history to land a # 1 Billboard Mainstream Rock Airplay chart position out of pure luck, don’t you think? 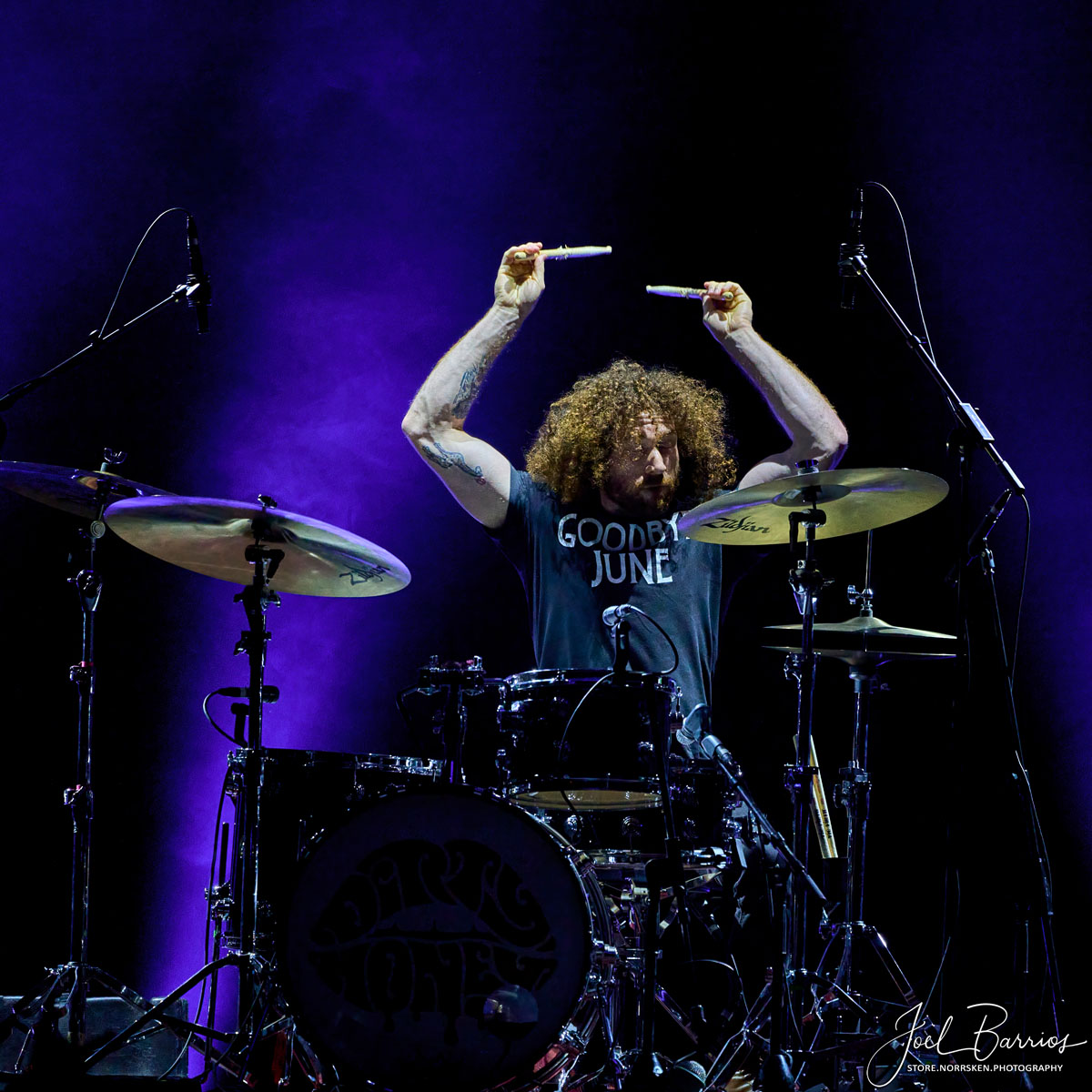 The song selection was very well balanced, starting with their latest smashing hit “California Dreaming,” passing by “Break You” – with the pertaining final wailing from Marc LaBelle that sent shivers down my spine and reminded me of the great Chris Cornell once again – and also featuring staple tracks from their repertoire like “The Wire,” “Scars” and “Gypsy.” Adding an extra level of coolness, LaBelle addressed the audience and confirmed the presence of friends and family among the crowd, expressing how much they like to play in Florida due to that fact, and introducing John Notto’s father while saying his mother was also in attendance. Not afraid of putting their personal touch in what many could consider an oddball choice, we were given a blues-infused performance of Prince’s “Let’s Go Crazy” which besides getting an absolute unanimous reaction also proved these youngsters are equal parts foot-stomping rockers as their roots are entrenched in the blues rock history. Towards the end of the night each instrumentalist engaged in a brief spotlight segment, accentuated by Notto brief addition of the initial portion of Zeppelin’s “Ten Years Gone” to his guitar solo, just before they jumped into a tasteful and ripping rendition of AC/DC’s “Shoot to Thrill” that drove the cheering crowd even wilder. The double punch of “When I’m Gone,” and the sempiternal “Rolling 7’s” – accompanied by a collective singalong – closed the proceedings, leaving me once again with the sensation that Father Time had tricked me and they haven’t actually played a 16-songs long set-list. A deafening ovation resounded for several minutes as they came forward and wave goodbye. 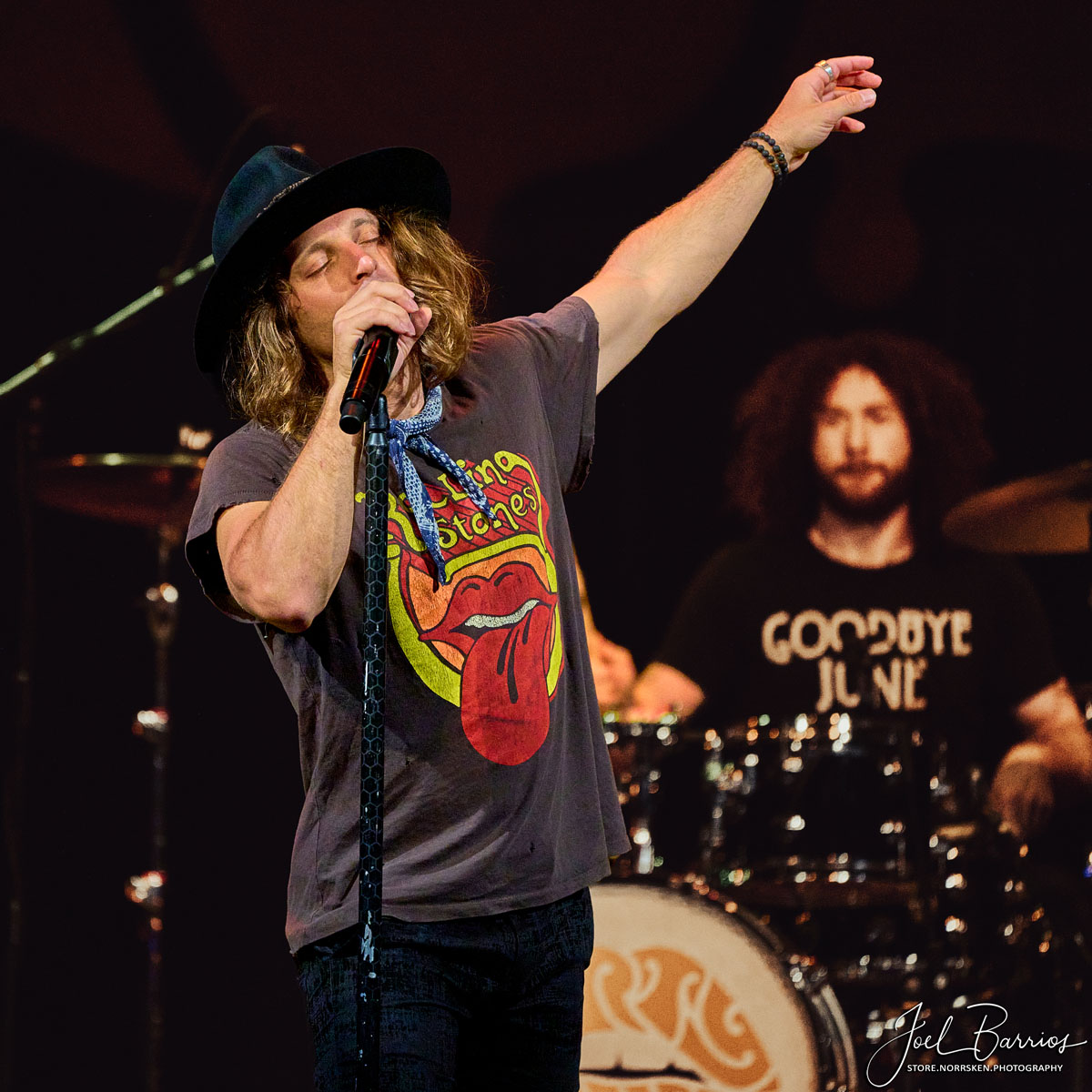 And here I am, once again doing my best to summarize the night’s spectacle and do justice to what I saw. Therefore, let’s try something different this time around: I’m sure you’ve heard the old and worn-out assertion that rock 'n’ roll is dead, haven’t you? Well, if you want to call that bullshit, Dirty Honey is your best ace. Oozing ‘70s and ‘80s rock charisma dressed with a modern twist, radiating talent, personality, and enough chops to make seasoned players pale, these four guys might as well be the biggest band in the planet's hard rock scene in a matter of years. Mark my words.