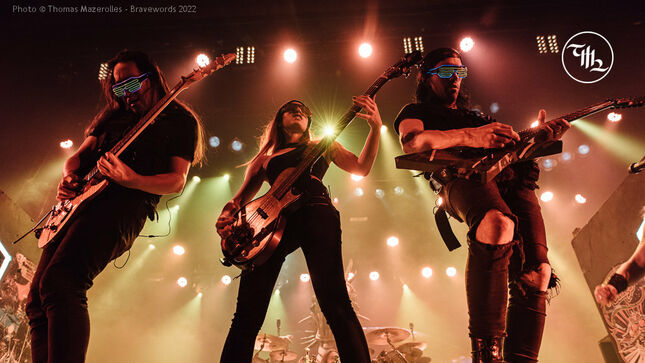 Over the years DragonForce became one of the frontrunners in the power metal genre and North American tour, they were accompanied by Firewind, Visions Of Atlantis and Seven Spires at the Corona Theatre in Montreal.

Surprisingly, the Corona Theater is pretty packed when Seven Spires came on stage for their first concert in Montreal. The instrumental “Wanderer’s Payer” served as an introduction for the song "Gods Of Debauchery" where Adrienne Cowan displayed her growling voice. The fans really liked this style of music that is reminiscent to the music of bands like Once Human and Arch Enemy. On “Oceans Of Time”, Adrienne switched to her clean voice and it was like this was a completely different band playing a more melodic style of music. They even venture deeper in this style with the song “Lightbringer” and Herbie Langhans of Firewind joined them on stage to sing with Adrienne. Fans were headbanging throughout their set and pumping their fists during the songs "Unmapped Darkness" and “Drowners Of World”. Fans loved every second and the musicians were all smiles on stage. I have to say that the more brutal songs had a better crowd reception than the melodic ones. Nonetheless, this was a great way to start the evening.

After a few minutes, Visions Of Atlantis was already on stage with their pirate look to go along with the theme of their upcoming album of the same name. Clementine Delauney hypnotized everyone immediately with her godlike voice on the song “Master The Hurricane”. Her chemistry with Michele Guaitoli (male singer) is spectacular and they both can tell stories like no others. Being French,
Clementine interacted with the crowd in French most of the time. Since they did not have a lot of stage time, they kept the ball rolling as fast as they could and displayed tons of energy. The band easily got the crowd jumping on the song “Melancholy Angel” but kept the best for last with the intricate song "Legions Of The Seas“. Fans can only hope that Visions Of Atlantis will come back in the near future as their only other time in Montreal was back in 2007.

Talking about a band not playing in Montreal very often, Firewind’s last concert here was in 2013 so it was not a surprised that fans were anxious to see them again. It is with Herbie Langhans, their new signer that the bands kick things off with “Welcome To The Empire”, a song from their most recent album. Fans surprisingly started pushing each other furiously as soon as the band started their set and that never stopped. Gus G is such a master of his instrument that he is simply mesmerizing to watch. He even used a guitar that was rigged with red lights and smoke, a la Ace Frehley, during “The Fire And The Fury”. The musicians were very dynamic and were having as much fun on stage as the crowd in the pit. The heavy riffs of “Set The World On Fire” and “Rising Fire” were other highlights of their set. One would have thought that the band would have concentrated their set list on their most recent album, but they chose to only pick two songs from it and play songs from almost all of their back catalogue instead. The band closed their set with their awesome cover of “Maniac”. As expected, everyone was signing along and pushing each other to the rhythm of the song. Talk about ending things on a high note!

It was now time to get down to business with the main act that everyone was here to see. So far, bands seem to have a tendency to cut down on their productions since touring has resumed, but DragonForce always goes across the grain and this tour is no different. The band has giant arcade machines that serves as platforms on each side of the stage, a huge dragon in the background that could be from Dio’s Sacred Heart tour. But that is not all, they also have confetti cannons, pyro and even a smoke gun. This is their biggest production to date and something that we do not see in theaters usually.

Their set starts with the song “Highway To Oblivion” where Marc comes on stage with sunglasses as Herman, Sam and Alicia have neon shutter glasses. This 80’s party is officially underway, and fans are pushing themselves furiously. The guitar riffs are non-stop as the band follows with “Fury Of The Storm” before slowing things down a bit with the ‘The Last Dragonborn”. As usual, Herman and Sam come on the center platform to showcase their skills when there are not running around on stage or on top of their arcade machines. Alicia Vigil is excellent on bass but is more in the background and leaves all the room to the two guitar maniacs.

Like I said before, DragonForce does not do things like any other band, when was the last time you had a Sega game commercial during a concert? Or when did you ever experience a medley of video game themes featuring Dracula’s
Castle (Castlevania: Symphony Of The Night) and Fight On! of Final Fantasy VII played on guitar by Marc Hudson! This is most likely a prelude to his forthcoming solo album inspired by anime. This interlude also gave time to Sam Totman to get dressed as a farmer and come on stage with a banjo to play the theme song of the Farming Simulator game along guitarist Gus G and Christian Douscha, things could not get any wackier than this.

The band got back to serious business with “Black Fire” and this ignited the crowd once again and they started singing the iconic Olé Olé Olé after the song, the fans were so loud that Marc was simply lost for words from the crowd’s appreciation. He tried his best to talk in French but it was Herman that did the most interaction in French and explained that the show was streamed on his Twitch platform and the viewers could not believe how loud the crowd was. The band followed with the acclaimed “Cry Thunder” and “Remembrance Day” where Marc indicated it was the mandatory ballad of the night, and was based on the soldiers that gave their lives in WW1. Fans had a mixed reaction and Marc cleverly added that if Sabaton can base their whole career on this subject, they can have one song! The band followed with “Valley Of The Damned” before leaving the stage.

After a long, and loud Olé Olé Olé from the crowd, the band came back on stage to close the night with their rendition of the Céline Dion classic “My Heart Will Go On” to which the band asked for a titanesque moshpit, before closing things with none other than, “Through The Fire And The Flames” and a stage dive from Marc Hudson!

Like ‘em or hate ‘em, DragonForce has a unique style that gets better and better with each tour and nothing exceeds like excess for these guys! They have a great relation with the fans in Montreal, and this concert showcased the band at its best. It is also the first time that I saw Herman without his traditional white shirt!