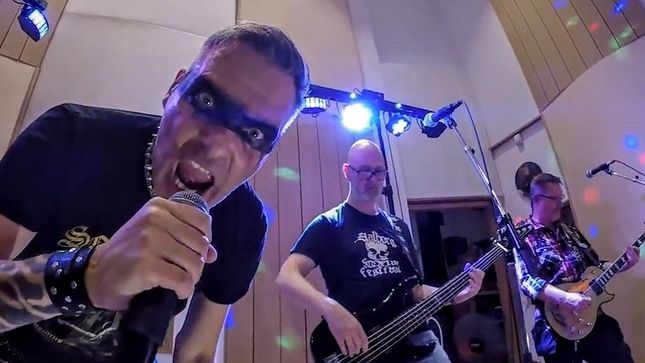 Lucky Swedes! Another, in a seemingly endless stream of, ahem, streams. Sweden decided against a lockdown, and as a result, bands are able to perform live, to reduced crowds, while the rest of the world is condemned to voyeuristic pursuits, at best. From producer/guitarist Fredrik Nordström's famous Studio Friedman, in their hometown of Gothenburg, the five members of Dream Evil crammed into one room: three across one wall, guitarist Mark Black seated and a new drummer, behind a full kit. Only singer Niklas Isfeldt took the time to dress for the occasion, in trademark stage outfit (augmented by new Sorcerer tee) and black make-up bar across this eyes. Peter Stålfors (bass) was in denim shorts, while Nordström opted for plaid shirt and chino pants. It quickly became evident the guys weren't taking themselves too seriously, joking between tracks and there was the odd blunder.

A few minutes late, an Isfeldt scream kicked off their best known number, "The Book Of Heavy Metal". Running gag, between songs was for the singer to have "producer" Nordström turn off the echo effect, so he could talk "normally". During "Chasing The Dragon", the bassist and guitar player engage in some synchronized moves, tongue firmly in cheek. The stream was free, but the guys were plugging a 50 Euro package that included a signed t-shirt & poster, including shipping, anywhere in the world. There was also Isfeldt's "admission" that his grasp of the English language was weak ("My English sucks!") and asked his bandmates to translate. Cue a string of curse words and anatomical parts, amongst a few laughs. In a rare moment of seriousness, the singer dedicated "Immortal" to a friend who is sick with Corona. Peter and Fredrik add backing vocals. It ends a cappella, showcasing Isfeldt's voice. Black's guitar sounds like a harpsichord, to kick off speedy "In Flames You Burn". The singer jokingly laments the lyrics to "Heavy Metal In The Night" didn't win any awards.

He mistakenly introduces the wrong song (round of laughs), but rights himself to announce "Fire! Battle! In Metal!", punctuated by an opening scream. Afterward he comments, "I think we picked all the fast (songs)." Following "The Prophecy", Isfeldt takes a jab at Nordström, asking him about "Crusaders' Anthem", knowing full well the guitarist had nothing to do with its construction (that falling to the singer and drummer, at the time, Snowy Shaw). The final track of this abbreviated 45 minute set, is dedicated to the fans. Begun with subtle guitar, courtesy of Black, Fredrik quickly joins the crescendo building, sing-along anthem, "The Chosen Ones".

Rare opportunity for most, to see/hear Dream Evil, now preserved online, for eternity (or until they delete it).