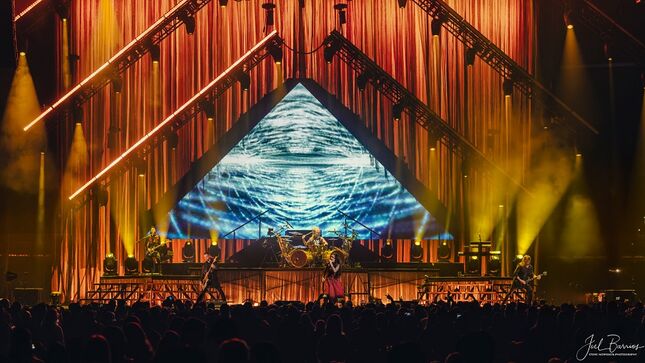 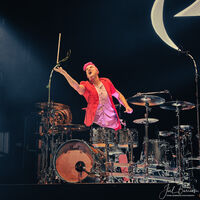 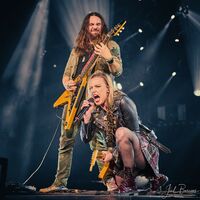 Female-fronted bands are nothing new under the sun nowadays, and certainly not the novelty they used to be back in the ‘70s, where you could count the successful ones using the fingers of both your hands. In all honestly, I’ve always despised such decades-used ‘definition,’ as it bundles them all together in one sexist subgenre – segregating them from their male peers and labeling as an exception to the rule – when in reality they have been rocking, progressing and steadily dominating more and more musical landscapes, undoubtedly giving their counterparts more than a run for their money. For my taste there’s always an added element of enthusiasm in a performance where the spotlight is on one of these uber-talented women who can easily showcase the sheer authority and charm of what once was stupidly categorized as the ‘weak sex.’ Now, offer me a spectacle including two influential and highly regarded acts which have managed to claw their way to stardom, and charted multiple times in the Official Rock and Metal Albums Top 40, and suddenly I have a reason to engage in a very long roundtrip to witness a Halestorm and Evanescence tour stop with my very own eyes.

Despite being 4 and a half hours away from my place, Tampa’s Amalie Arena is easily one of the top three venues I’ve had the chance to work at during my photo-journalism venture. However, what gives it such spot is not precisely its size (even though I’d have to admit 670,000-square-foot is an impressive number) or its premier entertainment features, but the respect and professionalism you are treated with by their media representatives. I’ve experience firsthand a much different approach to photographers and press in general at numerous other places, therefore it feels just right to give kudos to them for the kind and helpful demeanor towards us, certainly the cherry on top of the whole experience. 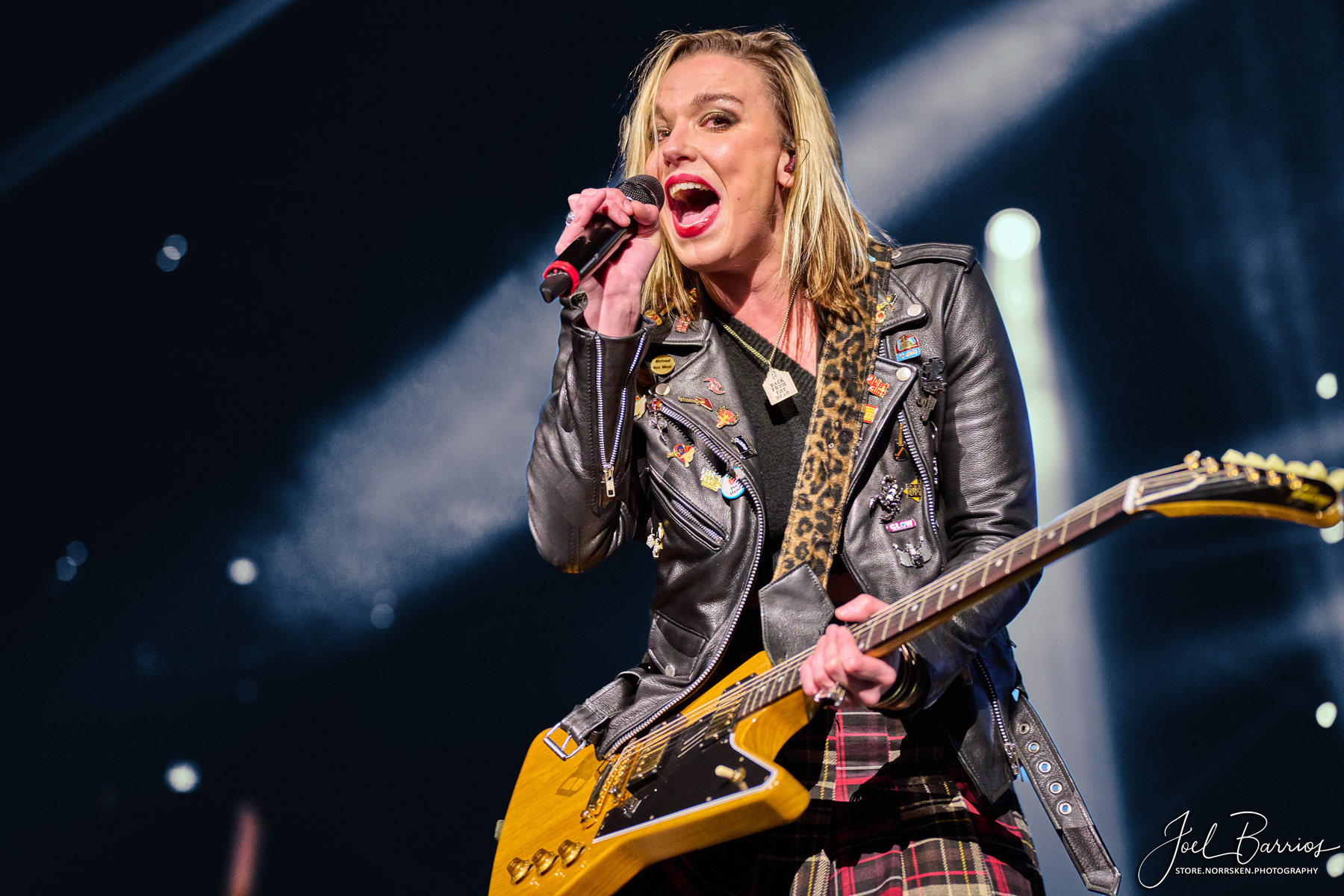 Describing the night events is a daunting task, because no matter how good I can be with adjectives, you needed to be there and ‘feel it.’ Halestorm opened the festivities swinging for the fences, in a tight, passionate, and adrenaline-charged set. The magnetic stage-persona of Lzzy Hale was the main focal-point, combining her rare ability to take her voice to the edges of exploding with the precise moment in which she holds it back, offering the cheerful crowd a raw, fervent and memorable presentation. Right behind her and outfitted in colorful clothing, her brother Arejay Hale ramped-up the celebratory spirit to higher levels with his theatrical yet precise drumming, playing standing up, throwing sticks in the air, spitting one out of his mouth and catching it mid-beat, or taking things up a notch by serving-up a tasty drum solo with oversized drumsticks.

An array of dancing multicolored lights bathed bassist Joe Smith and guitarist Joe Hottinger as they moved around pushing the upbeat, funkier at times, and unquestionably riff-heavy 11-song set as far as it could go, tearing through cuts like “Do Not Disturb” and “I Get Off.” Hale and Hottinger exchanged solos more than once on the handful of extended jams the band mixed into the set, her Gibson Joan Jett Signature Melody Maker guitar effortlessly spitting gritty and hard-edged notes.

In one of the many striking moments of the evening Evanescence's Amy Lee joined Hale at the piano to perform Halestorm’s “Break In,” certainly a treat for the frenzied audience able to observe the profound admiration the two singers hold for each other oozing throughout the poignant track. Returning to full hard-rock mode and pulling all stops during the process, Lzzy and company closed the set with a double punch of "Uncomfortable" and perhaps their most recognized hit, the colossal “I Miss Misery,” a real throwback classic-style hard rock cut with anthemic choruses that transported my mind to the Pat Benatar’s "Heartbreaker" era. 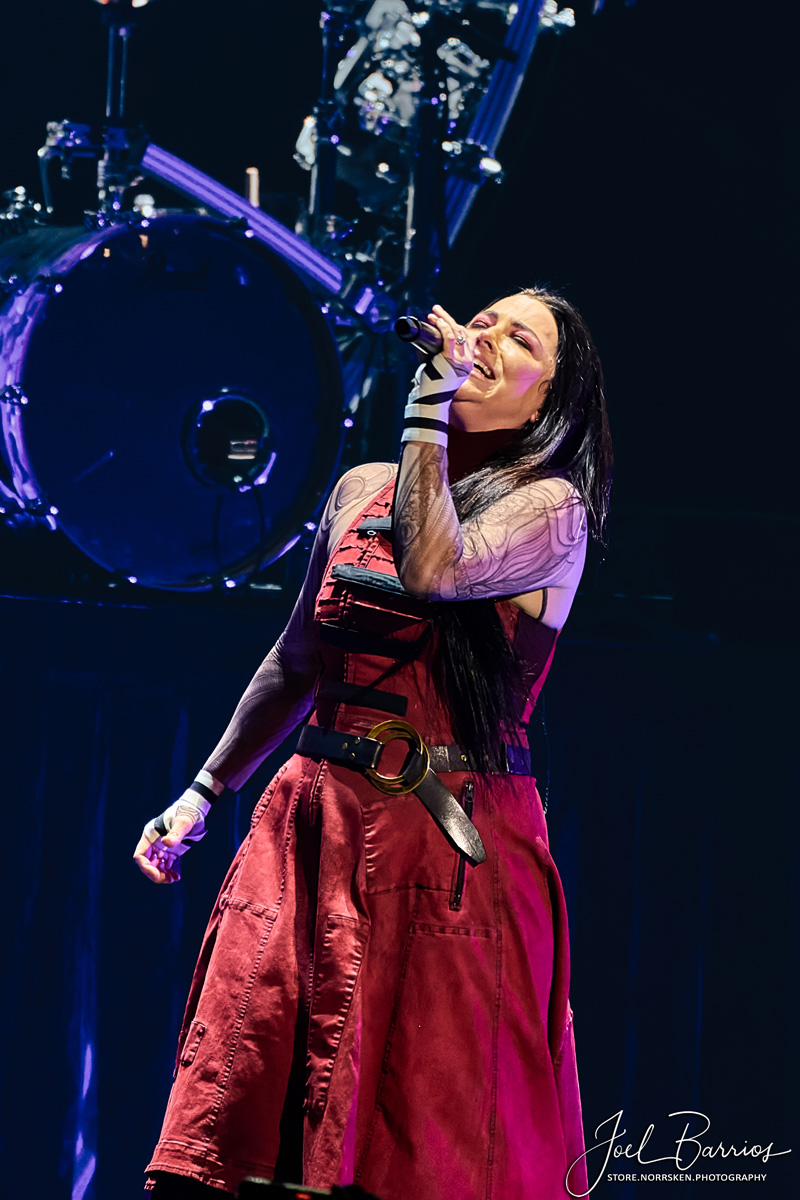 Halestorm surely left the crowd amped and hungry for more, the bar categorically set very high for Evanescence to follow. But following they did, with arguably the longest collection of songs they have played in a long time. In a bold move, that unquestionably paid-off judging by the audience’s unwavering reactions, the 19 songs setlist included most of the band’s most recent album “The Bitter Truth,” with the opening salvos relying upon duo of the dramatic gloomy rockers “Broken Pieces Shine” and “Made of Stone” before pressing the ferociousness pedal with the “Take Cover,” doubling down on the fans’ oomph and adding to it exponentially.

As you could expect, Amy Lee’s spellbinding voice was the main driving force throughout the performance, unquestionably stealing the spotlight. She had no challenges to overcome with his vocal delivery, it remained vivid and stunningly resounding while she moved across the stage, sometimes appearing behind’s Will Hunt’s elevated drum throne, or simply coming all the way to the front as the tempo built to a crescendo. Her bandmates served-up an impeccable performance, stickman Will Hunt punishing his expansive drumkit with vehemence and headbanging incessantly, while guitarist Troy McLawhorn and bassist Tim McCord provided and avalanche of down-tuned riffs and thunderous low end, and guitarist Jen Majura rounded out the sound with stellar backing vocals. All of the above was accompanied by enthralling visuals displayed through a pyramidal screen at the center, paired with diagonal LED lights handing both side above stage which illuminated the already spectacular stage setup. 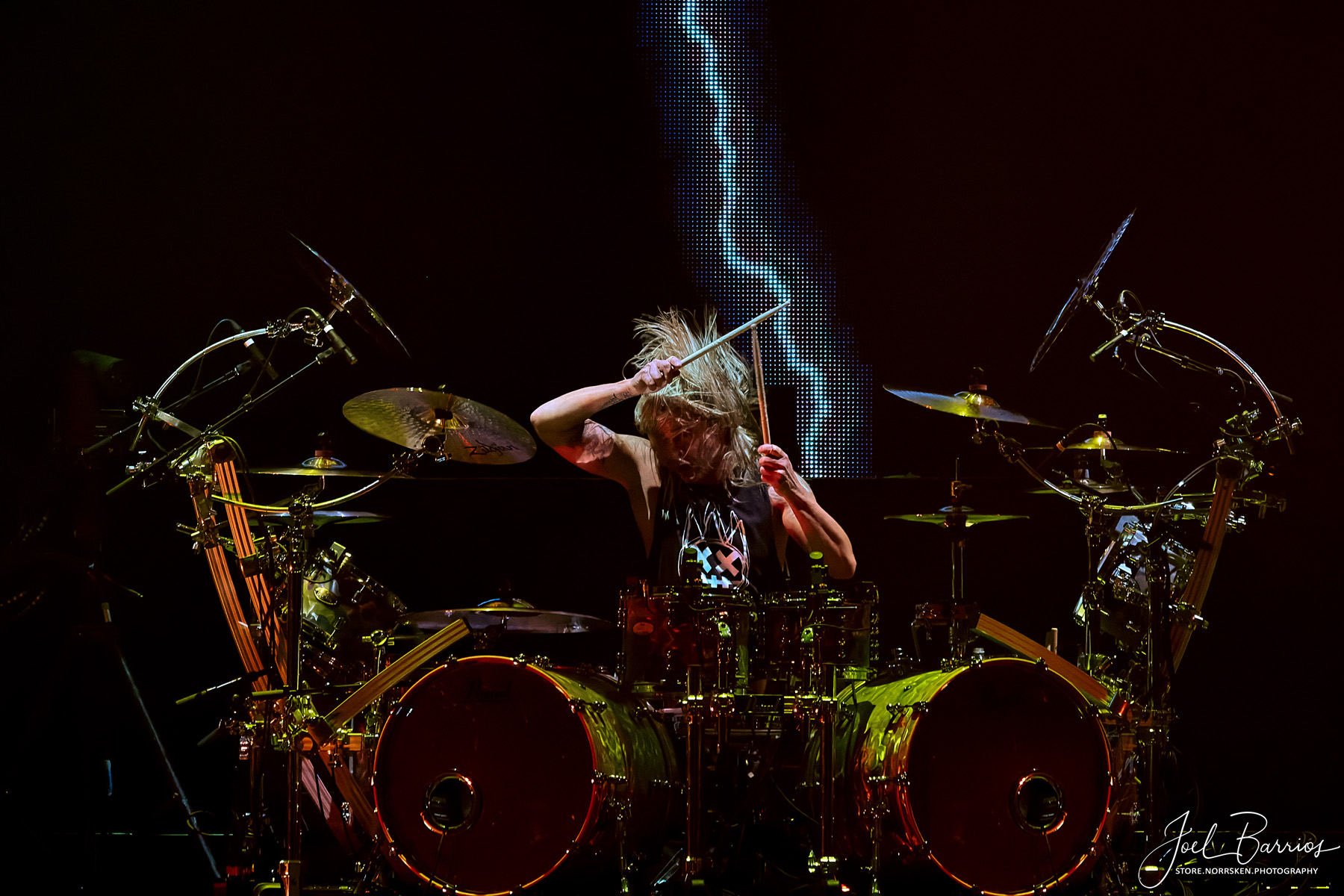 Some of the sets peak moments were driven by the band’s lesser-known songs. “End of the Dream,” taken off their Synthesis album was remarkable in both stage design and delivery, meanwhile midway through the set, a ‘home movie’ video played in the triangular screen, showing a myriad of with scenes spanning the band’s 26-years career before they launched into a roaring interpretation of “Better Without You.” This time around Lee brought Hale out to sing together an enthralling cover of Linkin Park’s “Heavy,” both singer’s voices soaring to the stratosphere.

With the entire crowd singing along, two more tracks made presence: the anthemic “Use My Voice” followed by the band’s breakthrough hit, “Bring Me to Life,” this time minus the male vocals. After a short encore break, Lee sat at the piano for a categorically emotive performance of the ballad “My Immortal” before the rest of the band joined her to close things out in theatrical fashion with one of the highlights from their recent album – which closes it as well – the atmospheric, groovy and lyrically-psychedelic “Blind Belief.”

The “98ROCK's Not So Silent Night 2021” was a testament of how much bands like Halestorm and Evanescence continue to be the torchbearers of celebrating the power of women in rock, taking it onwards and upwards. Adventurous and full-throttle hard-rock songs, with mandate-from-the-gods riffs, wall-shaking drums and climactic guitar solos, plus the fierce and explosive presence of Lzzy Hale and Amy Lee simply took the spectacle to an exclusive place, one were only portentous and cathartic exhibitions of first-class musicianship are admitted. Bravo.