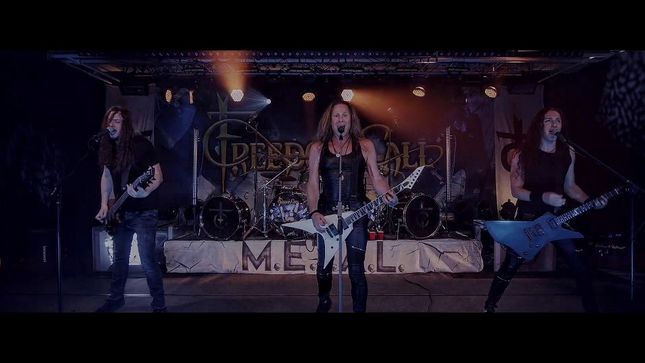 One of the many Corona-era hassles is international travel. With closed borders, doesn't even have to be airfares, as train and car access are denied. Case in point, Freedom Call's Italian bassist, Francesco Saverio Ferraro, couldn't gain access to Germany, to take part in the band's livestream concert, but the band soldiered on, with a temporary replacement. Seen the power metal outfit at ProgPower USA, 70K Tons, as well as the Bang Your Head and Knockout festivals, on their native soil. However, it wasn't until the Covid-19 lockdown that they had my undivided attention. You see, the other venues held the prospect of "distractors," unlike the computer screen, in my home. Frontman/guitarist Chris Bay is a confident, self-deprecating cad, who truly enjoys what he does. The enthusiasm and comedy comes through in spades! 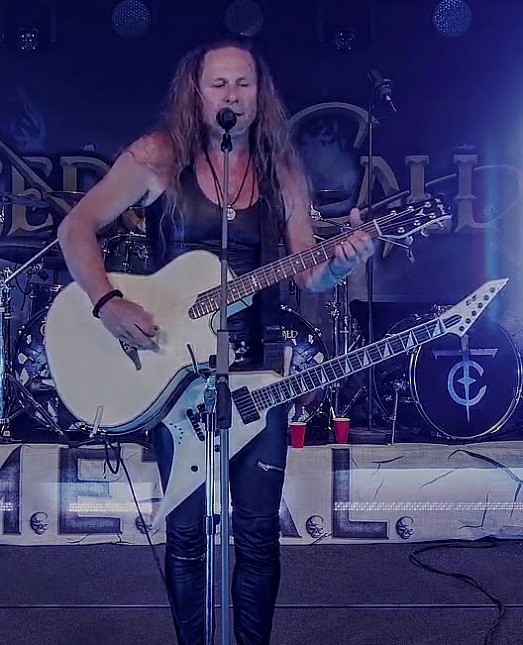 There was some discrepancy if the set was actually live, as there was a pre-recorded, talky bit, from the tour bus, beforehand. Then, when they took the stage, the screen was in letter box format (even at full screen option) and each song title was superimposed onscreen, with frilly production banner/frame (although anyone who has watched the Wacken simulcast knows they can do that virtually in real time, provided someone knows the setlist). The facetime call from their missing four-stringer looked fake, as well. Anyway, for more than 80 minutes, Freedom Call gave fans a fun Saturday morning/Friday night/afternoon (depending upon one's location). Initially, the stage was dark, the trio backlit, guitar and bass on risers, either side of centrally located drums. When Bay popped on, they kicked into "Union Of The Strong". Up close, he loves a camera, mugging and tongue out. The musicians bounced, as smoke filled the empty room (even partially obscuring the visuals), during "Tears Of Babylon"! When done, piped in applause (from a smattering to filled-stadium cheering) added a laugh to what is a laughable situation: performing in front of (essentially) no one. If people were concerned this was staged, a cymbal stand fell over, during "Sail Away".

Green lit "Metal Invasion" followed, with Bay playing to the lens. He was quite gabby (in English) between songs and while he did mention charity and merch, it was tasteful, and at one (later) juncture, quite heartfelt. The title track from the recent M. E. T.A.L. album, a brotherhood anthem, began with the bounce of unseen synth. Come the chorus, each letter is individually announced, in what surely is better as an audience sing-along. Something even the copious shroud of smoke couldn't hide. Tongue-in-cheek, Bay prefaced the next song with the following explanation: "We are a pussy metal band (bug-eyed, shocked expression, into the camera). There are bands that write songs like '666, The Number Of The Beast'. Freedom Call writes '111' the number of angels." Cue said track, during which, he ad libs a little Freddie Mercury, one-word homage, "Galileo". Their signature cut saw the multi-tasking frontman say, "Tell your friends, your grandma, your cat." Later, he'd ask for those watching to scream. After imploring a second time, he deadpanned, "That was much better!" As it wound down, he chided, "You sing for us."

More than once he coyly "confided" that technology allowed the band to see/hear the folks at home, implying, like Santa Claus, that he'd know who was being naughty (not participating) or nice (joining the festivities). A brief bit of a cappella vocals to start "Power & Glory", then Scottish bagpipe for this happy metal party. A solid body acoustic, on a stand, was produced, offstage, and as Bay tuned it up, he turned serious, saying, "(This) virus took away our passion, a piece of our heart. Not just us, but all musicians." He strummed a little, turning the titular chorus of the oft covered (Leonard Cohen/Jeff Buckley/etc.) "Hallelujah" into "heavy metal". Returning to normal fare, with his high pitched, early Kai Hansen (Helloween/Gamma Ray) intonations, it was a smoky haze on "Metal Is For Everyone". Thanking the Corona Concerts site and those that made this (now rare live occurrence) possible, the acoustic returned for "Warriors", complete with backing vocals from all but the drummer. More bagpipes, at least to commence "Far Away" as the twin, stage front, smoke volcanoes belched forth, again, the band pogoing in place. A galloping "Land Of Light" closes things out, although there's a group bow, before the screen goes blank. Glad I made it through a complete Freedom Call set. Hope it's not too long before we both can do it again, in-person!