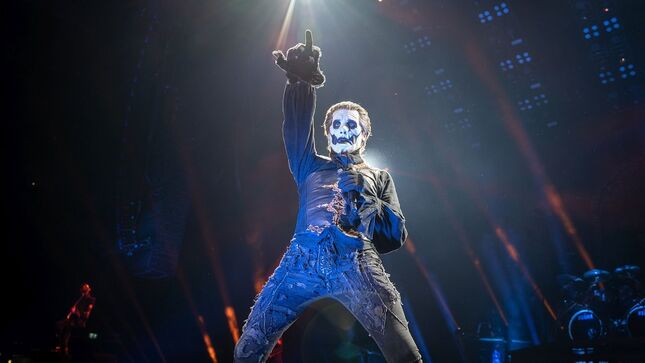 It’s been amazing to observe the growth of Sweden’s Ghost over the years. The first time I saw them was at the Sonisphere Festival in the UK in 2014, when, frankly speaking, they had just one noteworthy song “Rituals”, but what a song it was! The next time I saw them at Graspop in Belgium in 2018; they already had a whole bunch of hits that kept playing in your head for weeks. And now this band is on a worldwide tour, gathering stadiums!

The last band’s album, Impera, was planned to be released as early as 2020, but (for some reason), delayed until March 2022, but now it is finally out. The band recently finished the US leg of the respective tour titled Imperatour and is shaking the European continent.

In April 2022, Ghost descended on British soil, gathering tens of thousands of fans in Manchester, London, Glasgow, and Birmingham. In London, one of the largest city’s venues, O2 Arena, was haunted on the evening of April 11.

The evening started with a short, but memorable performance from the eccentric band Twin Temple from Los Angeles. Though not strictly a metal band, this duo was a perfect fit with their Satanic-themed songs, styled as American ‘60s rock’n’roll. I tried to watch some of their music videos afterwards and I was lucky I did not do it at work!

Unsurprisingly, Ghost have started their show with “Kaisarion”, the opening song from the Impera album, which is the ideal first song for any concert. Over almost 2 hours, Ghost played songs from Impera, including “Spillways” (I thought for a moment it was Bon Jovi’s “Runaway” cover), “Hunter’s Moon”, “Call Me little Sunshine” and all the mandatory “Rituals”, “Mary On The Cross”, “Miasma” and others. Metallica’s “Enter Sandman” was a great surprise, while “Dance Macabre” made 20,000 people dance like the last time.

In the next few weeks, Ghost continue their Imperatour in Germany, Czech Republic, Finland, Sweden Norway, Italy, Spain, Austria, Switzerland, and Hungary, but we will wait to see them back in the US and the UK!