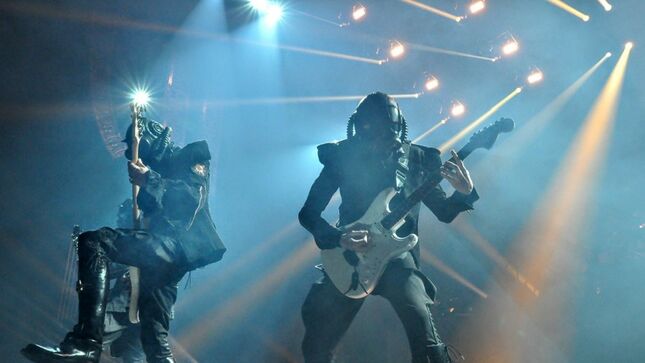 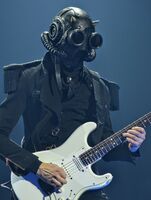 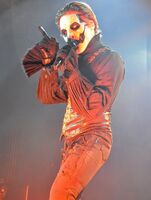 First time I saw Ghost was in 2011, in Helsinki, at the old Finnish Metal Expo (FME). Since then, seen them many times, highlights include playing alongside Iron Maiden and Sabaton, outdoors, in Oberhausen, Germany (July '13) and the infamous Atlantic City gig (June '12, as part of Metallica's ill-fated, two-day Orion Music fest) when the entire band: Papa and the Ghouls, were attired, head-to-toe, in white! Philly loves Ghost, so many a couple (and families, with pre-teen kids) were in attendance, Valentines' weekend. Like Alice Cooper, KISS, and King Diamond before them, some fans dressed for the occasion: guys tended to paint their faces, while the gals bust out (pun intended) religious regalia.

Unlike the empty hockey barns the tour has been hitting, tonight's usual summer amphitheater has permanent, fixed seating (lawn closed for the winter months), preventing the long gangplank/catwalk that usually extends into the audience, although the normal stage was augmented, slightly. There's still a triple paned backdrop of mock stained glass windows, emblazoned with ex-popes, while the band itself has undergone a visual upgrade. Most notably, the red clad Cardinal Copia is no longer the frontman, instead Tobias Forge portrays Papa Emeritus IV. Minus the classic Catholic inspired bishop/pope mitre headgear of his three geriatric predecessors, he appears as something of a white grease-painted, skeletal scarecrow/The Joker (especially the Cesar Romero portrayal, on the ‘60s TV version of Batman), a character with the impish temperament of Austin Powers. "Oh, be-have!" The musicians, aka Nameless Ghouls (who will be granted a couple of moments to showcase their musical prowess; black guitar wielding Ghoul even providing backing vocals throughout), now sport helmets featuring dual breathing tubes and old-school, bug-eyed aviator/racing goggles. In a quick glance, they look like Motörhead’s snaggletooth mascot, come to life. 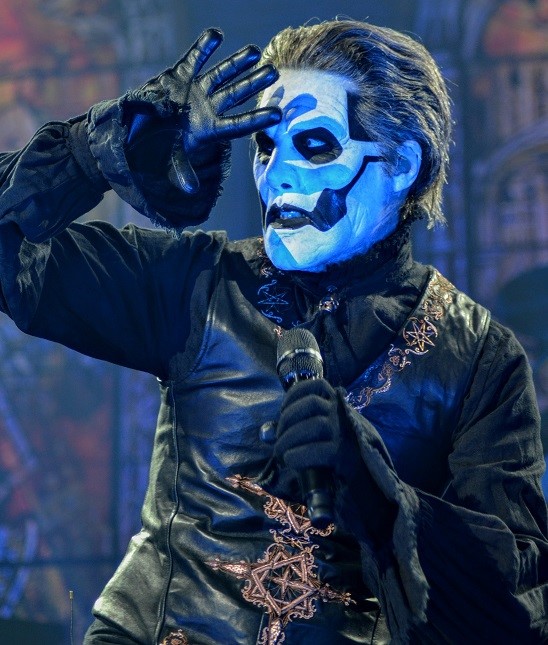 A Ghost concert is the aural equivalent of an amusement park visit: fun, although in some respects, it seemed a PG version of the old band: safely sanitized of sex and Satanism. Even without lyrics, the brutal bombast of Slayer, plus an occasional hyena wail from Araya, left little doubt of its insidious intent. Like the Child Catcher, from Chitty Chitty Bang Bang, selling his sneaky agenda by imploring "Ice cream! Lollipops!" this amalgam of ‘70s pop/hard rock sees a greater number of flies buzzing around their (tongue-in-cheek) nefarious ointment. With liturgical instrumentals presaging Ghost's arrival, a white sheet initially obscured the stage. Intro over and the scent of incense ripe in the air, a shadowy figure, on guitar, was visible behind the makeshift screen. With that, the curtain dropped and the show was on. Bold, opening with a new/unreleased song ("Kaisarion"), but the congregation is plugged into the Internet, so undoubtedly had already seen/heard live renditions, from earlier in the tour. No such problem with the high energy "Rats". "Are you a man, a mouse, or a rat," asks the frontman, having already ditched his fringe epaulet military uniform jacket for an ornate vest (the first of many wardrobe changes). The fans belt out the titular chorus, while Forge visits the all the converts, venturing from riser left to riser left and punctuating each repetition of the title with a skyward fist.

Third song in, "From The Pinnacle To The Pit", produces yet another example of the varied sounds within the Ghost repertoire. With voiceless and (in effect faceless) emotionless henchmen, Forge and Co. borrow B&W/silent film era mannerisms (Lugosi's Dracula, Lon Chaney as the Phantom) to pantomime emotions that are televised on the arena's Jumbo Tron, for those beyond the first few rows. While our (anti) hero is perched atop the drum riser, a concussive explosion brings the song to an end. With allusions to the Ghost backstory (family a succession of evil popes, hence the current Emeritus being the fourth), Forge announces the short, purple (or should that be lilac?) lit Flower Power vehicle "Mary On A Cross" as "A song my Papa used to sing to me." The calliope sounding electric organ anthem is followed by "Devil Church", essentially a guitar intermezzo which sees both of the six-string tandem (spotlighted) on opposing side of the stage risers, preparing for a duel/showdown. Mad magazine's Spy vs. Spy, with amplification! 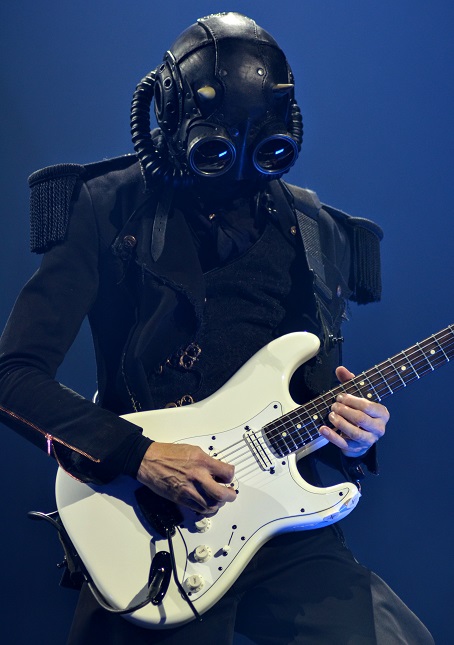 Under a heavy canopy of theatrical fog and ominous crimson lights, the stomping heaviness of "Cirice" see Papa return, wearing black bat wings, ala early ‘70s Gene Simmons. Time for another selection from the still-to-be-released Imperia, the lilting "Hunter's Moon". Forge, now resplendent in all black ensemble (frilly cuffs) accented by skinny, teal New Wave tie and black waistcoat, prances about. In all honest, this portion of the set bogs down a bit, not helped by a song suffering from the lack of recognition/fanatical reaction that the older (well known) stuff enjoys. Perhaps sensing as much, Papa accentuates blue bathed "Faith" with some blue language of his own: dropping a few F-bombs. The short, purple hued "Helvetesfönster" highlights the dual keyboards, one either side of the drum riser in another voiceless, cleared stage intermezzo.

Righting the ship, piped-in intro of Latin chant heralds "Year Zero". As if smoke and crimson lights weren't enough, there's literal fire (if not brimstone), with eight flame cannons aimed toward Heaven. Papa is now adorned in floor length cloak with skull patterned ecclesiastical vestments. Despite depictions on the backdrop, album artwork and copious merch items, it's a shame the band's iconic (anti-pontiff) image has been relegated to a mere one-song cameo, in the live set. Worse yet, all the photographers were removed after the third song, so no ongoing visual evidence. He's minus the ornate, W-shaped/butterfly headpiece for a more rocking "Ritual", working his way around the copper illuminated stage. To start, the Ghouls (his Minions) headbang, as their leader demands the crowd sing along. A lightning storm of strobes accompanies the rain of notes. Comically, it ends with extended guitar sustain (courtesy of the white guitared Ghoul). So much so that his dark instrumented partner ascends the riser, motions for him to "cut it", then fumbles with knobs, unleashing a torrent of distortion. 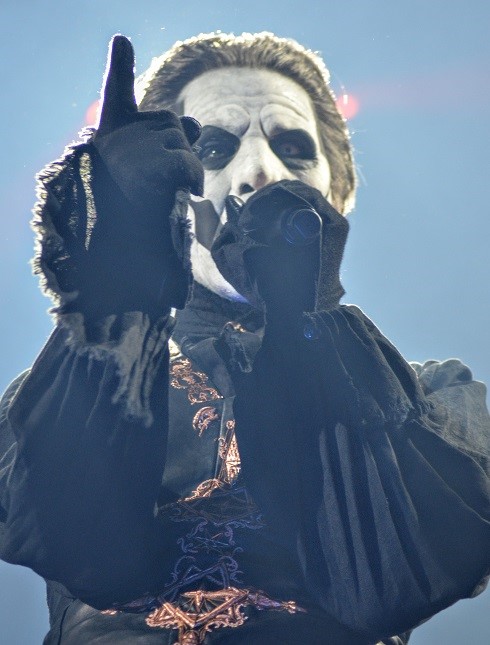 Much of the last half hour is just talk and a trio of Ghost material, plus (for some reason?) a piano ballad begun cover of Metallica's "Enter Sandman". Like they need the plug? Maybe as a two hour headliner, but in a mere 75 minute set (and at the expense of another original)? First there's the carnal (not cardinal) monologue, introducing green tinted "Mummy Dust", the host/emcee now wearing a glimmering teal suit coat. He employs a heavy, sort of sinister, death metal-lite vocal. Even a Ghoul with a keytar can be spotted, center stage. As it ends, the air is filled with its namesake, the first, but not last spraying tonight.

Papa starts what is essentially an unscripted encore with the aforementioned 'Tallica track. He demands ass wobbling, as he skips/runs around the stage to the infectious ear-candy of "Dance Macabre". A kaleidoscope of colored spotlight seemingly search the skies aimlessly. He works the right side riser and staircase fronting the drums, even feigning a fight with the black guitar Ghoul, before falling to the deck of the stage. The joyous clap-along concludes in a much more impressive shower of confetti. "Square Hammer", the jubilant sing-long finale, begins with a trio of guitar/bass wielding Ghouls positioned at the lip of the stage. Cue fiery explosion. Several banks of white headlights pinwheel upwards, from the crowd, to the Heavens. To cap the evening, Papa holds the last "Right here, right now" a cappella.