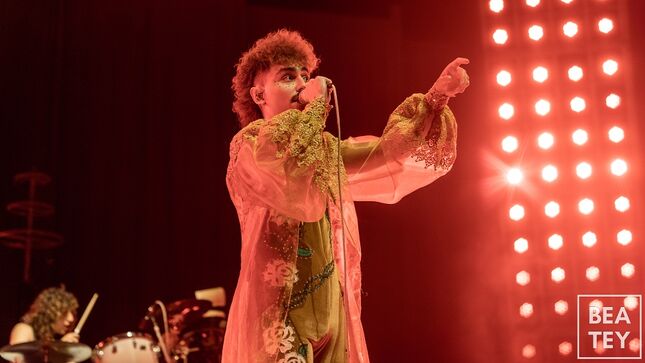 Greta Van Fleet made a triumphant return to Canada on August 16 as the Dreams in Gold Tour came to Quebec City. Supported by Hannah Wicklund and The Pretty Reckless, the crowd was baptized with fire in a night of rock ‘n’ roll revival.

South Carolina star Hannah Wicklund kicked off the night with an electrifying set. Her blues-rock anthems had fans grooving early on and set a fantastic precedent for what was to come. The Pretty Reckless took the stage at 7:50 with a set that simply blew the crowd off their feet. Led by Taylor Momsen (vocals), the band also consists of Ben Phillips (guitar), Mark Damon (bass), and Jamie Perkins (drums). Their dark music was shaded with themes of rebellion, wickedness, and sin. They riled the crowd with hits like “Going To Hell” and “Heaven Knows.”

Just before 9 PM, a curtain fell bearing symbols from the artwork of Greta Van Fleet’s latest album. Behind it, the band assembled, their shadows taunting the audience. Meanwhile, fans were guided into the thematic landscape of the night through the recitation of a poem by lead singer, Josh Kiszka. Over the speakers it echoed and concluded: “all across the world we traveled wayward for in search of themes to hold. And, in the end, we will spend the weight of dreams in gold.”

Hidden away, guitarist Jake Kiszka hit the opening riff of “Built By Nations”. Finally, the curtain dropped and rock n’ roll chaos ensued. Immediately, the crowd was blasted with pyro and smoke. The band’s return to Canada was clearly not going to come quietly.

Greta Van Fleet consists of vocalist Josh Kiszka and his two brothers Sam (bass, keys) and Jake (guitar), alongside pseudo-brother Danny Wagner (drums). The band, formed in the small town of Frankenmuth, Michigan, has taken over the world in the past year after viral success in the summer of 2021. With the release of their second full-length studio album The Battle At Garden’s Gate, they hit the road in March with three homecoming performances in Michigan. Unfortunately, pneumonia sent Jake to the hospital and the rest of the North American leg was postponed until the summer. Now, healthy, rested, and ready to hit the road, Greta Van Fleet is back.

The crowd never stopped their cheering and applause from the moment the band stepped on stage. Recent hit “Heat Above” had nearly the entire crowd singing along before “Light My Love” turned the venue into a sea of swaying lights. Fans were thrilled to see Jake trade his Gibson SG for an acoustic as he played “Broken Bells,” though he switched back in time for a back-breaking solo in the second half of the song. One of the group’s most popular songs, “Safari Song”, was punctuated by a show-stopping four-minute drum solo by Danny. He poured all of his talent onto the kit and left it there for fans to lap up.

Perhaps the highlight of the night came when Sam played the opening chords of “TheBarbarians” on his mellotron. The song off their new album has only been played live two other times, once in Berlin and once in Chicago, making Quebec fans some of the few lucky audience members to have experienced it live. The title track of this tour, “The Weight Of Dreams”, featured a nearly 7 minute guitar solo by Jake while Josh took to the tambourine. At the climax of the solo, smoke and fireworks set off in the room while Jake threw his head back in celebration.

The encore consisted of fan favorite “Age Of Man,” which features Sam playing both the organ and keys simultaneously. To close out the night, Josh sarcastically introduced his “favorite song in their discography,” “Highway Tune”. To keep things interesting, the band threw in a rendition of “That’s All Right” by Elvis in the middle of the song. After waiting many months for the Dreams in Gold Tour to come through Canada, it is safe to say that Quebec fans earned every last drop of excitement spilled out into the Videotron Center.

You can catch Greta Van Fleet on tour across the US through December 9. For more information visit gretavanfleet.com.