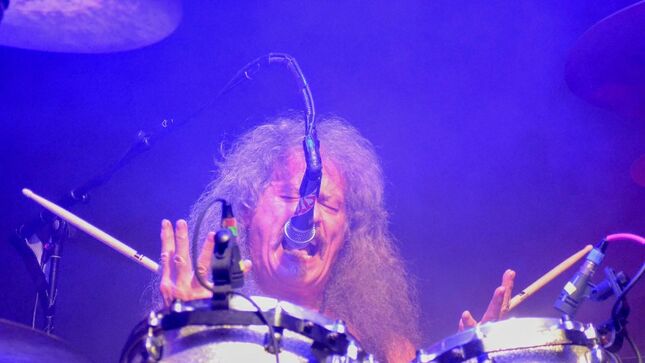 As an adjunct (and separate admission) to the two-day main festival, Houston-hosted Hell's Heroes offered a "night before" gathering, to whet the appetite for the next day's real McCoy. In all honesty, some locals (and a few early arriving out-of-towners) utilized Wednesday's Bay Area Strikes Back tour date (Testament, Exodus, Death Angel) as the unofficial kick-off, creating an extended, four day festival. Wow! Unlike the actual event, the pre-show utilized only the larger, downstairs stage. The headliners were classic metal acts, Exciter and Helstar (playing Burning Star in its entirety), both reprising appearances from '19, the last pre-pandemic line-up. Toxik were also representing the over 50 set. All these guys were recording and touring the world before most of the musicians in the other bands were even born! The initial trio on Thursday were younger acts, from across the metallic spectrum: homegrown Texas blackened thrash trio Sadistic Force (tonight, dominated by red lights and a fog machine), Nite (not to be confused with Swedish hard rockers of the same name, albeit the more conventional spelling), the blackened San Fran export who were on a national tour w/ Bewitcher (who were part of Friday's roster) and opening the evening was Detroit's NWOTHM specialists Midas, about a week away from unveiling their eponymous full-length debut (on No Remorse), although many here were already familiar with their excellent CD-pressed demos (via Dying Victims, March 2020). 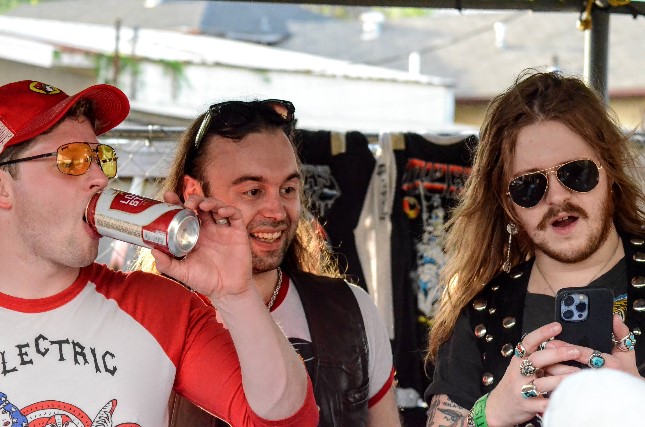 Didn't have to wait long to see one of my eagerly anticipated entries in the Hell's Heroes sweepstakes, Midas started soundchecking and just went into their set, no fancy introductions and it was at least 10 minutes before the prescribed 6 PM starting time. No matter as there was already a devoted contingent positioned at the barricade, eager to see what the Detroit noise merchants were dealing out. A four-piece, with twin Flying V guitars, off to a good start! In a haze of fog, accented by purple and pink lights, Midas opted to air first single (already heard on the Net) "Golden Chariots". Casey O'Ryan not only has the guitar god aura, but he plays a mean guitar as well. Couple of times he and singer/axe partner Joe Kupiec meet, face to face, center stage. Kupiec also plays from his knees. Newbie "Nobody Gets Out Alive" is built around a gritty riff. "Hell Has Frozen Over" as also aired, a tasty teaser of the forthcoming release. Can't wait!

Only casual observances of the next couple of bands, as more fans arrived and people congregated outdoors, to catch up on old acquaintances (especially in the post-pandemic era). The White Oaks complex has a large outdoor stage (not in operation during Hell's Heroes), but begs the question: how much more expensive would it be to split the event between the large downstairs room and the outdoor stage, rather than the rinky-dinky little upstairs room, that can only accommodate about a fifth of the patrons (at best). The event has earned its stripes and might be in need of an upgrade, without actually leaving its ancestral home. Something to think about!

Lots of excitement for Toxik, who opened with "Spontaneous" off their groundbreaking Think This (the title cut would eventually close the set). Long haired youngster/singer Ron Iglesias removed his shirt early on, while mainstay guitarist Josh Christen (who used to have flowing locks) was content to impress with a fleet fingered assault of frets, during the likes of "Greed", "False Prophets" and "Black & White". They came to shred, offering just old school classics. The ending trio, of "World Circus", "Haunted Earth" and the aforementioned title track was the stuff of legends. 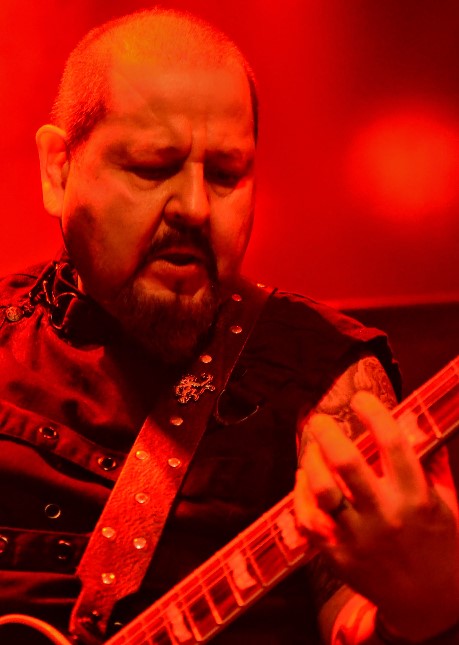 Speaking of legends, James Rivera and Helstar are virtual gods in Texas. Tonight was a turn the clocks back moment returning to their '84 debut, Burning Star (where James sang under the pseudonym, Bill Lionel) Shortly thereafter, they played their first gig outside of Texas, in Cleveland, Ohio (nothing like venturing a "little" outside your own back yard!), witnessed by yours truly and post-gig, joined the band members at a college radio interview. James and I have been friends for a long time. In addition to his now requisite pointed, vampyric incisors, Rivera like an extra from an Anne Rice movie in black trench coat, he sang with his round, wired rimmed eyeglasses. Not that he needed the help, but his Houston neighbors (and many visiting fans) sang the lyrics throughout, although the classic, red lit "Run With The Pack" got a rather boisterous backing tonight. To the singer's right, as was the case, almost 40 years ago, was guitarist Larry Barragan, laying down the aggressive leads. Helstar are always special ad this ageless platter confirms they were great, from the beginning. 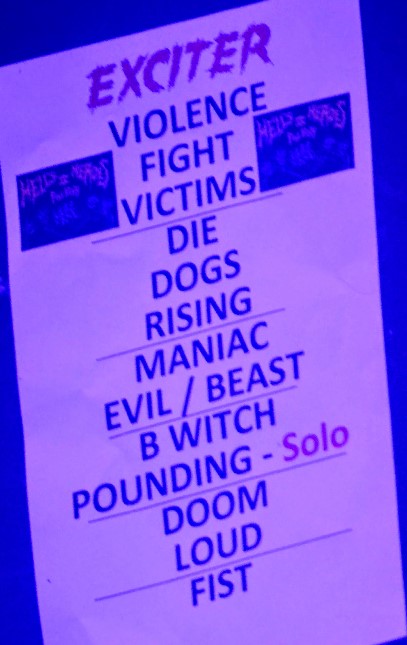 Capping off an evening n the time machine, was Canuck speed metal merchants, Exciter. Truth be told (and I said as much to Dan Beehler after the fact), his vocals on the 70K cruise left a lot of us old schoolers scratching our heads: the falsetto accents coming across as rough screeches. Well, time heals all wounds (or so they say) and based on the headlining performance here, apparently old (iron) dogs can learn a few new tricks. A few years removed and no vocal issues, better yet, a no frills career spanning setlist, with a few surprises/deep cuts! Kicking off with "Violence & Force", perhaps their best known number, was a no-brainer. A bit of a circle pit broke out soon after. Don't know how many of the younger generation have ever seen such a lethal singer/drummer combination, the dexterous Beehler simultaneously handling the speedy pounding and vocals like few others can. "Stand Up & Fight" and (bit of shock) "Victims Of Sacrifice" followed. In a slightly hunched, stalker gait, bassist Allan Johnson lurched around the edge of the stage, while guitarist/new boy Daniel Dekay went crazy running around, the side opposite. A rare Unveiling The Wicked track, "Die In The Night" flashes by. A grinding "Iron Dogs" changes the tempo, but only momentarily, as its debut-mate, "Rising Of The Dead" comes next. Really nothing like "Heavy Metal Maniac", in terms of tone, or clarion call for the fans. "Living Evil" segues into "I Am The Beast". When completed, Beehler takes three or four turns on the drum key, tightening the head of his snare, prior to "Black Witch". "Pounding Metal" turns into a sing-along: crowd shouting the repetitive titular chorus. A short, histrionic guitar solo greets "Beyond The Gates Of Doom" before "Long Live The Loud" brings the proper set to a close. They return, however, for a cover of Motorhead's "Iron Fist".

The band have a couple of Canadian festival appearances in May, as well as a short East Coast USA run (with Coroner & Vio-lence). If you get the chance to see/hear them, don't miss it!