IN FLAMES - Behind The Mask In Montreal! 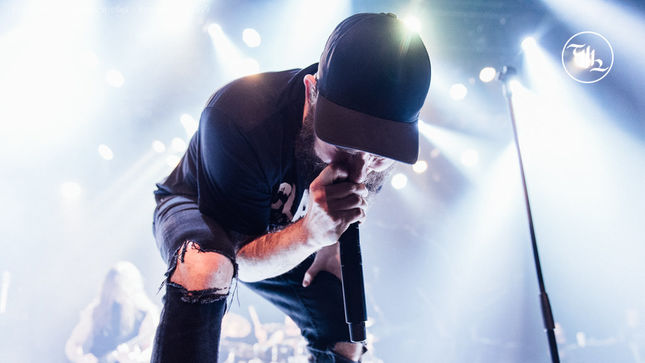 Even if they did a tour as an opening act this past spring, In Flames were back on the road in North America as a headliner, bringing the band Red and Arrival Of Autumn with them as opening acts. Fans were anticipating their concert at the Corona Theatre on December 4 and they took the place by storm as soon as the door opened.

Canada’s Arrival Of Autumn came on stage in front of an already packed place in order to get the festivities going. The guys are very energetic and are giving a lot of energy to the crowd. The vocals of Jamison Friesen are very good, but Kevin Student on bass is the man that catches everyone’s attention with his charisma. Fans were enjoying themselves in the mosh pit as the band played many songs from their recent album called Harbinger. Their music is nothing really new, but they do it very well and with passion. Being Canadian, the band proudly displayed their origin with the maple leaf in a satanic pentagram configuration on their kick drums.

Talking about playing Montreal for the first time, Red is another band that is going to try and charm the Montreal crowd. Even if the band is very energetic and giving a great show, their music might be considered too mainstream or generic for most of the fans as many simply stand, waiting for their show to end. Each song seems like it is a variation from the previous one, but there are a few fans that were waiting to see them for a long time and they are having the time of their lives. Michael Barnes constantly interacts with the fans and his voice is very powerful, but sadly, it is simply not enough to get the crowd going.

It was now time for In Flames to satisfy an eager crowd with their music. The show starts with the succession of the songs “Cloud Connected”, “Only For The Weak” and “Take This Life”. This is enough to get the crowd moshing like there was no tomorrow. As expected, their set was centred on their new album called I, The Mask, but they also included songs from almost all of their albums. The sound and the lights are impeccable and the latter gave an added dimension to their show. As usual, Anders Fridén constantly interacts with the fans and was really surprised to see how they reacted to the old songs like “Behind Space”, “Graveland” and “The Hive”. With more dates with the band under his belt, Chris Broderick looks more at home now and has great chemistry with Björn Gelotte. Their show ended with the songs “I Am Above” and “The End”. Fans want more, a lot more, but that was all the band had to offer. Anders did mention that it was their last Canadian show of this tour and they would love to bring them all across the border for the remaining shows. Once again In Flames gave an intense and very dynamic show that please old fans as well as new ones.