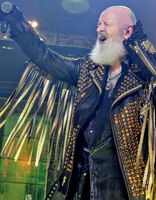 Reading, PA (like the railroad, in Monopoly, pronounced like the color, or Otis, aka "redding"), ninety minutes outside Philly, two hours from NYC. One of the few musical acts, in any genre to head out, in the teeth of the pandemic, make no mistake, this is a celebration of ALL things Judas Priest, not just the classic line-up era/albums. OK, there's no representation from Rob Halford's absence (ie. the Ripper years), which isn't surprising, as they've never truly embraced that time, once Halford returned. Wouldn't want to judge anything by the reaction to a setlist dotted with unexpected/deep cuts (some aired in North America for the first time!), from a secondary market audience, on the initial night of the tour, but will be interested to see if there's any rotations (in or out) of the running order, as this spectacle progresses across the continent, and then overseas. Boiling half a century worth of music down to two hours is a thankless task, sure to leave some fan favorites on the cutting room floor. Still, it's a bit shocking that "Lightning Strike" is the lone offering from Firepower. True, it's the most recent album, by the current incarnation of Judas Priest and the last tour anyone would have seen (albeit three years removed), but given the fact it was so well received (easily the best release since Painkiller), coming up with just one inclusion remains a head scratcher. 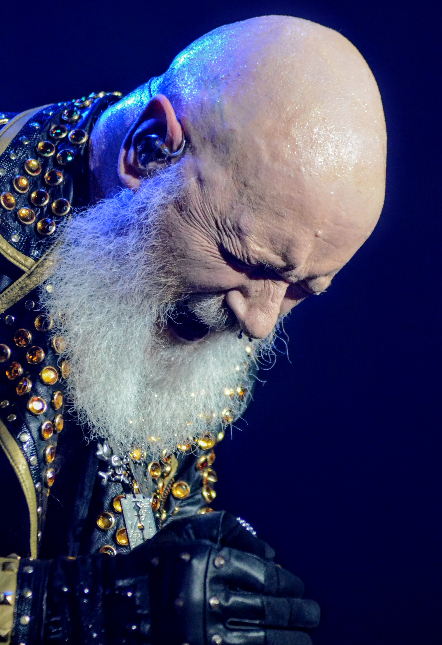 The stage is decorated with 55 gallon oil drums, switches, storage tanks and the stagehands wear onepiece grease monkey coveralls. The trident/crucifix that has long adorned album covers (as well as pendant, dangling from Halford's neck) is a lighting truss, beginning the night, face down, feet off the stage. As the show begins, it elevates, and rotates 90 degrees. The singer is escorted across the back of the stage by four handlers, each a hand on his shoulder. To tart, Rob is decked out in tasseled biker jacket (the accents an appropriate shade, for this golden anniversary). "One Shot At Glory" opens, giving Richie Faulkner plenty of opportunity to impress, striking all the guitar god poses, along the way. The song made its debut at Bloodstock, a few weeks back, so this the initial North American airing! Halford repeatedly walks the perimeter of the stage and up close, it's clear he's pierced his nasal septum since we last saw him, tiny barbells protruding from his nostrils. Also seems that the guys lost their razors during the pandemic, as prodigious facial hair is a must. Halford's bushy, snow white beard (and matching English heritage skin tones) make him look like some wizard, while guitarists Faulkner and producer-turned-stand-in-guitarist Andy Sneap have let their peach fuzz blossom into full-blown hairy chinny-chin-chins.

The aforementioned "Lightning Strikes" is followed by 80s video hit, "You've Got Another Thing Comin'", up early in the running order. Waggling his tongue, the singer coaxes and prods the titular chorus from the crowd. "Exciter" sees the guitar pair, both on risers, on opposite sides of the stage. Faulkner is afforded plenty of room, frequently venturing in front of the wedge monitors, located near the foot of the stage, but behind the blinding lights that are actually affixed to the edge. As Halford switches to a new, all-black coat, blue and purple lighting, augmented by two dozen white search lights, criss-crossing the stage, leads to the once-reviled-but-now-revered "Turbo Lover". Once the photogs vacated the pit, television cameras provide those at the back of the venue, with front row perspectives, in real time. They are shown on a screen, behind the band, which also offers visual accompaniment to some songs, like the fire and pumping pistons, here. While the crowd sings along, Faulkner drops to one knee, in something of a modified catcher's crouch, near the front of the stage. 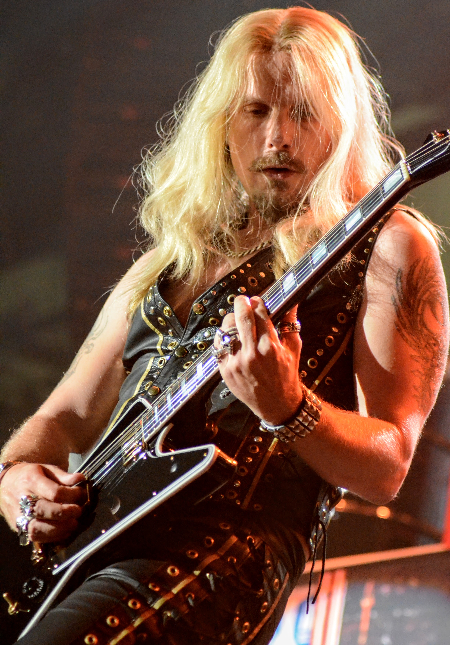 Red/green lit "Hell Patrol" has the singer sort of dancing (shimmying?). Under matching blue spotlights center stage, the axe tandem join forces to kick off the pink/white bathed "The Sentinel". The verses are almost spoken word delivery, as Sneap gets some hammer on action, trading flourishes with The Falcon, under alternating white spotlights. Completed, all leave the blackened stage, as the word "Censorship" appears onscreen, overhead. Cue the slow grind of "Touch Of Evil", wherein Halford raises his hand to the sky, like some demonic preacher. Finished his frenetic mid-song display, Richie kisses the neck of his Flying V.

"Rocka Rolla" begins in deep crimson hues, but only the first 6 or 8 rows of fans seem to recognize/appreciate this one. The two guitars throw down the trademark notes that open :Victim Of Changes", the Falcon flying up and down the fretboard. There purposeful echo and even some pitch shifting added to Halford's voice. Andy and Richie both take turns perched on their respective, side-facing risers. Quick hitting "Desert Plains" follows, complete with driving scenery onscreen.  smokestack arise, at the back of the stage, as the initial, somewhat mellow, notes of "Blood Red Skies" churn. As it turns aggressive, the stage is illuminated in red, with images of a giant British steel mill complex. Halford reappears in a red cape, brandishing a similarly colored toy light saber, which will stay lit, on a pitch black stage (come the song's abrupt end). 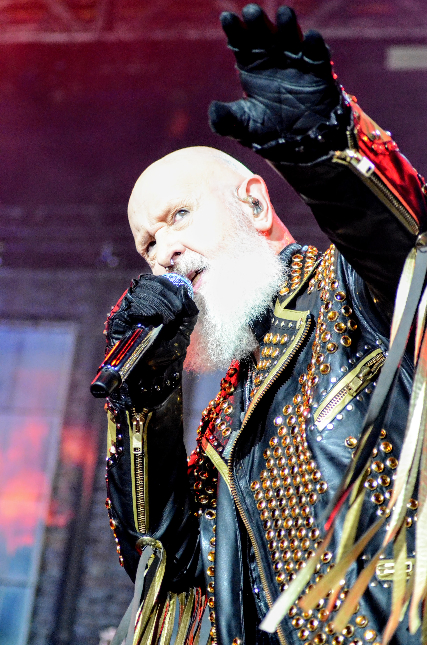 When he returns, the singer is in yet another biker jacket. Short (and most surprising inclusion) "Invader", which also had never been performed, prior to last month's one-off British festival, sees Sneap get some lead work in. Drummer Scott Travis actually gets to speak to/joke with the crowd, prior to pounding out the "Painkiller" intro. It's smoke from the rafters, red lights and strobes for the proper set ender. Halford sports yet another jacket, with JP and the words, heavy metal, on the back. This one really lets Faulkner shred, as a barrage of yellow lights zig zag, rapid fire about the stage. He adds a few pulls of the whammy bar for a final accent.

Empty stage, the trident/lighting rig rotates, to face the crowd, flashing colors and "The Hellion" morphs into "Electric Eye". Rob is now resplendent is a sparkling silver smoking jacket. Metal Popeye and the Falcon toy with each other, center stage. The stage goes blank again, then the roar of a motorcycle engine, pierces the darkness. In a puff of smoke, there's Halford, atop the beast, with leather cap, riding crop and (somehow) another wardrobe change, this time a jacket emblazoned with a red.white chain-link motif. He sings the entirety of "Hellbent For Leather" astride the bike. The guitarists each prowl in front of the monitors. It proceeds into "Breaking The Law", pink lights and fog shroud the stage, as Rob dismounts the hog. Riding crop in hand (not a maestro's baton), he conducts the first of two massive sing-alongs, "Living After Midnight" bringing the show to a close.

Thank you, Judas Priest, for all the memories, past and future!

Some fans were disgruntled about having to eat tickets (no refunds allowed) when the "event organizer" decided, at the eleventh hour, that vaccinations were required (along with mandated masks). While it was the first post-pandemic show at the Santander Arena (who also apparently outlawed smoking, even in/out option, during their closure), the rules/changes in policy were not clearly announced, ahead of time, leading to the confusion. All concessions, including merch, were cashless points of sale. And this was only my first time at the venue. So, as we re-enter the concert arena, to avoid/minimize disappointments, check out the current situation, regardless of how many times you've visited the location before. 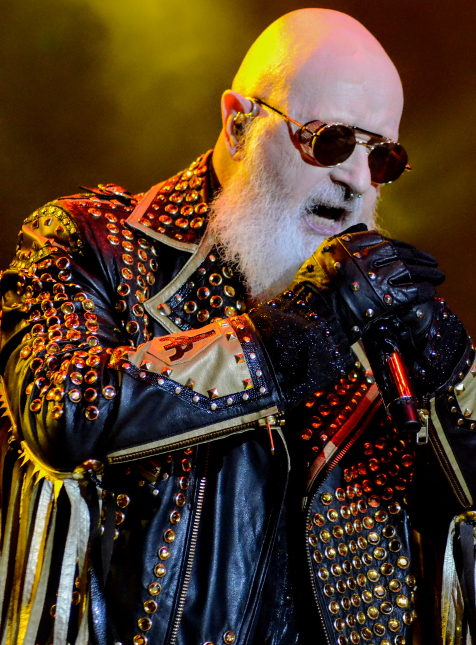