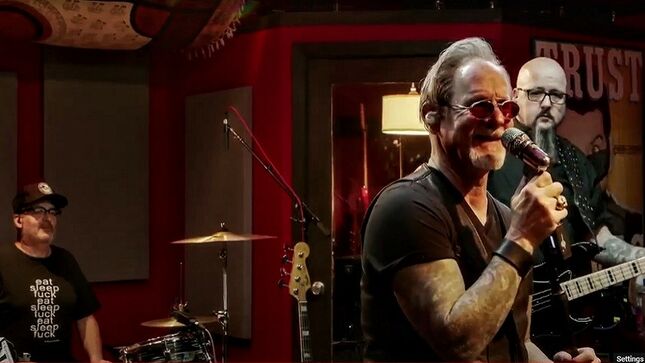 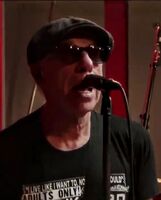 Been a fan since hearing the salacious nursery rhythm lyrics to "Tastes Good To Me", which initially appeared on an Enigma/Restless records compilation, prior to the Cali outfit's debut Name Your Poison EP (cover art depicted as an oversized Trojan prophylactic). At the dawn of the Nineties, the music scene was changing and what appeared to be a band of fun-time, these bikers offered a surprisingly subtle (some would say shockingly sedate), Motown-flavored  eponymous platter that included Aretha Franklin's "Chain Of Fools" as its lead single and also sporting a cover of The Temptations "I Wish It Would Rain". Certainly not the Sunset Strip of a few years earlier, nor the Stones meets Hanoi Rocks stylings of GN’R, who were suddenly all the rage. An opening slot on the KISS stadium tour for Hot In The Shade saw them play to bigger crowds, but apart from a few hard driving tunes, like "Rock N Roll State Of Mind", the auto-erotica of "Drive It Home" and the stripper strutting, disc opener, "Down N Dirty", it was a mismatched audience. The guys sort of drifted away from each other, tried different things (drummer Tom Morris became a "suit," working A&R for one of the big labels, in Los Angeles) before the reunion (Redemption?).

From that debut, fast-forward three decades and most of the key participants still reside within Little Caesar, notably Morris (who missed this performance, due to Covid concerns), soulful voiced frontman Ron Young and guitarist Loren Molinare. The singer might be minus the long curly hair (now short cropped, moussed and gray), but his well tattooed arms are still toned, beneath a motorcycle vest. The matching leather riding pants have been replaced by zoot-suit dress slacks, more in tune with a mature-aged man. Sardined into a studio/rehearsal room, guitars mounted on the red-painted wall, the five ran through the debut, in order, as a number of cameras caught the (re)action(s), the wide angle, placed straight on, only filmed in black and white.

"Down N Dirty" leads things off, an upbeat number that set the mood for album and live shows alike. It is followed by "Hard Times", Young altering the lyric, changing from 25 (as written) to reflect his current age. While most of the guys add backing vocals, throughout the set, the aforementioned Aretha tune ends a cappella, Young and the bassist. The sound steps down, further, for "In Your Arms" dedicated to a fallen fire fighter friend. Prior to the prophetically entitled "From The Start", Young claims it's not been played in 30 years. "Rock N Roll State Of Mind" gets the joint jumping again, followed by the double entendre (car = sex: "Baby, lift your hood. Let me see what's under there!") of "Drive It Home"; an animated Molinare pogos in place.

As he does in-concert, the singer peppers the show with vignettes, recalling the old days or impetus for songs. Case in point, "Midtown", written on the back of a tour bus. Another one left on the shelf for three decades, the jangly tune was probably a decade too early for alt-rock radio success (Think Semisonics' "Closing Time"). Some slide guitar, courtesy of the Molinare's real-life escapade, "Cajun Panther", with its swampy, Southern-rock groove. Song over, the singer laments the current state of music, not being able to play to fans, and wanting to get back out there, saying, "Be safe. Whether you believe in it or not, wear a mask. It's just a fucking mask!" For "Wrong Side Of The Tracks", the guitarist (who probably earned the least amount of screen time, certainly less than the substitute drummer) took two steps to his left, as close as he could get to center stage, in the cramped quarters. Young explains the original idea behind including the Temptations song, but once you hear it, undoubtedly a showcase for his voice, still potent, decades later.

Come the last offering, "Little Queenie", there was some discrepancy between the two original members, as to whether it had ever been performed live. Molinare contradicted the singer, who jokingly surmised that it might have been, before rehab and, "Anything that happened before rehab, then it doesn't exist." Sadly, that was the end of their hour onscreen. Nothing more from the Nineties heyday, nor none of the stellar material off the most recent Eight album, that everyone should check out: Hoping to see them in the clubs, again, soon!