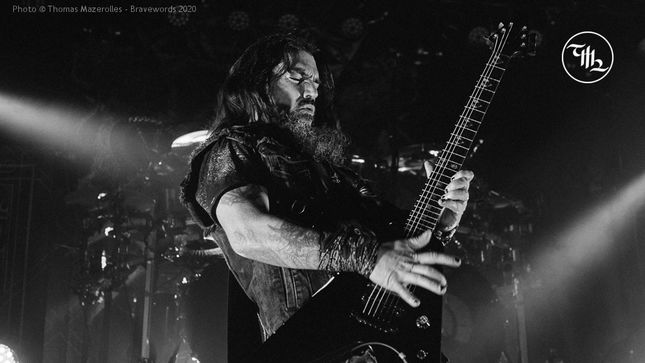 Machine Head were back in Montreal for their Burn Your Eyes 25th anniversary tour. This is very ambitious tour for the band and the fans were extremely excited to spend more than three hours of pure aggression with the musicians in a packed Corona Theatre on February 5.

As soon as Robb Flynn came on stage to play the song “Imperium”, the place went ballistic. Accompanied by Jared MacEachern on bass as well as newcomers Vogg Kieltyka on guitars and drummer Matt Alson, the band played many songs resuming their illustrious career. As expected, the fans created gigantic mosh pits, matching the energy of the songs played by the band. Circle pits were also a regular occurrence during this set and Robb was very pleased by the audience participation. Many hits were played and fans screamed and pushed each other to the rhythm of “Beautiful Mourning”, “I Am Hell” and “Aesthetics Of Hate”. The first crowd surfer appeared during the old classic “From This Day”. This was only the beginning of a great succession of songs that would end the first set. “Ten Ton Hammer” and “Is There Anybody Out There?” were well received by the fans before they generated a huge mosh pit during their cover of Iron Maiden’s “Hallowed Be Thy Name”.

For many bands, this would be the time to ask the crowd to scream so they could come back for the encore, but Robb and Jared were only getting started as they took a well-deserved break before returning to the stage accompanied by original members Logan Mader on guitar and Chris Kontos on drums to perform 1994’s Burn My Eyes album in its entirety. The crowd loved every second of this set and released their aggression during the songs “Davidian”, “Old” and “None But My Own”. Chris was having a blast behind his kit and did not hesitate to include bits of “YYZ” and “Tom Sawyer” in his drum solo. The intensity went to another level when the band played “Death Church” and “I’m Your God Now”. As this was not enough, Robb and company played a great medley of songs that consisted of “Welcome Home (Sanitarium)”, “One”, “Fast As A Shark”, “Balls To The Wall”, “Strike Of The Beast”, “South Of Heaven” and “Raining Blood” before ending this 3-plus hour set with the song “Block”.

As expected, the night was a huge success and it was contagious to see the musicians enjoying themselves so much on stage that it did not matter if they broke the curfew in order to play all the songs they intended to. Fans had a blast throughout the night and some even wished they played even longer! This is how you celebrate an album and other bands should take notes on how it is done!