MERCYFUL FATE - Doomed By The Living Dead In Cincy! 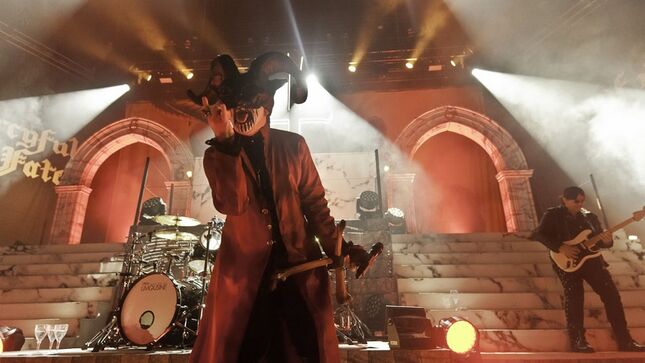 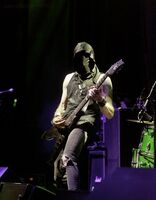 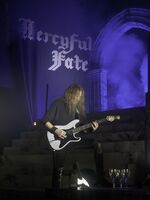 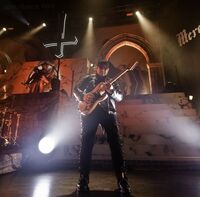 Mercyful Fate brought their special brand of the dark arts to the sold out Andrew Brady Center in Cincinnati on November 4, bringing in tow Teutonic thrash legends Kreator, and Cleveland, Ohio natives Midnight. The Brady Center was about 70% filled for Midnight’s set, surprisingly high given the 7:00 PM start time. I was previously unfamiliar with the music of this three-piece. They emerged with their heads and faces covered in hoods, and I’ll admit when I see unknown bands with what appears to a gimmick, I’m usually thinking the worst musically, but they really delivered a great set of riffing thrash metal. Maybe those in attendance were more familiar them than I, but Midnight garnered a great reception, and I noted more than a few in attendance walking out with Midnight’s Let There Be Witchery on vinyl, usually a good sign of a winning presentation. I read where they’ve been around since 2011, so it appears I need to get with the program. They breezed through their eight song set in about forty minutes.

Kreator’s stage set consisted of the backdrop of their artwork for their 2022 release Hate Uber Alles, together with bodies hanging along the back of the stage from the ceiling. I’d not seen Kreator since 2013 in Columbus when they headlined the sadly defunct Al Rosa Villa. They have not missed a beat in the nine years since I’d last seen them. In other words, they are tight as hell, and you’d never know they were an opening band. They played very much like a headliner, including some humor, albeit with an abbreviated set. We even got a joke from Mille Petrozza asking the mosh pit “that’s not there” to scream (the Brady Center is seated.)

As we all should know, Kreator released Hate Uber Alles this year, and it rivals anything they’ve done in terms of anger and aggressiveness. It will be in my top 20. They weaved in two selections from Hate Uber Alles – “Strongest Of The Strong” and the title track – which are not out of place in their catalog. Mille said they will be returning to the U.S. on a 2023 headline run, so hopefully we can hear more live from the new one in 2023. New on stage is bassist Frederic Leclercq who is more active on stage than his predecessor.

Down comes the black Mercyful Fate curtain hiding the elaborate stage lurking behind. It really serves to heighten the anticipation. Waiting. And some more waiting. Then the curtain falls down, is swept away, and King Diamond emerges from an entry on top of the riser on the stage, while Hank Shermann, with baseball cap and sun glasses, stands on the stairway steps stage left, drummer Bjarne Holm behind the kit on the stage while the massive structure is behind him, Mike Wead (who is also in King’s solo band) is stage right, as is newcomer bassist Becky Baldwin.

I never thought I’d actually get to see Mercyful Fate live. To say they are one of the foundations of heavy metal would be an understatement. There are certain bands which are iconic in our genre of music – Sabbath/Ozzy, Metallica, Maiden, Priest, Slayer, Motörhead, and I’d add Mercyful Fate to that group. I remember reading a review of Metallica’s Garage, Inc. years ago in which the knucklehead reviewer questioned why Metallica would ever cover a medley of Mercyful Fate songs. This only served to prove that some reviewers should stay in their lanes.

From the opening bars of “The Oath”, King is in full control, and works not only the crowd, but the stage. Theatrical? Yes. But he delivers the vocal prowess and range with a character that is distinctively his, and like his colleagues Halford and Dickinson, serves the music with such personality that he has, like them, earned the distinction of “front man.” He is the complete package.

Most of the set came from Melissa and Don’t Break the Oath, but they also went older with “A Corpse Without Soul” and “Doomed By the Living Dead”, and introduced newer material (like really new) with the “Jackal Of Salzburg”, which is scheduled to be on their upcoming release. King said they were still working on the song, and they have it down to nine minutes (music to the ears of photographers in the pit.)

Becky Baldwin fits in like a hand in a glove, though King did push her from the back one time as he was leaving the stage, basically telling her to go to the front of the stage and stop hanging towards the back. Shermann is a bit understated on stage, but he handles most of the leads. By the time they got to “Black Funeral” and “Evil”, King was alternating verses with the crowd, not to rest his voice, but he seemed a little shocked that the crowd knew every lyric and seemed to be soaking up the moment.

After the encore “Satan’s Fall”, the band passes out the obligatory merchandise, and King is the last to leave the stage, still working the crowd, and signing some autographs, including a fellow photographer whose day job is a tattoo artist, who messaged him that if he signed her arm, she would tattoo his signature on her arm.

If you have the chance, don’t miss this tour. With two lengthy hiatuses, Mercyful Fate is a music unicorn which very well may come around again to these shores, but why take the chance? If you are reading this you are not a boneheaded music reviewer. You won’t be disappointed.

Mercyful Fate setlist:
“The Oath”
“A Corpse Without Soul”
“The Jackal Of Salzburg”
“Curse Of The Pharaohs”
“A Dangerous Meeting”
“Doomed By The Living Dead”
“Melissa”
“Black Funeral”
“Evil”
“Come To The Sabbath”
“Satan’s Fall”