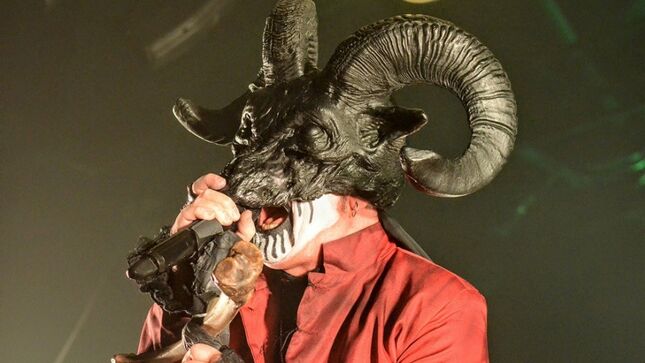 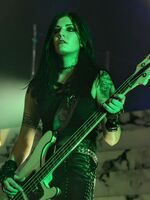 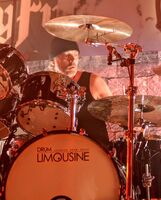 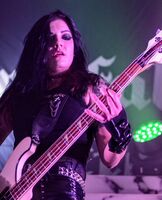 First gig in the City Of Brotherly Love since a stop at the Trocadero, back in '99. Wow! Band obscured by a curtain, once it dropped, a two tier stage was visible, an inverted crucifix prominently hanging center stage. King Diamond, in floor length cassock, face shielded behind a horned ram's head mask, stood on the balcony (accessible by "marble" staircases, either side of Bjarne Holm's minimalist, floor level drum kit). During "The Oath", he works his way to the lip of the stage. When not yelping out falsetto "oh, oh", he's playing air guitar on his makeshift mic stand, made of crossed human bones. Mike Wead is spotlighted for the solo on this one. Speaking of being alone, on the other side is Hank Sherman, in backwards baseball cap and leather jacket. He cranks out the beginning flourish to "Corpse Without A Soul", and later, the guitar tandem gathers center stage. This one gives King's upper register a severe workout, his head still encased in the plastic goat head (from the nose up). He'd lose the prop for the next song, a hazy green filtered "The Jackal Of Salzburg", the lone new piece aired: lengthy and generally slow crawler. It also ends rather undramatic, with repeated tolling otherwise, it was wall-to-wall ‘80s nostalgia.

Upon his return, the singer is decorated in an elaborate, pointed hairstyle, somewhere between a crown (fit for a King!) or a series of church steeples (also somewhat apropos). Gold/copper bathed, the classic twin lead introduced "Curse Of The Pharaohs" reignites the love fest. By speedy "A Dangerous Meeting" the fans are not only mimicking the falsetto notes, but singing the, "They're gonna get themselves killed" chorus. Hard to imagine, back in '84, when I saw Mercyful Fate accompany Exciter and Motörhead to the Variety Theater (an evening when Lemmy & Co literally brought the house down, the plaster crumbling/falling from the ceiling, prematurely ending the show) that almost four decades later, this band would be performing many of the same songs and still be an international headliner. King announced that they're enjoying playing the old tunes. "It rekindles an old energy and we're going to continue it from now on." Great news! 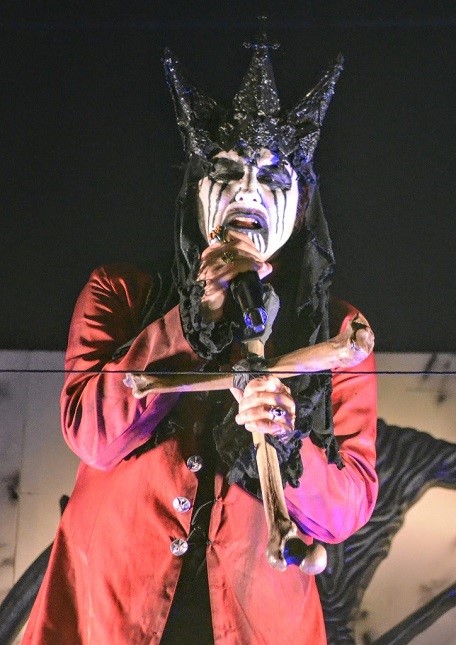 It's proper band member introductions before "Doomed By The Living Dead", including temporary fill-in four-stringer Becky Bass (subbing for Joey Vera, on tour with his "other" band, Armored Saint). She didn't look out of place, the entire night, dutifully headbanging, yet staying out of the limelight. Sherman seemed a little uncomfortable with the platitudes and actually began the song before King gushed any future praise. "Say goodbye to all your fucking angels" comes the popular refrain from the crowd. One of the few Mercyful Fate songs with actual curse words (no airing of "Nuns Have No Fun" though). Bit of a lull, prior to the two guitarists squaring off (under a crimson haze) introducing "Melissa", which sees King (now in black cassock, having retired the earlier red garment) retreat to the "penthouse" overlook once again. Streaks from white headlights punctuate the otherwise monochrome environs. No throat problems on this tour, despite the seemingly torturous range needed to pull off the likes of "Melissa". No rest for his pipes on "Black Funeral", which follows, although King does motion for the fans to join in, come the chorus. During which, the entire spectrum of flashing lights are employed: red, blue, green, purple. Comical, non-metal moment of the evening, when King noticed a cat banner a fan had hanging from the balcony. "I like cats, but what is that doing in here?" He shrugs to the throng, "Very cute," then back to the show.

More crowd participation (at King's insistence) for "Evil", Sherman venturing to the opposite side of the stage, to kick that one off. At times on the dimly lit (or brightly backlit) stage, seemingly constantly shrouded in a misty haze, the players were hard to see. Wead and Sherman trade leads throughout. Greens and purples herald "Come To The Sabbath", which finishes the proper set. Only because he has a microphone (and shrill range) can you hear King above the boisterous sing along. Great to be amongst so many like-minded fans, young and old. As the night began, King is aloft, the two guitarists down below, front & center. Lights on, the overhead cross illuminated, the band leaves the stage, eventually to return, for mammoth “Satan's Fall". "I waited 23 years to come back here, with Mercyful Fate," said King, "So you deserve an extra song and it won't be a short one." Let's hope he's true to his word and comes back before another two decades!

"Violent Revolution" is not only a great start to a Kreator gig, but sort of a mantra for what unfolds in the audience. Compressed smoke repeatedly erupts skyward, from several pores around the stage. At the sides of the stage, spear impaled figurines stand sentry. Mic hung overhead, ala Lemmy, mainstay Mille Petrozza never moves too far off his center stage mark, but when he does venture away, he often plays from a hunched position or lifts/plays his guitar overhead, then adds some flashy histrionics. Truthfully, the Germans have never been about putting on a show. It's about bludgeoning, with blazing thrash. That said, new bassist Frédéric Leclercq (ex-Dragonforce) does motor about. Strobes following the kick drums, bathed in red and a copious layer of fog, "Hate Über Alles" (just one of two, from the album of the same name) leads into a similarly crimson draped "Satan Is Real". Can there be any other color choice?

Pains me to say, but got the impression that much of the crowd had no idea about Kreator, apart from the classics. Petrozza attempted to get a Wall Of Death and numerous circle pits going, with varying degrees of success, although the crowd surfing and moshing was pretty much relentless. Almost only white lights for its duration, great to see "Enemy Of God" in the set. Still my favorite Kreator platter of the last 20 years. A short pre-recorded respite ("Mars Mantra") mid-set, drummer Ventor gets the crowd clapping along, prior to the band returning to the stage and revving back up, via "Phantom Antichrist", which showcases a moment where the three stringed instruments are side-by-side, stage left. Hand to his ear, imploring the crowd for more noise, Mille has his guitar slung over his back, headstock pointed towards the ground. Hoisted overhead, he produces the namesake prop for "Flag Of Hate". Only one song can end the night, a savage run-through of "Pleasure To Kill", the frontman barking the lyrics in quickly snapped phrases. As the song wound down, Petrozza again summoned a Wall Of Death. Mille announced they plan to return stateside next summer for a headlining tour!

Cleveland's musical terrorists, Midnight, opened the show. The trio was shoehorned into the stage, limited by the pre-positioned setup for the other two acts. No matter. If they couldn't move side-to-side, then they'd go up, climbing the stack of amplifiers. Actually, guitarist Commandor Vanok (stage left) was his usual bundle of energy, playing from his knees, while laying down tasty riffs, which pierced the otherwise rumbling din. Separated by the centrally located drum kit, opposite end of the stage saw bullet belted singer/founder Athenar, armed with his bass and a rambunctious streak. Red lit "Szex Witchery" preceded a slowed down "Here Comes Sweet Death". Nice to know it's not insanity, all the time. Asymmetrical red floodlights crisscrossed the stage, during "Evil Like A Knife". At one point the mainman attempted to get on the good side of the Philly faithful, yelling "Go Birds!" (Colloquial reference to the local football team, playing that night, elsewhere in the city). It was not his only regional cultural reference, claiming "You can get that in any Wawa (convenience store chain)," to introduce "Lust, Filth & Sleaze", where all Hell is unleashed. Beneath green lights, Vanik runs around the place and throughout the song, a barely-dressed go-go dancer bumps, grinds & gyrates her way across the stage. A swirl of purple and green illumination pulsates during the concluding "You Can't Stop Steel", Athenar and Vanik finally able to flip-flop their respective stage locale. Few bands whip up a frenzy like Midnight! Best to experience it live.

After the pandemic waiting game, where every band wants to get back on the road, let's hope there are more strong packages, top-to-bottom, like this one.