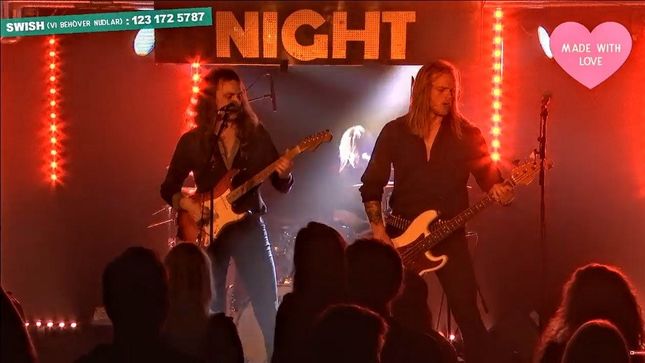 While much of North America relished in the return of an autumnal ritual: college football Saturdays, opted, instead, to tune in the record release party for Night, an (unfortunately) still not-too-well-known outfit. Seemed apt, as it was originally scheduled as ProgPower USA weekend, a festival that helps increase the Stateside profile of overseas acts. Perhaps the Swedes will have an opportunity to play the Atlanta confab one day (hint, hint).Their fourth album, High Tides - Distant Skies, (The Sign Records) hit the street just the day before the Linköping appearance. Even with a sparsely attended, social distancing event, the hometown crowd doesn't realize how lucky they have it. Here in New Jersey, it was only on September 1st that restaurants, bars, theaters/live venues were allowed to take reopen (after a six month lockdown), and then, restricted to just 25% occupancy. Needless to say, there's not many in-person options. So, to the Net... 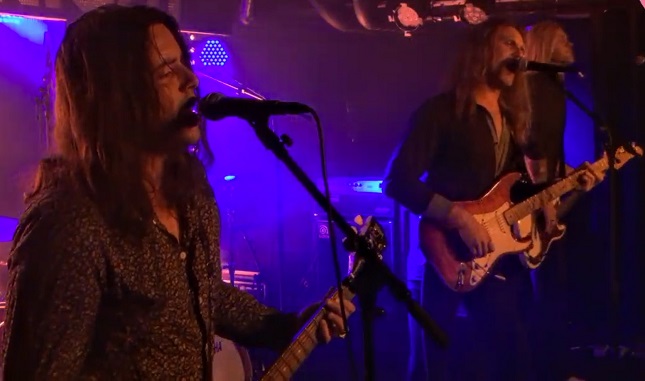 Decidedly low budget affair (three cameras and 720 resolution, max), on what appeared to be a casino lounge or cruise-size stage. The purple/pink lights and copious shroud of stage smoke not only obscured drummer Linus Fritzson, but played havoc with the digital transmission, threatening to pixelate everything. Still the music shone through the videographer's questionable presentation (main camera trained on stationary shot, showing bodies of audience members, instead of a tight focus onstage. Then, come a solo or twin leads, opting to slowly zoom from the back of the room, but by the time a two-shot was in focus, the moment had passed and the musicians moved to a new locale. Opened with a pair of newbies: "Burning Sky", followed by "Under The Moonlight Sky". The latter is punctuated by Oskar Andersson's (he of the guitar and lead mic) falsetto. A rumble of bass (courtesy of Joseph Max, much more a presence, than the Muskelrock gig, back in May, especially talking to the audience, between songs) gives way to twin picking guitars to start "Shadow Gold". 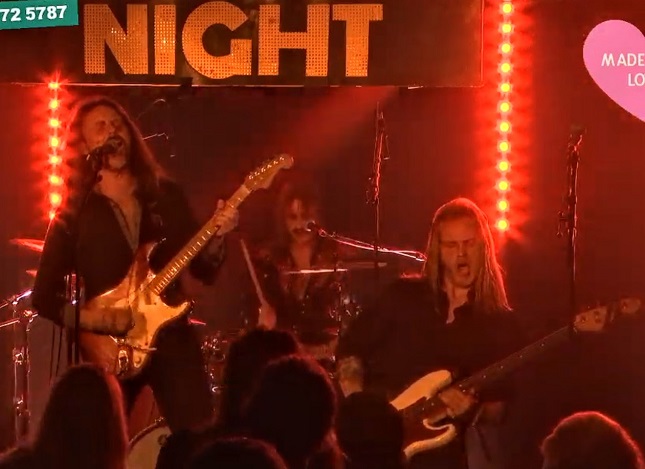 "Here On My Own" has Linus (quite the character), on backing vocals. Speaking of voices, lead guitarist Sammy Ouirra continues to develop a more prominent role behind the mic, beginning with "Feeling It Everywhere", the first of three lead vocal slots during their 65 minutes onstage. Crowd pleasing "Surrender" (off the glorious 2017 release Raft Of The World) ends with Ouirra, stage right and Max, stage left, both genuflecting, as Andersson remains the only upright member, as the strobes go crazy. "Falling In The Black" is backed with Sammy's second singing stint. Highly charged "Running Away" is bathed in orange and the omnipresent fog. In fact, it looks like the recent wildfire photos of the Cali skyline. Hey, I love seeing a smoke filled room, but when it detracts from the band... Eventually, the emphysema suffers in the crowd appear to have won out (or someone just told the pyro/fog guy, "Cut it out!"), as the haze dissipates (and the picture quality improves), just in time for "Winds". 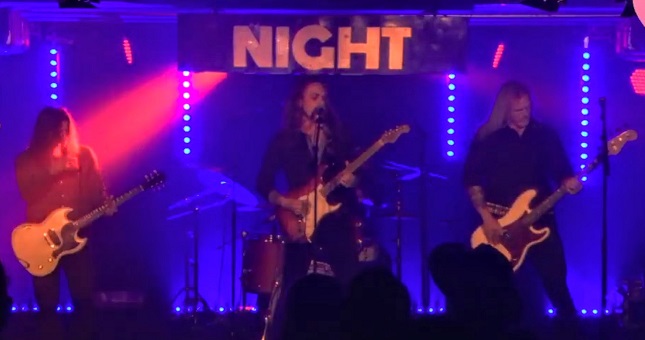 Oskar plays second fiddle (OK, it was an acoustic guitar) but moves to the far wings of stage left to allow a centrally located guest guitarist tear through jangly "Crimson Past" with Ouirra (Sammy again out front with lyrics). "Time" closes the proper set, at the hour mark, but there's a pending encore. They return for head bobbing rhythm of "Gunpowder Treason", which recounts the Guy Fawkes plot, in UK history. There are synchronized stage moves and guitar raises. Don't know about gunpowder, but they certainly end by emptying the entire remnants in the fog canister and a storm of strobes. Quite the conclusion of this Night time! 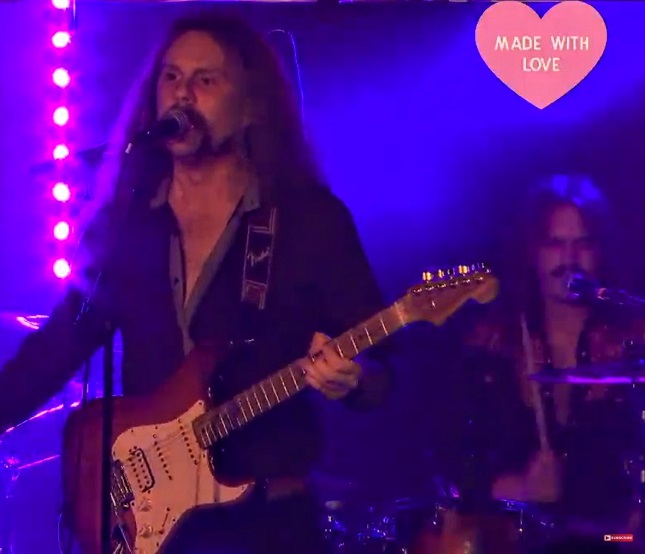 Don't be blinded by the smokescreen. Check out Night, one of the bands spearheading the future of the music we love.