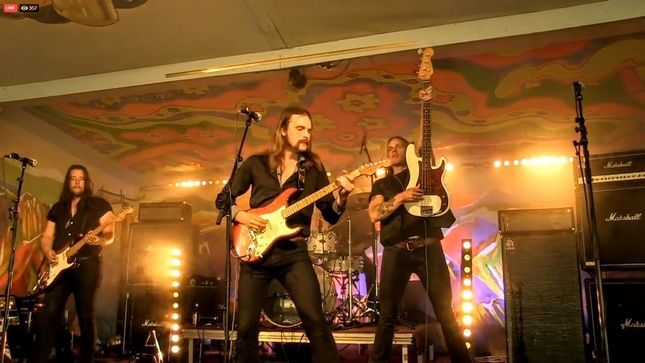 Couldn't wait to finally see Night, live! Been a long time since I anticipated a "concert" this much, and, at this point, can only imagine the first post-Corona live experience matching that level. While there have been a ton of lockdown livestreams, not all of them were bands of which I'd consider myself a fan. It was something to do, to kill time on the weekends and/or provide a report, to you, the readers of BraveWords.com. Sure, grew up (and still support) the classic old guard of Priest, Maiden, Scorps and Saxon, as well as their heavier offspring: Overkill, Destruction, etc. Have embraced the new global kings, as well: Sabaton, Behemoth, Nightwish, Amon Amarth, but my real focus these days (now more so than ever) is discovering newer bands and helping watch them rise. Someone like Night Demon. Have been following Night since the debut and despite three or four European trips a year, still have yet to witness the Swedes onstage. That all changed, today.

Muskelrock is a boutique Swedish festival (put on by the guys in Bullet), catering to a smaller (rabid) crowd and fledgling bands who might only make the lower rung of the giant, continental gatherings. However, this year (with the Covid-19 situation), they opted to house a multi-course, seated, dinner party, for a few select fans. Seats were provided (and must be maintained throughout) via auction, guaranteeing the handful of attendees (rumored to be 25 paying customers) a (suddenly rare) opportunity to witness a live show and a three course meal (onstage and off). During the changeovers, food/drink were served, but the real entree was provided by locals, Night and Ambush. 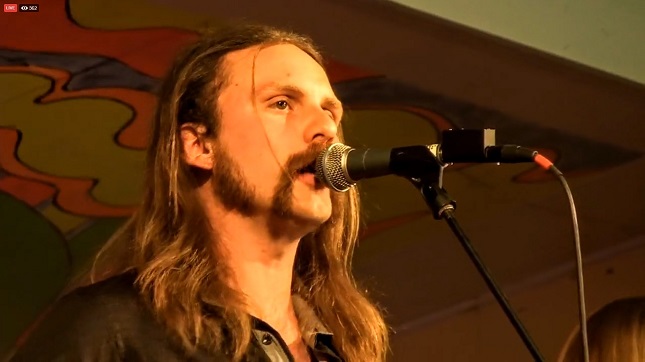 To my pleasant surprise, Night opted, almost exclusively, for Raft Of The World material (an album which made #2 on my best of 2017 year end list), despite having a full album, High Tides Distant Skies, set for release this summer. There were some technical issues with the broadcast: starting late and losing the entire feed during the "Surrender" finale. That was nowhere as disappointing as the "director's" decisions for the multiple camera shoot. First off, the point-of-view from behind the drummer offers nothing but the back of his head and should be cycled through maybe one or twice a song, not every 30 seconds, particularly at the expense of what was happening at the front of the stage. Hey, you're not making a video, don't need to rapid cut every couple of seconds and focus tightly on fingers plucking strings. Capture the moment for those not there. When they're a trio across the front, stick with that shot (from the band's left, unencumbered by a sea of mic stands). Minor complaints, since it's about the music, but if I can envision this, sitting at home, someone witnessing it live (and making the decisions as to what/when/where goes on air) should be able to see it too.

After an introduction by Hällas bassist/vocalist Tommy Alexandersson, the guys walked on, plugged and kicked off with "Where Silence Awaits". Mustachio adorned guitarist Oskar Andersson handles most of the vocals, although occasionally backed by fellow six-stringer Sammy Ouirra and ubiquitous drummer Linus Fritzson (also a member of Ambush), as on the "Under The Moonlight Sky" follow-up. It was the lone, as yet unreleased, number offered, slotting nicely amongst the other twin guitar hard rockers. A drum roll kicks off "Kings Of The Night", B-side of the pre-release, non-album single that would also be part of the set. Live renditions of the sometimes poppy newbies prove to be bona fide rockers, with easy, sing-along choruses. A false ending comes and goes, right into "Under The Gallows", where blond bassist Joseph Max really gets into. Not much interaction with the table-bound crowd. What there is, is conducted in Swedish. So it's a quick sip of beer ("Skol") and time for an older tune, the restrained, but more traditional metal constructed "Gunpowder Treason", which revolves around the Guy Fawkes episode of British history (trying to blow up Parliament!), even utilizing the lyric: "Remember the Fifth of November". Max goofs around, showing “rabbit ears" behind singer Andersson's head, as the latter takes a spin on the walkway/gangplank that juts out from the small stage. The eatery/bar/tables are all under the cover of what was once a giant merry-go-round, the amusement long departed, but the artwork (especially on the canopy ceiling) still intact. 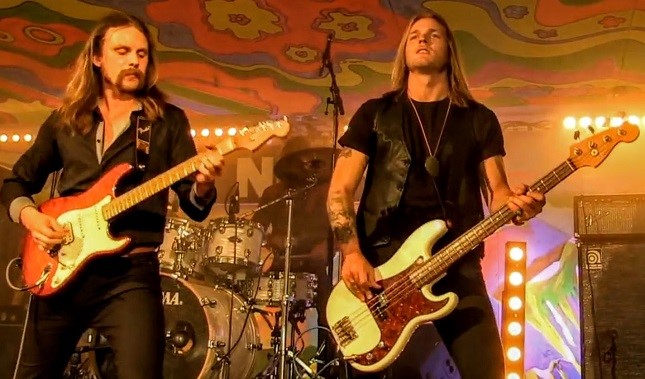 Open chord riffing, courtesy of Ouirra, opens a more aggressive "Fire Across The Sky", which ultimately segues, seamlessly, into "Time". It's three across the stage for the aforementioned "Feeling It Everywhere" single, Ouirra handling lead vocals. Other than the jangly guitar intro, the almost danceable, retro-disco edge, so apparent on the studio version, is nowhere to be found. Have the distinct feeling this was the first time he's sung the song publicly. While catchy "Surrender" capped the day (begun just after noon, on the eastern coast of North America, and 6 PM locally), it ended prematurely, with the Net stream failing, mid-song. Sadly the band didn't get to acknowledge the fans nor the event. Still, for internationally starved viewers, like myself, even a deflated soufflé was a 5 star Michelin meal. Can't wait for a second helping! 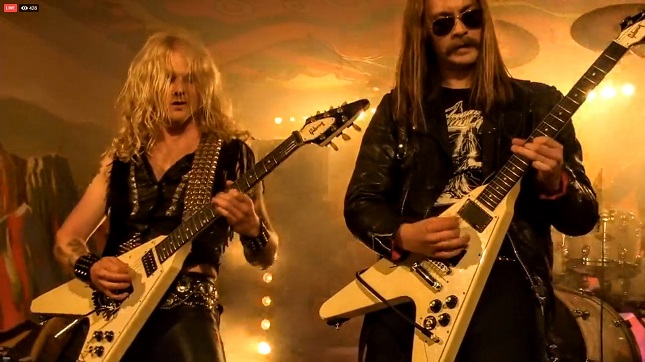 Couple hours later, checked back in with Ambush. Two of the Night guys are still there, drummer and Andersson having traded his guitar, for bass, and backing vocals, with Ambush. In a post-gig interview, the pair don't see any conflict of interest, the two acts planning on touring together. Musically, Ambush are a straight ahead metal outfit, plenty of Judas Priest and Accept influences, albeit with Oskar Jacobsson's piercing high vocals. Fog filled the stage, from the start, and the crowd not only stood (obscuring the view from the head-on camera), but come the latter half of the show, were shoulder-to-shoulder (Oh, to be in Sweden!), at the end of the gangplank. 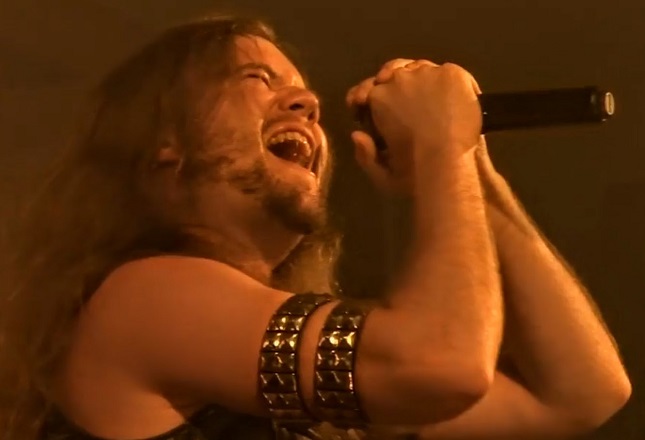 Plenty of twin leads, side-to-side stage movements and up/down guitar thrusts. Jacobsson frequently ventures off the stage and down the catwalk, close enough to slap fans' hands, but he dares not. By "Possessed By Evil", all natural lighting has been extinguished, the stage thick in fog, and a little dim. Afterwards, a hooded, robed figure (could be Death, apart from the blond hair poking out) wields a pump bottle of hand sanitizer. He dispenses a full shot glass to each of the band members, although the singer takes his swig from the bottle itself. Cue, "The Demon Within". A slower, chugging "Heart Of Stone" sees the "Director" opt for double/triple exposures for those of us at home, multiple camera images superimposed atop one another. The headbanging, fist thrusting speedster "Iron Helm Of War" ups the pace. As someone lays heavily on the "smoke" button again. Some Accept ("Princess Of The Dawn") riffs, as the four across the stage swivel hips, left-to-right. Jacobsson delivers the infectious chorus to "Natural Born Killers" at the end of the catwalk. 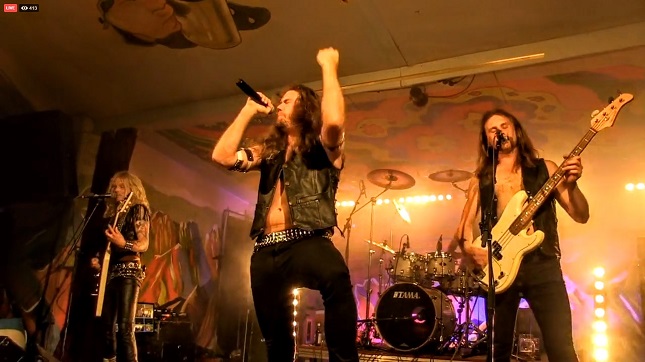 Next, another interlude, but this with a yodeling soundtrack, as a German waiter, in leather pants, provides the band with beer-filled steins. Surely tastes better than the earlier "treat." Back to the speed, courtesy of "Desecrator". More synchronized moves, in triplicate, as the singer plays directly into the cameras, although the "Director?" missed it all, more enamored with a protracted view of the back of the drummer's head. Very Judas Priest-ish "Hellbiter" was announced as the last song, but once completed, the two guitarists step center stage for "Don't Shoot (Let 'Em Burn)". However, once again, the video falters before Ambush are finished.

Great show, thanks for sharing! Hopefully more than just the converted will now check 'em out.