NIGHTWISH - Kick Out The Jams, Muthas! 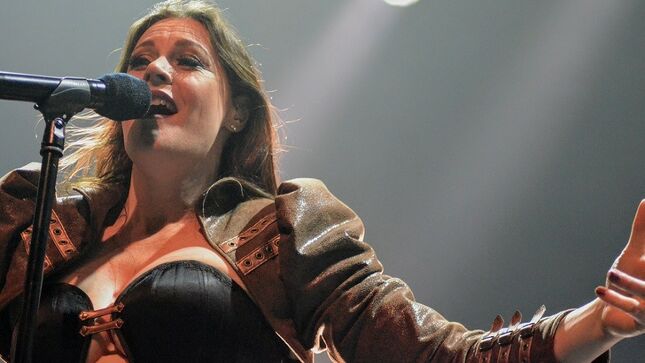 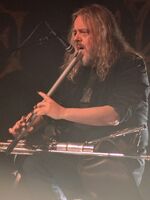 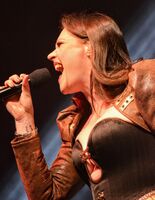 Mother's Day is about family and there were more than a few Moms & Dads with their kids in attendance, as well as some Suomi hockey jersey wearing expatriates. Having seen the Finnish outfit in several countries, on three continents (granted the band is on their third singer, three bassists and two drummers, plus adding a British piper, since we first met, although management has remained consistent), couldn't think of a more fitting celebration than reconvening, post-pandemic, at the sold out (2850 capacity) Terminal 5, in NYC.

While he tested negative, mainman Tuomas Holopainen skipped the paid VIP meet & greet, so he could play the show. Sure even the most disappointed fan would probably consider that a worthy trade-off. Same running order as earlier this spring, in Helsinki, kicking off with a white spotlighted drum intro, courtesy of Kai Hahto. When the rest of the band enters the darkened stage, there's the towering Floor Jansen in a double bandoleer ruffle hemmed dress, thigh high garters and some sort of slinky, sleeve-corset contraption. Composer/ keyboardist Holopainen is no longer shoehorned into the corner of the stage, but centrally located (and on a riser), a more traditional drum kit location, for rock concerts. Sorry ladies, it's now gonna take a Major League arm to hurl your undergarments his way. The array of keys is rather understated, compared to the fortress behind which he barricaded himself, on previous tours. The only other original member, dapperly attired in dress jacket, guitarist Emppu Vuorinen, had his hair pulled back, in a ponytail, as he crisscrossed the stage. Ultimately, re-establishing his stage-left realm, he positioned himself, legs splayed. Occasionally he's backed by Troy Donockley, who, when not playing an assortment of woodwinds, lends a hand with stringed instruments, including second guitar duties. 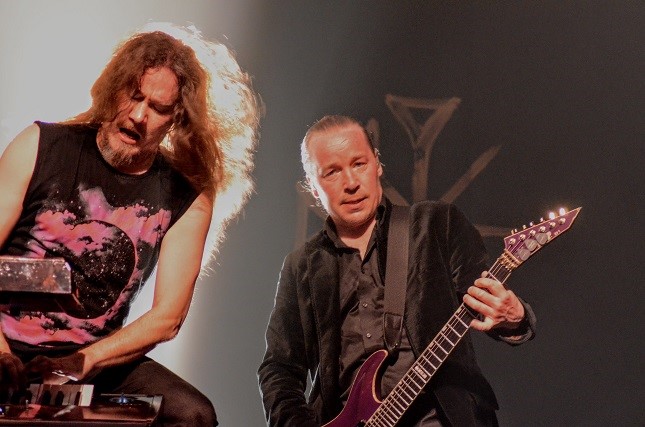 During the opening "Noise" (the new composition a diatribe against digital zombies, those who "live" on/through screens, as opposed to most of tonight's crowd, who came out, to interact with reality and experience live music), a smiling Jansen dances around her center stage mic. During the night, she'd occasionally strike a punctuating (Freddie Mercury) pose, right arm outstretched, fist/mic overhead. As such, couldn't help but recall another statuesque woman, nearby, standing guard in the NYC/NJ harbor. Such is the status of a band like Nightwish that they can not only open with a new number (instead of the usual, rousing fan favorite), but two of the first three (and three of the first five) are culled from the most recent (albeit 2020) release, Human. :II: Nature.

After addressing the assemblage, green stained "Planet Hell" sees Jansen playing cheerleader, getting audience to clap along. Holopainen pulls a couple of faces during its reign, although not during the mini solo he wrote for himself. During said interlude, it's heads down, face buried in the keys. "Tribal" adds a different (dare I say Middle Eastern) vibe: gritty, staccato, almost industrial, yet with Donockley's pipes crying throughout. Strobes flash and Jansen lashes the air with her lengthy mane, swaying side to side. Purple and red illuminated "Élan" becomes an audience sing-along (the first of many). As Floor slinks around, seductively, Donockley's pipes add a haunting accent. Initially under green light, "Storytime" the purple highlighted syncopated banger sees the guitarist venture to the stage opposite and then visit his keyboard friend, once more. 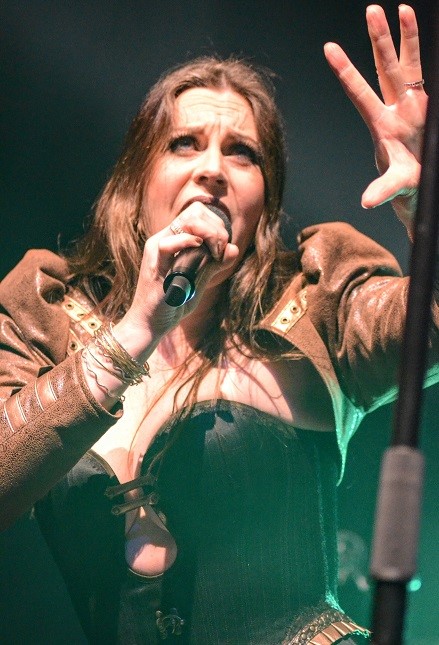 "She's My Sin" (one of several old school Wishes still in the setlist) begins with Emppu next to Tuomas, at the back of the stage. Most of the night, the diminutive, blond axeman is located near the lip of the stage, foot up on the wedge monitor. The crowd chants, in time, to the speedy melody. Orange lit "Harvest" is introduced by drums. Jansen is seated next to the piper, who takes a prominent vocal role on this one, essentially a duet between the two. As the pace enlivens, breaking into a Celtic flavored jam, Floor exits.

Floor describes "7 Days To The Wolves" as, "One of my personal favorites." Drenched under red lights, Emppu and newboy, bassist Jukka Koskinen swap sides, left for right, and vice versa. Without prompting, the crowd spontaneously claps along, as Jansen, bent at the waist, violently pinwheels her hair, like some high energy, heavy metal aerobics workout. Once more, she exits the stage, as it goes blue for "Dark Chest Of Wonders". Upon her return, she's the focal point, under white spotlight, the others still dark, despite never having seen the actual movie, get a Titanic image: Floor, arms outstretched, hair billowing, courtesy of electric fan. A cascade of purple and white zig zags across the stage. 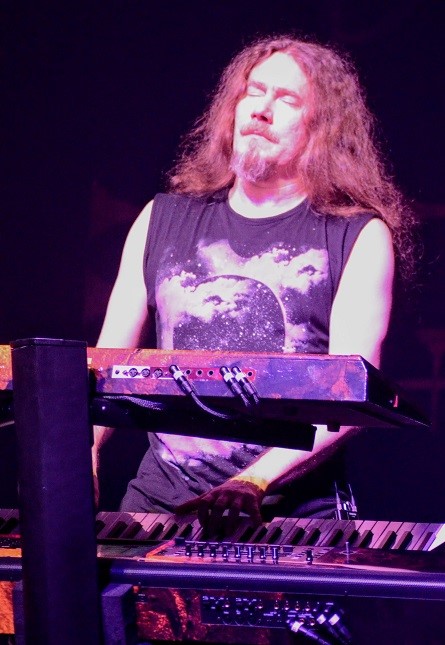 "I Want My Tears Back" is almost a hillbilly hoedown, Jansen scoots and square dances, playfully nearly knocking the guitarist offstage, in her wake. Flashes of the Amazonian actress Lucy Lawless (Xena, Warrior Princess, on ‘90s television) come to mind. To start, "Ever Dream" is only Floor and Tuomas, both in separate white spotlights. Eventually the band kicks in, full blast. Amid the blue/purple haze, Emppu is spotlighted, stagefront. As the song builds to crescendo, a storm of strobes are unleashed. Prior to "Nemo", Troy takes to the mic and recounts a recent conversation with the band's (booking) agent, who asked, "Why aren't Nightwish more popular in USA? Their songs are too long and they play weird instruments!" The piper had a chuckle about the answer. The blue(fish?) tinged favorite sees Donockley pull double duty, guitar draped around his neck, alternating with blowing into his penny whistle/recorder. Jansen's vocal sustain, on the concluding note ("forever more") is amazing.

Jansen and the cross-legged piper, trading his arsenal for an acoustic guitar, are seated on an otherwise empty stage, for a folk music duet, on "How's The Heart?" Hard to imagine that such a boisterous NYC crowd can remain respectfully silent for its duration. Only in the last quarter, when the delivery intensifies, does the rest of the band join it, but only sporadically, and subtlety. "Shoemaker" feels like a couple of different songs, beginning as something of a duet, between Jansen and Donockley, but ending glorious, as an operatic aria showpiece for Floor. Backlit by a single white light, on an otherwise dark stage. Tarja who? Stunning! Commencing "Last Ride Of The Day", a broad smile across her face, Jansen continues her hair spinning workout, basically skipping around a stage blasted with streaks of purple and pulsating strobes.

The final half hour is composed of just two tracks. In a hail of intense (so much so they brighten the whole stage) intersecting white lights, that seemingly all lead to Holopainen, bombastic "Ghost Love Score" begins. The rays are choreographed to the music of his keys and Hahto's drum play-along. When she re-emerges, Jansen has lost the sleeves, displaying her well-tattooed limbs. The lengthy, emotional hymn continues under orange hues. Then Vuorinen and his purple guitar have a moment to shine, before the stage goes dark. There's still music, although just keyboard/playback, before the entire band returns to the stage, for the triumphant finale. Hitting the last operatic high, Jansen mouths "Thank you" to the crowd, then walks over and takes Emppu by the hand, before she and Tuomas madly headbang.

Until tonight, never really understood the need to play mammoth length "The Greatest Show On Earth", in whole, or just portions of the multi-part construct. Well, after beginning with spotlighted Tuomas on a blackened stage, he's joined by piper Troy and ultimately, keeping with the history of live rock, "Chapter I: Four Point Six" gives the musicians a chance to really play together: a full-on ‘70s style jam without the annoying trappings of such. So it demonstrates their individual abilities, as well as provides an all-important (culminating) moment to get loose, together. All for morale and "team" unity, especially given the (rumored) lack of cohesiveness with past singers. This one's for the band, as much as the fans.