Images And Words By Joel Barrios 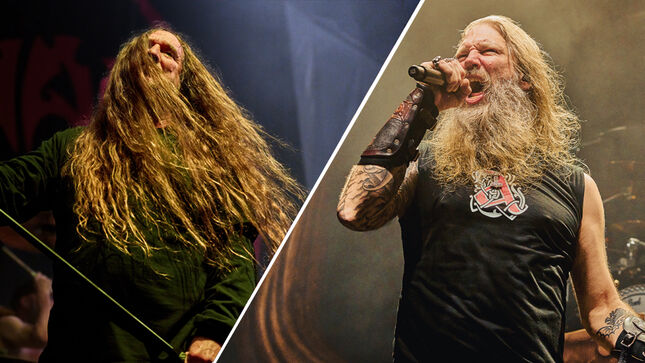 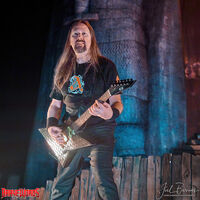 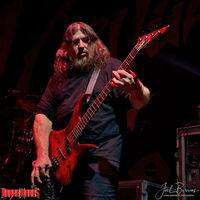 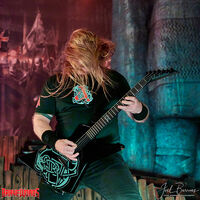 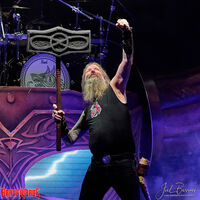 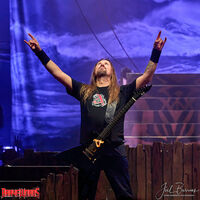 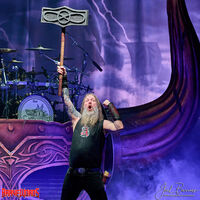 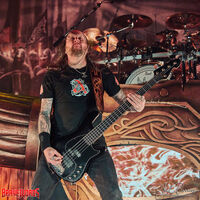 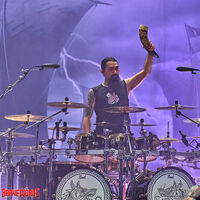 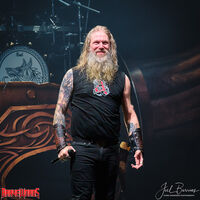 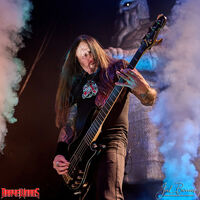 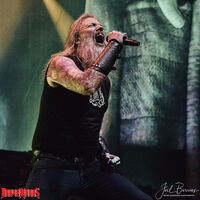 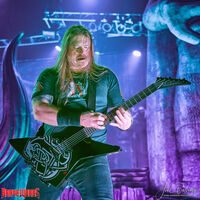 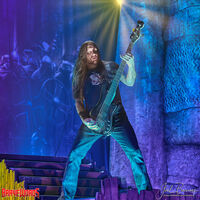 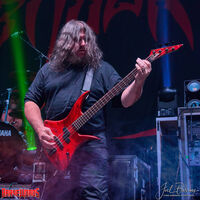 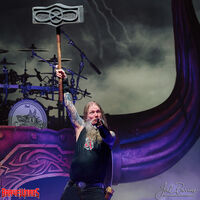 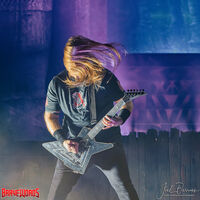 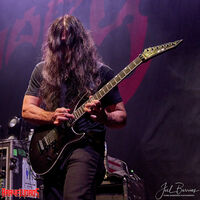 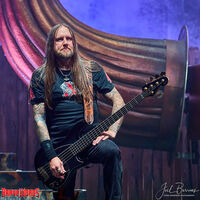 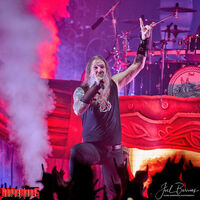 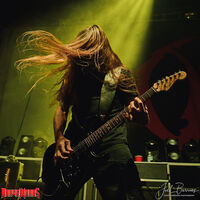 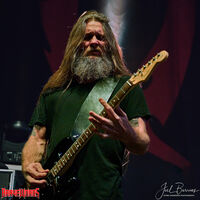 Brutality and accessibility might seem like mutually exclusive concepts, the latter of which borders on antithetical to the concept of death metal. Yet with the passage of time, what was once considered to be the extreme fringe of tolerable auditory aggression in metal circles during the 1980s and 90s (let alone what would be considered acceptable in “polite” society) has amassed a sizable and highly avid following. Though what passes for extreme metal circles in this present day and age seems a far cry from the raw, primal sounds that shaped the Florida, Stockholm, Gothenburg scenes and beyond, the older guard definitely still has something to teach the current generation regarding the finer points of uncompromising, sonic carnage. In the all too appropriate throes of autumn, on November 19th no less; class went into session with a vengeance at the Hard Rock Live in Orlando, Florida courtesy of the trifecta of esteemed professors in Obituary, Carcass and Amon Amarth respectively, rounding out the lineup for The Great Heathen Tour.

Taking the stage first would be Florida’s own favorite sons and proud purveyors of the old ways Obituary, whom brought the fire and fury to their relatively short set like it was 1989 again. Though often noted as pioneers of the groovier and mid-paced mode of death metal known colloquially as death ‘n’ roll, theirs’ was a set dominated by an assortment of high octane death thrashing mayhem that would rival the likes of Slayer and Possessed. The crowd would be in full rage mode by the end of their crushing rendition of fan favorite and instrumental romp “Redneck Stomp”, paving the way for an assortment of furious fare such as recent thrashers “Sentence Day” and “A Lesson In Vengeance” off their 2017 eponymous album, a surprise inclusion of new entry “The Wrong Time” off their upcoming 2023 album Dying Of Everything, as well as a nostalgic rendition of Celtic Frost classic “Circle Of The Tyrants”, which fit in perfectly with their original material. Helmsman John Tardy was a force of nature at the microphone, embodying that late 80s textbookmid-ranged rasp as he worked the crowd tirelessly, while brother Donald was a pummeling machine of precision behind the kit, while the lead guitar assault of Kenny Andrews recalled the glory days when James Murphy’s shred-happy technical work was part of the equation. 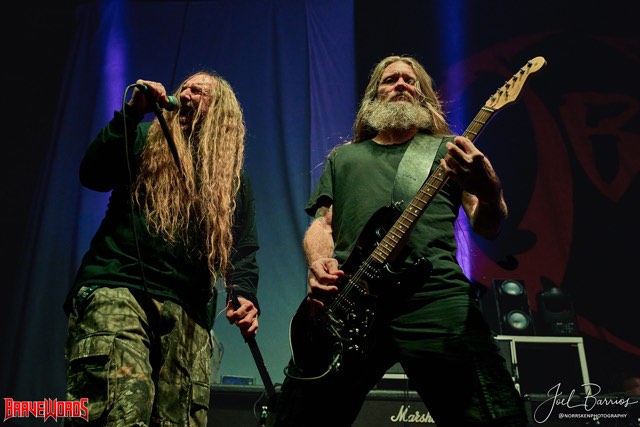 Things would take an equal violent yet more nuanced and cerebral turn with the entry of U.K. goregrind icons turned melodic death metal pioneers Carcass. Though for reasons unknown the band would not allow photographers to shoot the set, what would ensue would prove as much a visual presentation as an auditory one, replete with a heavy amount of smoke machine activity and a continuous montage of footage via two cabinet screens placed at each side of the drum kit dubbed Carcass TV, all of it being an exercise in the surreal and bizarre. By way of contrast, the band members themselves were relatively stationary, with bassist/vocalist Jeff Walker showing the greatest degree of mobility with frequent gesticulations with his instrument. All the bases would be covered in terms of this outfit’s highly varied and extensive catalog, with an occasional even being taken to hit the primitive grinding days of 1988 ‘s Reek Of Putrefaction with an ugly rendition of “Genital Grinder”, as well as the longer and more developed death/grinding ferocity of “Corporal Jigsore Quandary”, though the lion’s share of the set would focus upon the more melodically consonant and progressive twists and turns of recent exploits, with the crowd hitting the apex of elation towards the end of the set when the classic riffs of “Heartwork” filled the air. 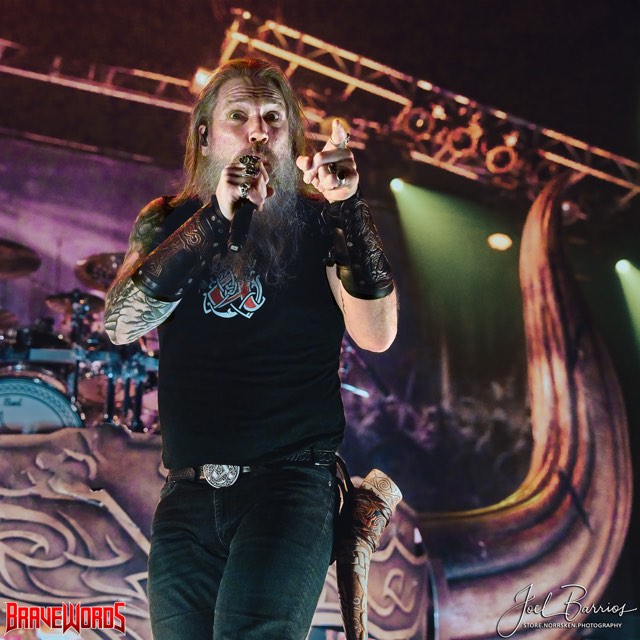 Though the youngest of the trio of classic death metal mainstays to take the stage this evening, melodic death metal titans and disseminators of Viking historical exploits, namely Amon Amarth, were the de facto men of the hour. One overture would prove insufficient, as the band’s entry was preceded by a recording of Iron Maiden classic “Run To The Hills”, a fitting banger to introduce a band that has arguably perfected the concept within a death metal context, and was then followed by a rousing Wagnerian symphonic overture befitting the band’s preferred lyrical subject. While the band’s style naturally caters a bit more to the mainstream concept of symmetrical songwriting with a fairly straightforward structure, this quintet embodied every proper characteristic of a death metal band, from vocalist Johan Hegg’s punishingly deep guttural vocalizations and berserker-like stage presence, to the seemingly endless succession of circular head-banging done by guitarists John Soderberg and Olavi Mikkonen, as well as bassist Ted Lundstrom in a manner that would make Cannibal Corpse proud, to speak nothing for the thunderous drum display put on by relative newcomer to the fold Jocke Wallgren. 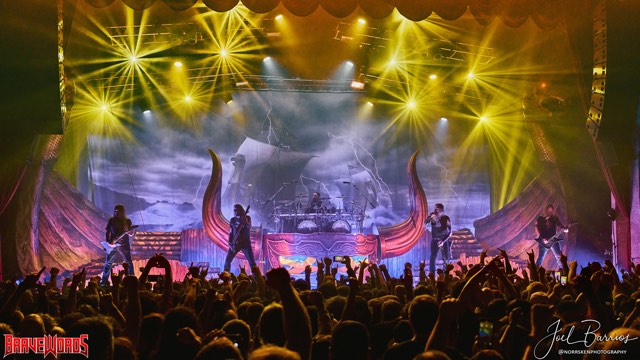 It might be an obvious figure of speech, but suffice it to say; Amon Amarth lived up to the death metal ideal by killing it for their entire hour long set. Fast paced bangers such as “Deceiver Of The Gods” and “Cry Of The Black Birds” riveted the moshing and crowd-surfing masses at every point, accentuated by a blinding fury of strobe lights and utterly infectious melodic guitar lines, with Hegg himself occasionally referencing the goose-bumps that the audience had to have been experiencing at each cadence point. Slower militaristic anthems like “Guardians Of Asgaard” and “The Pursuit Of Vikings” that recalled the fist-pumping classics of Bolt Thrower combined with the somber melodic contours of the Gothenburg style would also bring the house down, though it would be a gargantuan encore performance of smash hit “Twilight Of The Thunder God” that would bring the occasion to a close at a pinnacle point. It was the perfect exercise in epic storytelling combined with the unifying spirit of sonic brutality that ruled the entire event. Arguably the only flaw in this evening of death metal extravagance was that it had to end at some point, but with several dates still to come on the American east coast, the show is not over for this carnival of carnage dubbed The Great Heathen Tour. 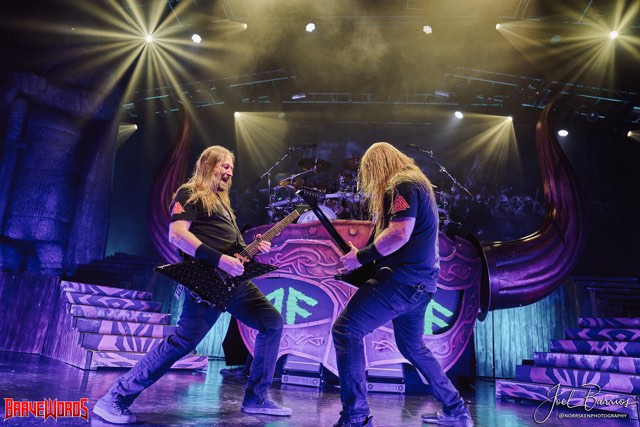