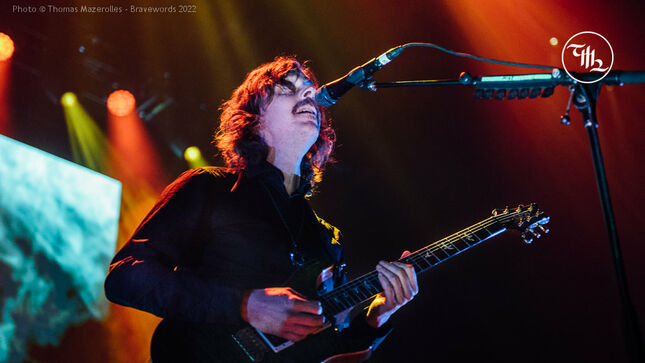 Just from looking at the very long lineup of fans waiting to get in the Place Bell to see Mastodon and Opeth, you can see that this first night of their North American tour is going to be exciting. Khemmis is the opening act of this co-headlining treat.

Khemmis got on stage in front of a good crowd and kicked things off with a song from their most recent album. Their doom metal goes really well with the music style of the headlining bands and many fans were headbanging to the rhythm of their music. With on thirty minutes of playing time, they barely interacted with the crowd and played as many songs as they could. In addition to playing two songs from their last album, the band played songs from all of their previous albums as well as “A Conversation With Death”, a great cover from Lloyd Chandler. The musicians looked very happy on stage and they were very dynamic throughout their set. The only drawback was that the sound was not loud enough, but that did not bother the crowd too much.

Now that the party is underway, the fans could not wait to see Mastodon and they did not have to wait very long before things got underway with the song “Pain With An Anchor” from their most recent album. As one could expect, the band pushed their new album and played six songs from it. They were strategically spread in the set, so it did not feel like they were really focusing on that album per say. The rest of the songs were spread out on the other albums, but “Megalodon”, “Mother Puncher” and “The Czar” were the ones that got the most out of the crowd. A huge screen displayed psychedelic scenes that accompanied each song and the sound quality was simply impeccable. The only thing that was really bothering me was that the musicians were almost always in the dark or barely lit with dark purple lights. But many fans in the pit were too busy pushing each other to notice that. As a co-headlining tour, their set went pretty fast and the band finished with “Blood and Thunder” their closer for the last couple of years. As usual, fans sang and pushed each other like there was no tomorrow. Once again, Mastodon was amazing and fans loved every second of their intense progressive performance.

It was now time for the return of the mighty Opeth after playing Montreal for the last time six years ago. As usual with co-headlining tours, some fans are there to see both bands and other are only there to see only one of them. As expected, while some were anxiously waiting to see Opeth, others were leaving the arena. That being said, fans of Opeth were definitely showing more enthusiasm as the band got on stage than the ones of Mastodon. That came to an brutal stop when the band started their show with the song “Hjärtat Vet Vad Handen Gör”, the Swedish version of the song “Heart In Hand“. This was unexpected song selection and gave a cold shower to the fans. Furthermore, this was the only song from their last album In Cauda Venenum, so its choice was even more questionable. Things got back on track rapidly with the song “Ghost of Perdition” and fans quickly sang the chorus, to the surprise of the band. Fans also sang happy birth day to Mikael Åkerfeldt, as it was a few days ago and that really touched him. He took this opportunity to address the crowd and mentioned that they were happy to play Canada once again and that it was important for them to play as many Canadian dates as possible on this tour. It was interesting to see that Opeth did not focus on their last album, but rather chose to play songs from as many different albums as possible. Once again, the screen in the back displayed animated scenes that related to each song. Unfortunately, like it was the case for Mastodon, the lighting on stage was almost non-existing and musicians were barely visible. As expected, “The Drapery Falls” from the album Blackwater Park, was one of the most appreciated songs and got the crowd hyped for the last stretch of their set. Some fans started pushing each other as others opted to crowd surf. The jazzy keyboard and drum interlude was also well received by the crowd as fans knew that this was the introduction of the “Sorceress”. All good things had to end and fans knew it when they heard “Deliverance”. Once again Opeth was great on stage and fans wanted more but sadly, even the traditional Olé, Olé, Olé, was not enough to bring the band back for a few extra songs.

Nonetheless, this was a great night for lovers of progressive music, but I’m pretty sure fans would have liked separate headlining tours or a co-headlining tour with only those two bands in order to get more playing time out of each of them.