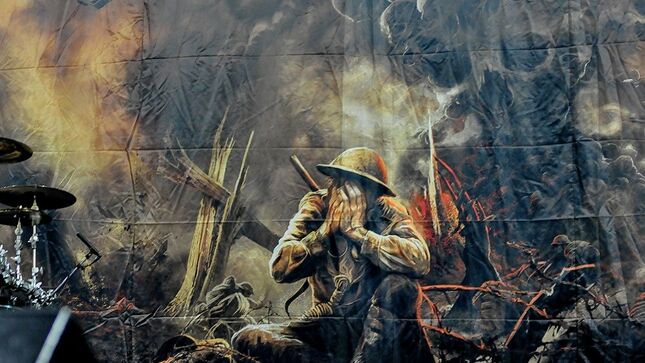 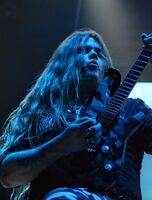 If you've ever (foolishly) doubted the power of the internet, the current setlist by the Swedish military historians is chocked full of singles that (apart from extremely limited and pricey imports) have ONLY been available (usually as videos), via the Net, yet the initial night of the tour (alongside Judas Priest) saw these same gems adopted like longtime friends. In a move that really makes sense in the age of fans' cell phones posting an entire performance, online, Sabaton allowed official photographers the opportunity to shoot any/all of their hour onstage.

Unfortunately, as an opening act, this time around there is no pyro (not even CO2 eruptions) and no tanks. The lone props are a backdrop of the Great War artwork and a few large ammo boxes. Given the parameters, and the fact much of the JP crowd was seeing them for the first time, the reaction was amazing. 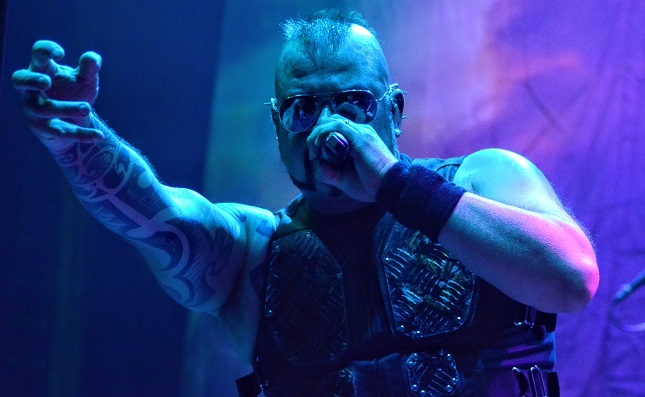 Still fighting jet lag (and news of the recent tax scandal, which apparently prevented a couple of the regular crew from making the trip abroad), Sabaton delivered an enthusiastic evening that won them many old school converts. Hopefully, these new recruits will fall in line with how/why the lyrics are significant. Regardless of era, "Ghost Division" remains one of the greatest opening numbers, as the band charges onstage, led by the cheerleader/body building pose down singer Joakim Brodén, all hair flailing in a whirlwind of activity. OK, maybe now the flak jacketed frontman's Mohawk. Throughout the night, Brodén hammers the air and often crouches down, leg extended to the side, but never losing teh mirror sunglasses, until the final song.

Rather than hit this "new" audience with just a bunch of their biggest hits, the boys opted to perform (much like in Europe) something of a musical, acting out parts and relying on mood, rather than purely speed/volume. Case in point, "The Attack Of The Dead Men", which was up second. After a recorded narrative that outlined the horrors of gas warfare, the band returns to the stage, each donning a replica gas mask. Odd coincidence, since the venue demanded masks, as well as proof of vaccination, prior to being allowed inside Reading Pennsylvania's Santander Arena. The musicians all soon removed theirs, but Brodén (in WWI era uniform/costume) sang from within a masked helmet for the entire tune. Still, can't help but think pulverizing the old Priest heads with the likes of "40 To 1", "Night Witches" or even "Resist And Bite" would open a few more jaded eyes. 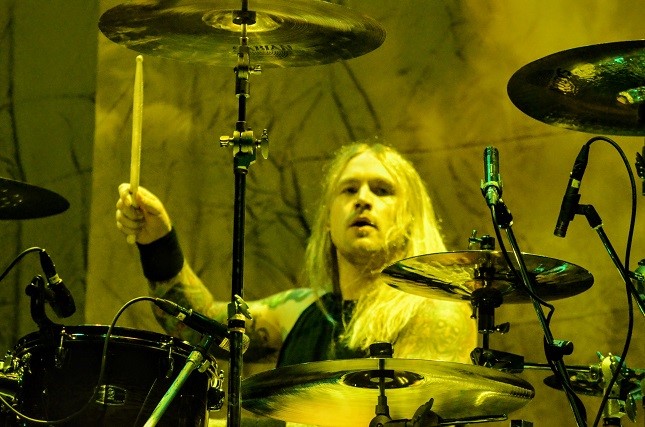 The trio of stringed instruments stood side-by-side, in synchronized stage motions for the beginning of "The Last Stand". Appropriate lighting (guess what color?) for bouncy "The Red Baron", ode to the WWI flying ace. Come the chorus, Brodén dared to ask the crowd to sing along. They obliged. During the guitar break, Tommy Johansson strolled center stage, for his solo. Prior to "Bismarck", the band stood "at ease," arms at their side, hands clasp, behind their backs. During the tale of the gigantic German battleship, co-founder/bassist Pär Sundström swung his four-string in triumphant flamboyance, clearly enjoying himself.

Come "Fields Of Verdun", the singer freely admitted he was a little worried (initially) seeing the chairs, in a seated arena. "We don't have that, in Europe," he began, "but you're all standing up!" He smiled. Those of whom he spoke (the floor seats, now upright) were prodded to clap along, to "Carolus Rex", which afforded guitarist Chris Rörland a center stage spotlighted solo/break. A brand new song (OK, it's was released online, two weeks ago), "Steel Commanders" is a video game tie-in, the band lending their name, music and likeness to a tank battle platform. Despite the novelty, it went down a rousing success (thanks again, internet). 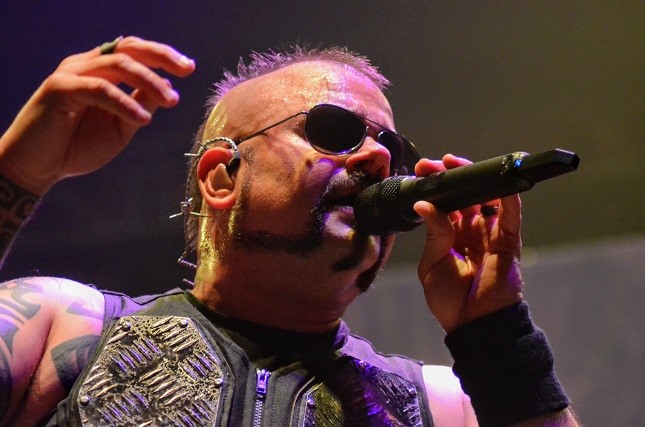 Same goes for "Defence Of Moscow" (sic), which isn't even a Sabaton original! It was issued May, of this year, so much of the set has a "hot off the presses" vibe, sort of a test run, to see how the material translates live, as the band has had only a few (festival) gigs since. In fact, this was its first public airing! The backdrop was highlighted in purple, at the start of this militaristic stomp, where Johansson is given another moment to shine. From the archives, the title track to the debut, 16 years ago (yes, Sabaton are not a "new" band, despite many North American just discovering them), sees the singer (and a few in the crowd) pogo up and down to "Primo Victoria". Know they're pressed for time, adapting to an opening slot, when used to headlining, but hopefully Brodén's personality, as a likeable self-effacing, comedic frontman will not become a casualty of the constraints, as it is truly a part of the Sabaton allure

When finished, he inquires if anyone in attendance has Scandinavian heritage. Eventually someone fesses up to Swedish, Norwegian or Danish ancestry, which cues the green lit "Swedish Pagans". Odd, after a decade of onstage "protests", captured on live albums, as well personally witnessed in-concert, that Brodén offers no mock resistance, but freely embraces the song. It's easy to sing "whoa whoa" chorus works its magic on the crowd. Perhaps they should move it up in the running order, to turn headliner fans' skeptic opinions, in their favor, earlier in the night. As the singer thanks the fans and begins to say goodbye, a western whistle introduces the closing "To Hell And Back". The only thing left, is the final group bow. Then, like feeding hungry zoo inhabitants, there's the distribution of drum sticks and picks, to an eager throng.