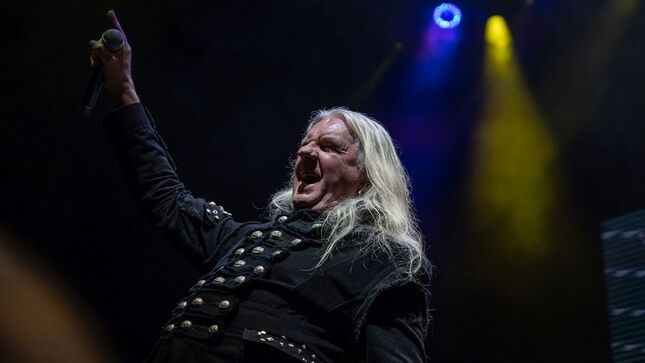 Hammersmith Odeon is a legendary concert venue in London. It changed owners and names many times and for the last few years is called Eventim Apollo, but what is more important, since the 1960s its walls saw concerts by virtually all rock icons you may think of: from The Beatles to Queen, with virtually everybody in between.

So, it was a sort of logical to see here on Saturday evening January 29, 2022 four bands that were the foam on the crest of the new wave of British heavy metal: Diamond Head, Girlschool and Uriah Heep, headlined by Saxon. It seems unimaginable, but, taken together, these bands were performing for over 175 years in total! No surprise the venue was full, from the first row of the stalls to the last row of the gallery.

Because of short time slots, each band had to squeeze their top hits, so this was the evening of the best songs generated by the British metal scene in the last 50 years.

Diamond Head kicked the evening off with energizing setlist that included (relatively) newer songs “Bones” and “The Messenger”, as well as classic “Lighting To The Nations”, “Sweet And Innocent” and “Helpless”, finishing their show with the everlasting “Am I Evil?”. Sadly the organisers were reserving the best light and visual effects for the headliners – this band deserves to be seen at the proper full concert!

Girlschool followed with their show, that sounded like machine-gun burst: “Demolition Boys”, “C'mon Let's Go”, “Nothing To Lose”,  “Emergency” – all the songs that immortalised their names, - and, of course, Race with the Devil and Bomber covers.

Despite starting half of a century ago, Uriah Heep sounded like an energetic modern band, and Mick Box pretty much the same as on his photos from the last century – well, maybe more grey hair, but that’s it.

Finally, Saxon took everybody back to the glory of 1980s heavy metal. On the stage crowned by the mandatory steel eagle, the band delivered a flame-throwing show with their all-time anthems like “Wheel Of Steel”, “To Hell And Back Again”, “Crusader”, and many others.