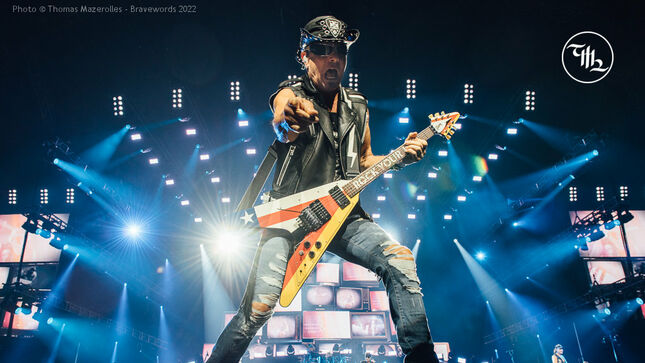 This tour was initially a great twin bill which included Scorpions and Whitesnake and fans were excited to see this tour. But sadly, David Coverdale’s health did not cooperate and Whitesnake had to cancel at the last minute, leaving Thundermother as the only opening act for this tour.

As expected, fans were still getting to their seats in the Bell Center when Thundermother started playing. This tour was their first in North America besides playing a few times on the KISS Kruise. For the occasion, the all-girl Swedish band had a brand-new album called Black And Gold to present us. With a style similar to AC/DC and Halestorm, the girls played three songs from their new album as well as many from their previous records. Fans were cold to their music but gradually warmed up to their rock and roll songs. Lead by signer Guernica Mancini, everyone showed tons of energy and enthusiasm on stage. Few knew the songs, but those who did were rocking as hard as the musicians on stage. Thundermother gave a great show and gained many fans at the same time. I just think that at this moment, their show is more suited for a club instead of arenas.

Many were disappointed that Whitesnake was not part of this tour, but that being said, the place was packed as Scorpions were ready to show the Montreal fans that they still had "Gas In The Tank". Opening a show with a new song is risky and as I thought, the fans were not crazy about the song or simply did not know it, except for a few diehard fans here and there. Things got back to normal quickly as the band followed with hits like "Make It Real", "The Zoo" and "Coast To Coast". That got the crowd going instantly and got them signing along with Klaus. At 74, he still has an incredible voice and I’m sure that the many days off in-between the shows help him keep a healthy voice, but at the same time, it seems that the bad boys were running wild in Montreal during those days because they looked pretty tired on stage.

Once again, the crowd enthusiasm faded away as the band played new songs "Seventh Sun" and "Peacemaker". At this point I am wondering if the usual formula of spreading the new songs throughout the set is a good thing as they are simply not being acknowledged by the fans. Maybe it would be better to play them all in successions and get it over with…

Energetic as ever, Rudolf Schenker slowly got the other band members to find their rhythm and they displayed more energy with each song like they were feeding from the energy of the crowd.

It seems like the show really started when the band played the mega-hits "Send Me An Angel", "Wind Of Change" and "Tease Me Please Me". From that moment on, the energy level never went down. Talking about energy, there is one guy that had a ton of it and he is Mikkey Dee! I have seen him many times with Motörhead and he was a beast behind his kit each and every time. This might be a different band, but you can’t take the animal away from his drum kit. He beats the hell out of it like his life depends on it. He even had a tribute to Lemmy during his drum solo when the wheels of the slot machine stopped and showed his face! The band ended their show with the crowd pleasers "Blackout", "Big City Nights", "Still Loving You" and "Rock You Like a Hurricane".

As usual, some would prefer a specific song over another, but this is not a greatest hits tour, it is a tour for their new album called Rock Believer, so they had to make room in the set list for new songs. With the cancellation of Whitesnake I was hoping that the band would take this opportunity to extend their set and add more songs. But sadly, that was not the case. Instead, we had a show that ended early, and fans that clearly wanted more songs…