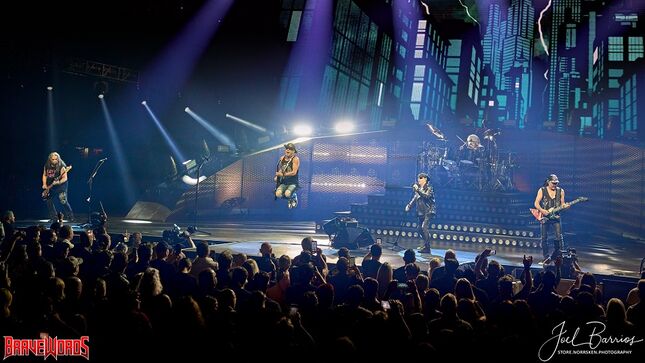 Classics, like a fine wine, tend to get better with age, even if youthful vigor must give eventually give way to a more measured and precise presentation. This is a lesson that several cities in the United States have been learning as German heavy metal icons Scorpions travel the county on the Rock Believer World Tour, promoting their 20th studio LP of the same name in a career that has now spanned more than half a century. To qualify this fold as elder statesmen would naturally be stating the obvious, as the two principle members of this fold are now well into their 70s and the remnant trio whom have been donning the scorpion insignia for varying amounts of time are well beyond the intermediary stages of their careers. Naturally when getting past the awe-inspiring fact that this band arguably begot the entire Teutonic heavy metal scene and were a significant player in rock circles going back to the days of Deep Purple and Black Sabbath, the question becomes “do these veteran rockers still have it”, and on September 12 the residents of Hollywood, Florida received a resounding yes. 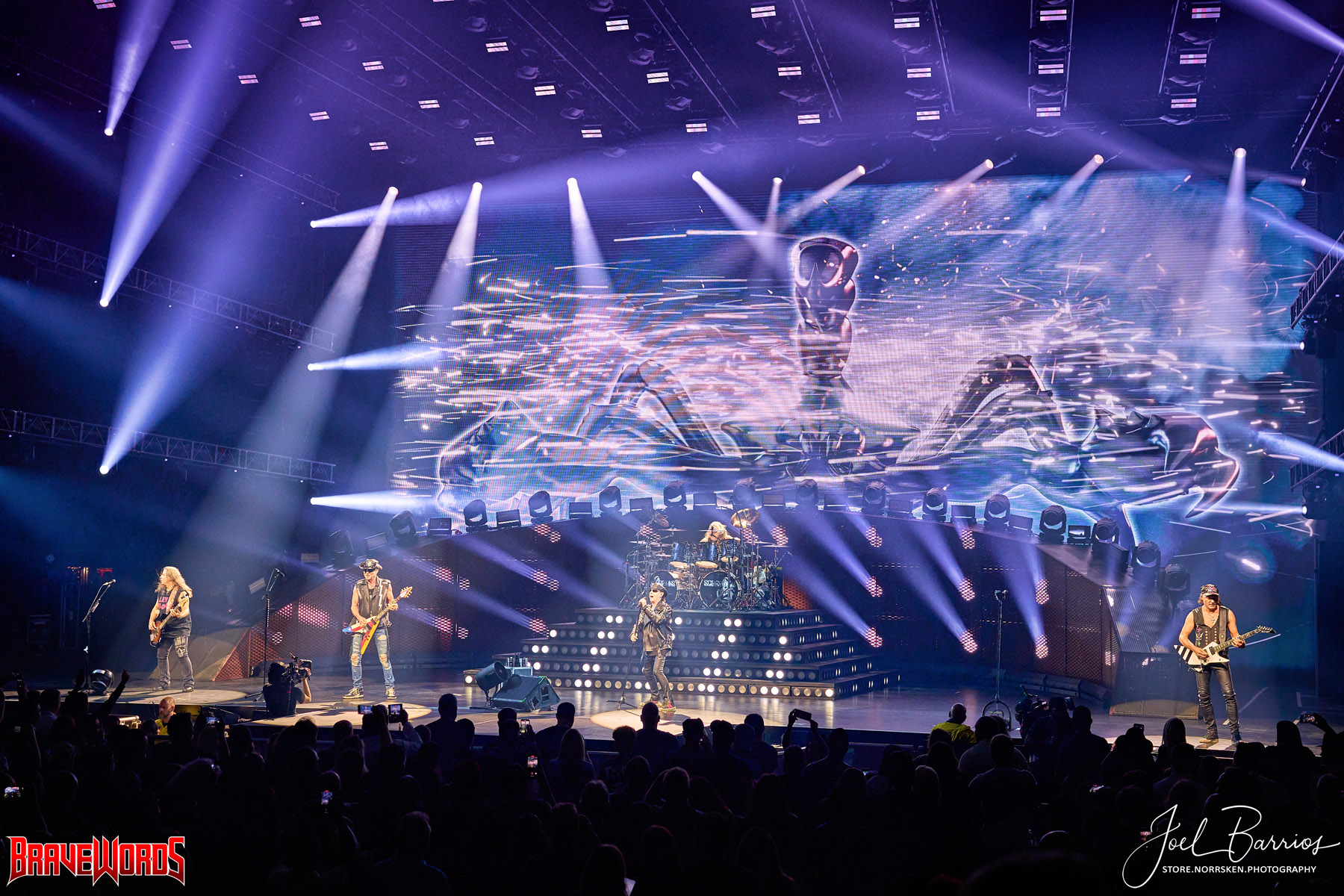 With a stage beneath them large enough to rival the ones that typified that glory days of ‘80s arena rock, this quintet of elite musical surgeons may not have roamed the stage with the youthful exuberance that they did during the mid-1980s, but their operation inspired an equally explosive response from the throngs in the audience. Standing like a stoic statue at the center of everything, longtime helmsman Klaus Meine stood like a stoic statue, but sang the powerful hymn of a determined hero at every point. Guitarist and co-founder Rudolf Schenker and his shred-happy counterpart Matthias Jabs were a tad more animated and took some time to wander about and jazz up the crowd, but their primary focus was laid upon their instruments. Rounding out the rhythm section, the one part of this band that has always been ephemeral from a lineup standpoint; Polish-born bassist Pawel Maciwoda was the most mobile of the fold and proved to be the most technically apt bottom-end to every occupy his role, whereas kit-destroying legend Mikkey Dee definitely proved the most virtuosic of the fold, but took care to measure his technical flourishes to stay in harmony with the band’s more straightforward style. 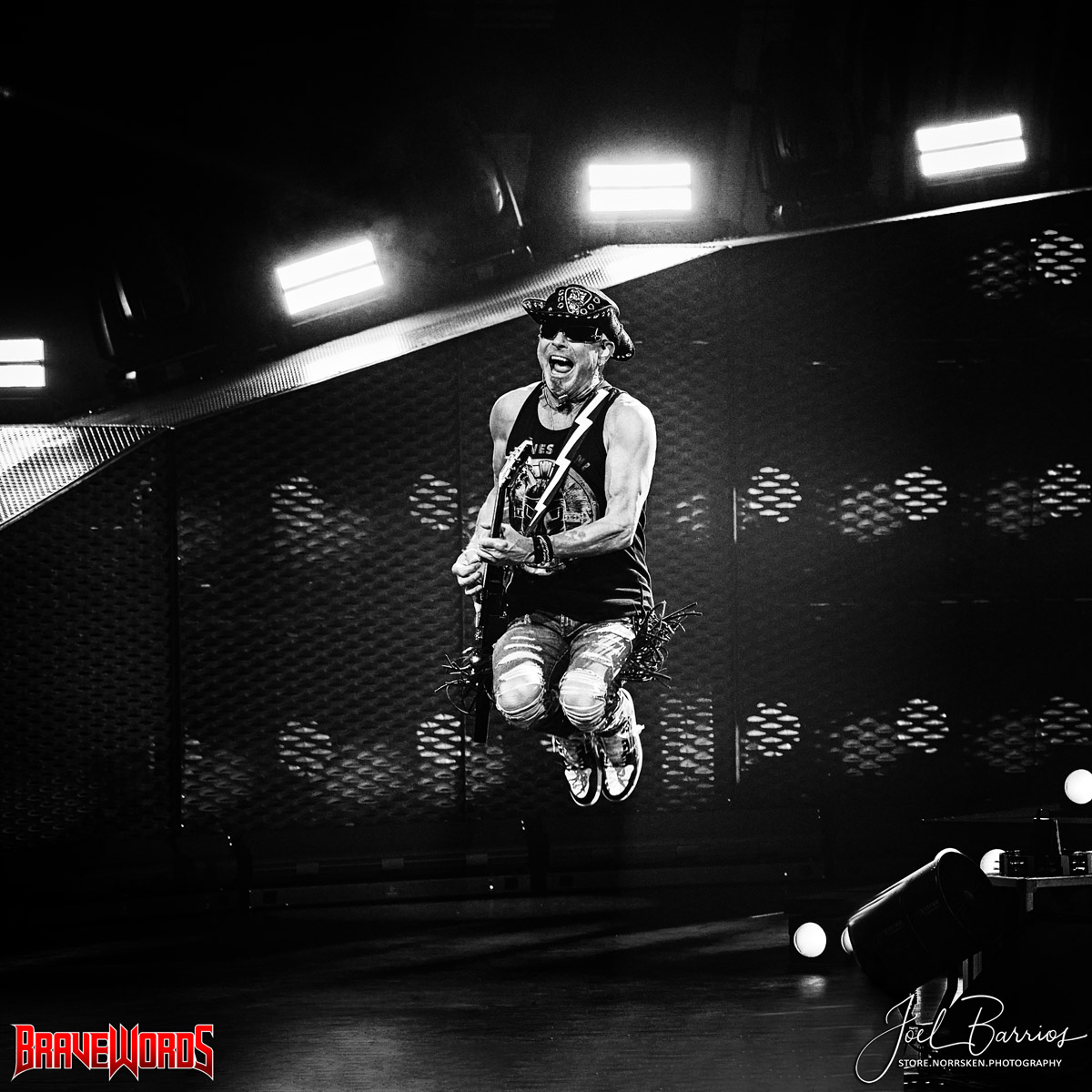 Though it’s a foregone conclusion that anyone attending a concert by a band so deeply established expects a consistent succession of past accomplishments rounding out the lion’s share of the set, this band is still very much an active player in the rock scene and presented several newly minted bangers accordingly. Drawing from the classic ‘80s sound that ushered them into international prominence, the opening fist-pumping anthem “Gas In The Tank” pounded the ground with the heaviness normally associated with the likes of Judas Priest, and Matthias’ flash lead work could have easily rivaled that of Tipton or Downing in their respective primes. The more harrowing march of “Seventh Sun” would bring a more sober, soldier in a distant battlefield type of imagery to the fore, and might have almost been mistaken for something that Dio or Accept might have brought to the table save for Klaus’ cleaner cut tenor. The bluesy rocking “Peacemaker” would showcase this band’s frequent asides into social consciousness, with Klaus explaining the song’s meaning in eloquent terms before the up tempo grooves proceeded to win over an already captivated crowd. Even the more light-hearted sounding ode of musical camaraderie and new album title song “Rock Believer” brought the ‘80s AOR charm like it was back in style. 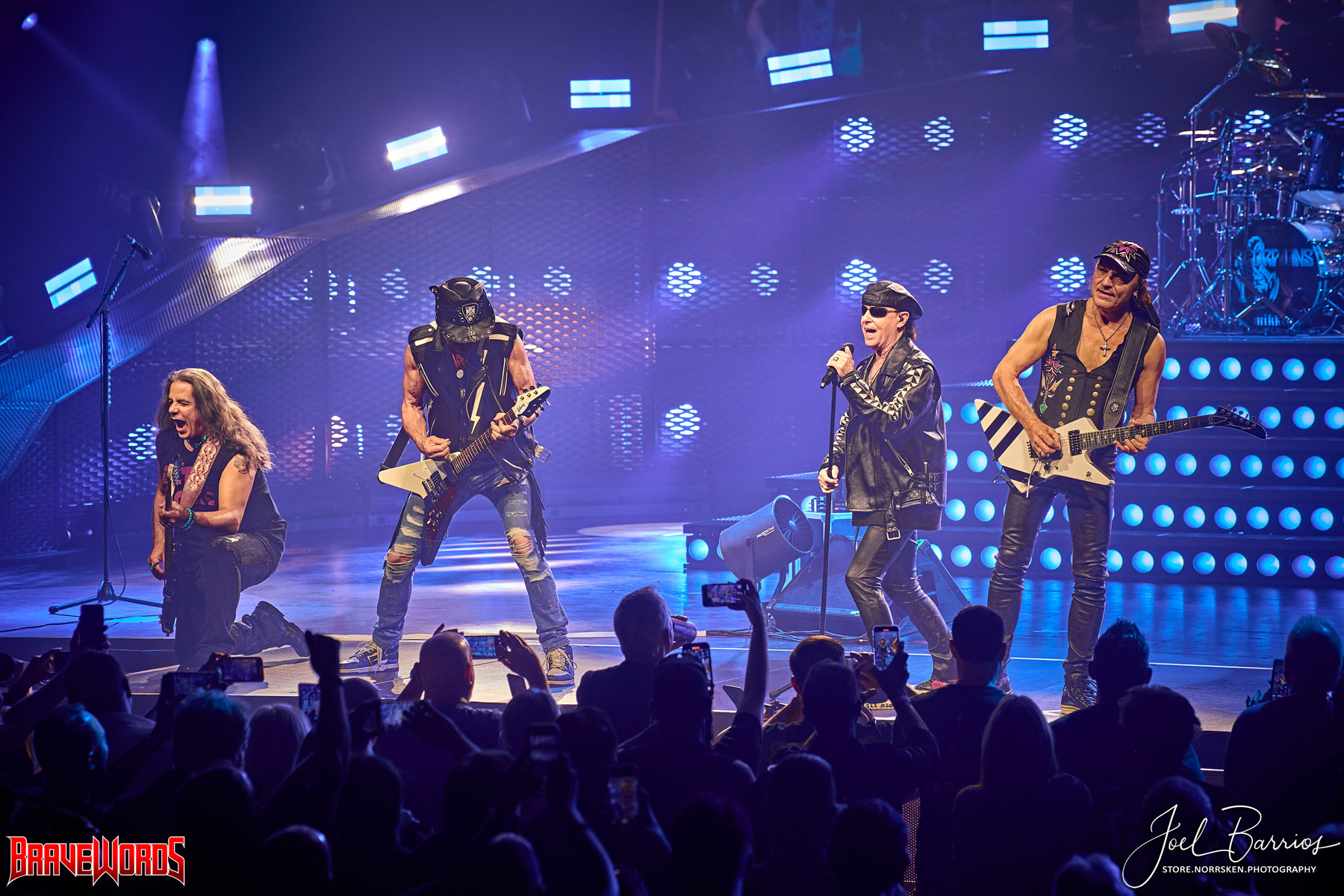 The four featured songs off the new album having naturally convinced most in attendance that it’s a worthy addition to this iconic outfit’s expansive catalog, the bulk of their 90 minute set would be spent cruising down memory lane at full blast. The slow-grooving and punchy 1980 smash hit “The Zoo” would prove an early crowd pleaser, and also afford lead guitarist Matthias Jabs to showcase his ability to bring a technical edge to an otherwise bluesy jam session, complete with a raging talk box effect culminating in a performance that would make Peter Frampton take a step back. Love At First Sting banger and crowd favorite “Big City Nights” would inspire heavy audience response and also afford Schenker the opportunity to take on lead guitar duties to thrilling results. The undeniable gems of ‘80s rock mythology “No One Like You” and “Rock You Like A Hurricane” that rounded out the encore performance and the 1990 rocker “Tease Me, Please Me” would bring even more thunderous applause to the venue, though the most raucous moment had to be the gargantuan drum solo display out of Mikkey Dee towards the end of the set, which also featured some near-equally impressive bass high jinx out of Pawel. 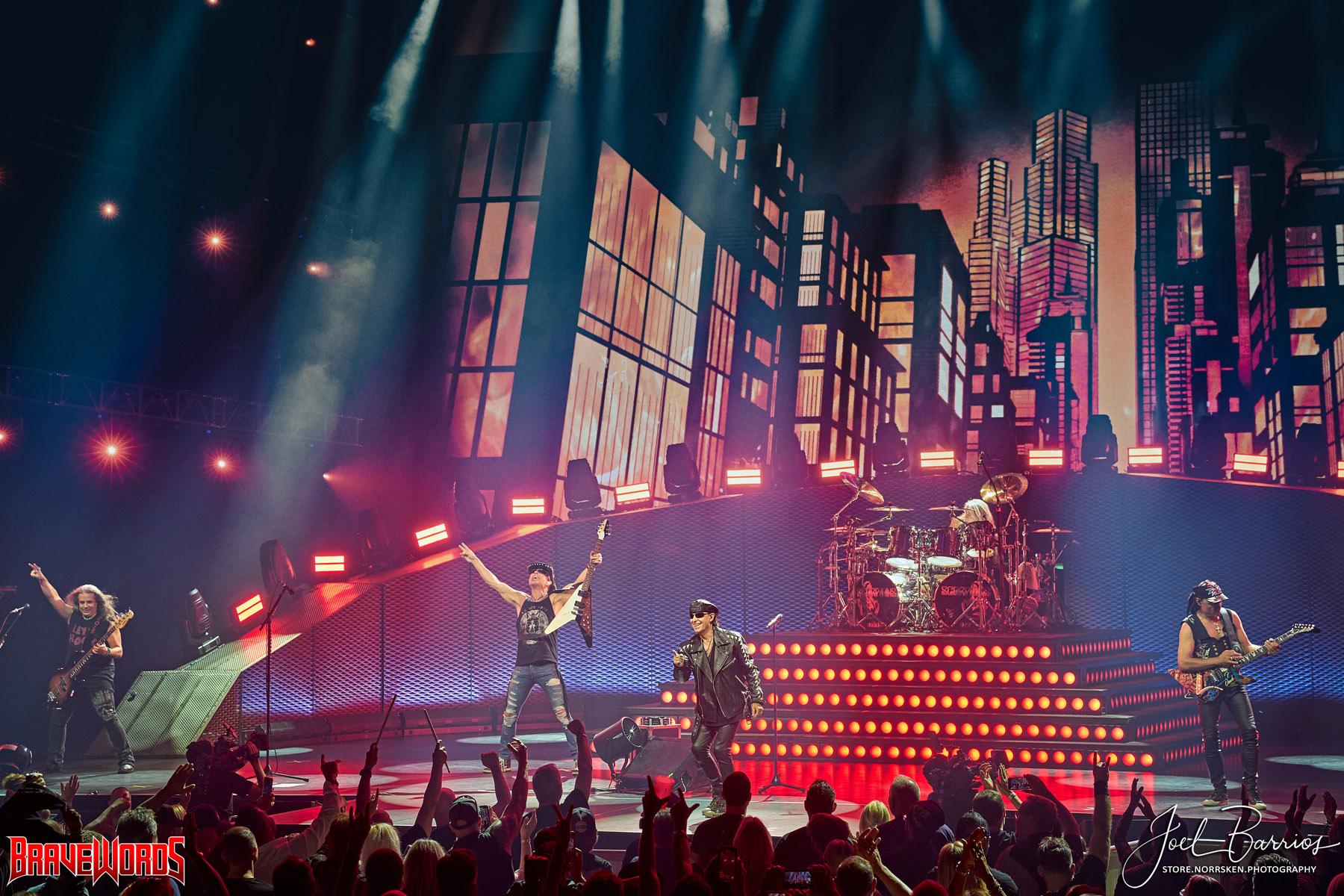 Nevertheless, while the greatest volume level of crowd approval may have been observed during the more aggressive radio hits of the ‘80s, a sizable case could be made that where the most powerful connection between performer and audience occurred during some of the more nuanced and poignant moments. One of these would be the point where Klaus stepped back from the microphone and pick up a guitar to join the rest of the band in rocking out to an instrumental version of late ‘70s deep cut “Coast To Coast”, which also saw Matthias and Rudolf in the rare situation of trading leads while also standing in place of the vocal segments. Then again, the melancholy balladry and haunting vocal display out of Klaus on early 90s entry “Send Me An Angel”, which was answered with a sea of lighters that flickered around the stage like a blanket of stars and a choir of voices resounding from the crowd to fill in part of the chorus, was a sight to behold. But the moment that truly underscored this band’s greatness would be their beautiful rendition of “Wind Of Change”, which was lyrically adapted to speak to the current war in Ukraine, proving that times may change, but the trials that humanity faces and the great music that addressed them do not. 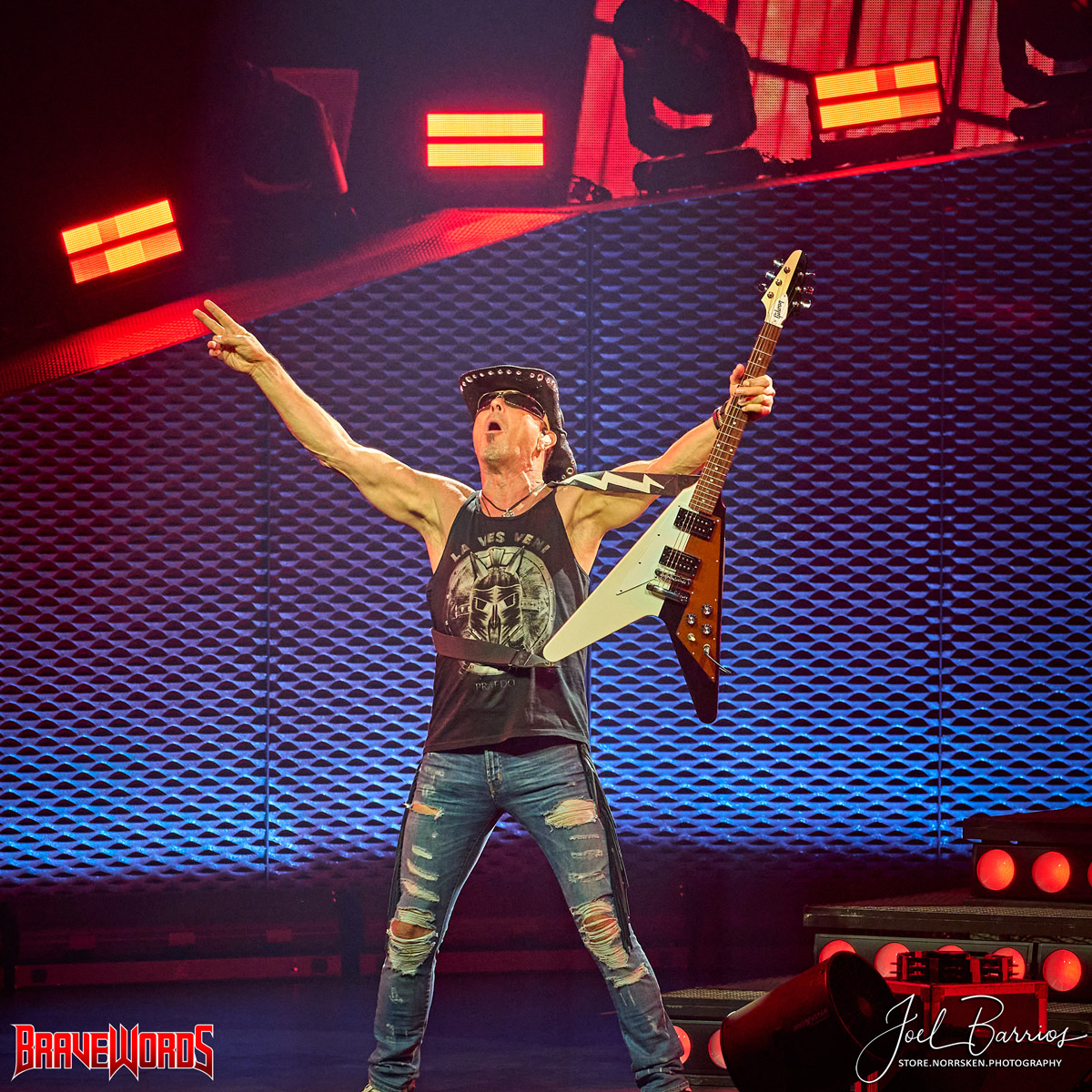 Phrases like “well worth the price of admission” and “this was one for the ages” would fall short of the grand event that was unveiled upon the large and well-lit stage in Hollywood, Florida. Anyone who would say that you’re too old to rock would have been instantly set straight within the first 5 minutes, and though there are more years behind this band than in front of them, they came off as though they still have a few more albums in them before the torch will need a new hand to carry it onward. For his part, Rudolf Schenker was as elated as ever to give his thanks to the crowd at the show’s conclusion with a piercing scream that would have impressed Rob Halford, which would be humorously followed by Klaus noting that he wished that he could still shout like that. It may not have been the most athletic display out of a band to rock an arena, but those who witnessed it came away with enough fire and inspiration to carry them through a massive stretch of this marathon that we call life.