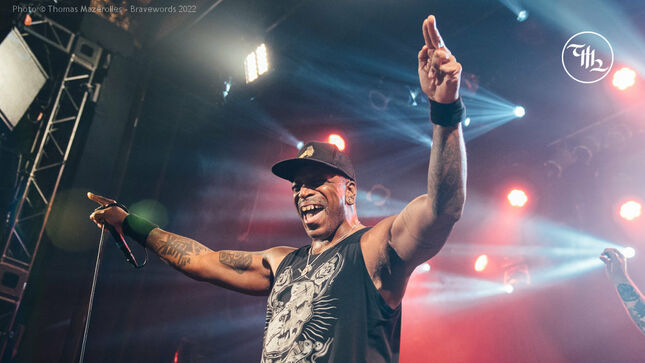 After being postponed a few times, Sepultura was finally back in Montreal for their sold-out show at the Corona Theater. For this thrash metal night, Sepultura was accompanied by Sacred Reich and Art Of Shock, but fans of Crowbar were surprised to see that the band opted not to do any of the Canadian dates on the tour.

Directly of out Los Angeles, Art Of Shock was playing in Montreal for the first time and it was no surprise to see that many people opted to continue to enjoy the warm weather on the terraces while they played. Their thrash music is heavy and fast, but it lacks originality. The band members are pretty dynamic on stage and Art Geezar (signer/guitar player) got the crowd to mosh during the last few songs of their set. Art Of Shock did a great job warming the crowd for the coming bands but they were rapidly forgotten when Sacred Reich got on stage.

Phil Rind and Wiley Arnett got on stage with huge smiles on their faces as they kicked things in high gear with “Divide & Conquer”. The crowd started a big mosh pit as soon as the pounding riff of the song “American Way” was heard. As one could expect, Sacred Reich focused their set list on their more recent album (Awakening) but they intelligently alternated new and old songs to keep the fans on their toes. Being an old school thrash band, Phil asked the crowd to see how old the crowd was, as expected, many were as old as him, but to his surprise, there were also new blood hearing this excellent band for the first time. Wiley was the most dynamic on stage and Phil explained that he could not follow in his footsteps because of his asthma issues and that he would mainly concentrate on his vocals for the night. “Independent” and “Who’s To Blame” were two other oldies that fuelled the long-time fans and gave them an excuse to keep moshing. The band came back with the title track of their last album before playing the heavy riff of the song Ignorance.  After the melodic “Salvation”, the band was back to their more brutal roots with “Death Squad” and “Surf Nicaragua”, their usual set closers. Even if the band kept their fastest songs for last, drummer Dave McClain was all smiles as he was punishing his kit like there was no tomorrow. As one could expect, “Surf Nicaragua” brought a few fans to surf the crowd, a fitting way to end this short set. Sacred Reich is one of those bands that always give it their all and they opened the eyes of many fans that were seeing them for the first time.

Once Sacred Reich removed their gear from the stage, it left it kind of empty with only a few cabs on each side of Eloy’s drum kit. With only a few concerts under our belt in 2022, this refined stage seems like the new reality of bands with regard to touring for the near future, probably a way to cut down on costs. Nonetheless, this was all forgotten as soon as the band played the aggressive riff of “Isolation”, from their most recent album (Quadra). Even if Derrick still has a cast on his left foot; that does not stop him from moving around on stage and interacting with the crowd. The band followed with “Territory”, a crowd favourite that gave even more energy to the most pit. With seven songs from their most recent album, the band chose to play almost all of them in the first half of their set, paving the way for their older hits to be played in succession afterwards. “Kairos” and “Propaganda” were welcomed by fans and “The Pentagram” acted like a well-deserved interlude for those in the mosh pit. As much as I love it when Sepultura play their old songs, I must admit that with only Andreas on guitars, they lack the extra power of a second guitar during those songs. That being said, fans had all the boost they needed when they heard the riff of “Infected Voice”, “Refuse/Resist” and “Arise”. Sepultura came back on stage with their usual set closer, but fans never get tired of hearing “Ratamahatta” and “Roots Bloody Roots”!

As expected, the night was a huge success and it was contagious to see the musicians enjoying themselves so much on stage as much as fans in the pit. There is simply nothing like a good concert night with friends!