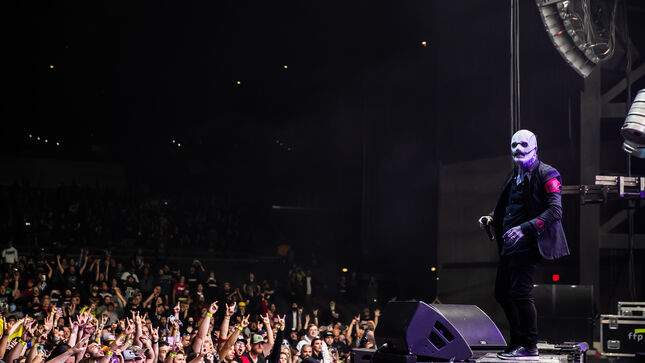 For most of us, the familiarity of wearing a mask is a relatively recent phenomenon. But leave it up to Slipknot to stay ahead of the crowd: they’ve been wearing masks long before it touched the mainstream or became a matter of necessity. In fact, the band was nearly 25 years early with this trendsetting, and they have been soaking up the spotlight ever since. As for their signature titled event, Knotfest will mark its tenth anniversary in 2022. But in the meantime, Knotfest took to the road, knocking the cobwebs off of their tour busses and donning their preferred form of facial coverings.

This year’s Knotfest Roadshow promised to breathe life back into expansive amphitheaters across the United States, with the titular act accompanied on their cross-country trek by the impressive supporting lineup of Killswitch Engage, Fever 333, and Code Orange. Coming from all corners of nu metal, metalcore, and hardcore, this festival spans North America in a multi-month venture before coming to a conclusion at Knotfest Brazil in December.

With straight faces and a razor-sharp edge, it was the duty of hardcore punk band Code Orange to warm up the crowd as the opening act of the night. A battery of famous acts across metal and punk have influenced their sound, yet they carried a unique sonic style that leaned into unexpected transitions in tempo and the vocal talents of more than half their members. Dressed in a barrage of black, this relatively young sextet took the task of riling up the eager Knotfest crowd in stride, facing the warmth of the sun with their early evening set.

Perhaps one of the most vocally unique opportunities of the night, Code Orange has three members contributing vocals, including both multi-instrumentalist Eric Balderose and guitarist Reba Meyers. Heading the act was the icy Jami Morgan, the member also responsible for drums in the studio, but left to tackle vocals alone while on stage. The band recently announced their new touring drummer as Tallah’s Max Portnoy after shielding his identity for the first portion of the tour. Their professionalism was impeccable, for though the crowd had yet to swell to its full potential, they played every minute with the quality expected for a festival of this caliber. And even in these early hours of a long evening, they spurred the group gathered to motion.

This relatively large lineup allowed each personality to shine on stage regardless of role. Where Morgan kept a stony visage and his growls tore like thunder splitting earth, guitarist Dominic Landolina was a lightning bolt of excitement as he darted across the stage on light feet. There was hardly a moment where he glanced at the instrument between his hands, instead throwing his head back and forth and bolting from one side of the stage to the other, often joined by bassist Joe Goldman. The contrast of both reserved personalities with unbridled excitement made their set all the more electrifying, particularly as the sharp punk transitions led to head-spinning tempo changes. Between their non-stop motion and sonic assault across a profusion of instruments, Code Orange did well to set the tone for the night.

Next up was Fever 333, and they brought with them a stark contrast of skills compared to the previous act on stage. Bearing many labels from hardcore through hip-hop through rock, this three-piece carried with them the energy of twice, if not three times as many members. And though it was the emptiest the stage would be all night in manpower, the energetic response from the crowd was far from sedate. Responsible for delivering their politically-charged lyrics and drawing the crowd to its feet was front-man and lead vocalist Jason Aalon Butler. For the duration of the set, he was both restless and relentless, running from corner to corner with the mic in his hand. There were moments where you were left wondering just where he caught his breath - how could he? He jumped to inhuman heights and stomped his feet in time with drummer Aric Improta, giving the impression he was making the ground shake beneath them.

Of course, remaining member Stephen Harrison was just as responsible for drawing eyes. His personality shone clear as he played out to the audience, lingering just long enough for connections to be forged with each note. There was a magnetic allure to his playing style, cool with composure yet vibrant with each new melody. The entire band carried with them such a strong intention as they played it made every song reach its absolute maximum impact, especially the anthemic “Burn It.” This track ignited a fire in the audience even without the use of pyrotechnics, and let Fever 333 truly shine in their impassioned minimalism as they embodied what it means to be larger than life.

As night fell and notoriety increased, it was veteran performers Killswitch Engage who were sent on stage to pump anticipation ever-higher. The metalcore act boasts more than two decades of experience, and this wisdom was evident as they crafted a diverse and engaging setlist for this festival performance. It is natural for the band to lean most heavily into 2019’s “Atonement,” but they also seasoned the mix with fan-favorites from their earlier discography. And to conclude the night, the quintet tackled the challenge of covering Dio’s “Holy Diver.” There was little better way to connect with the crowd that had supported them over their hour of growling and screaming, and they matched the audience word-for-word in the familiar refrain.

There is no other way to put it: Killswitch Engage simply looks at home on stage. Every minute of sweat, each note, is more than some mere performance. The light in their eyes was visible from the very back of the fray, and their production only amplified this. An introduction of blinding lights, largely in sharp neon hues, let songs like “The End of Heartache” hit each climax with an added punch. Guitarist Adam Dutkiewicz was a pure firecracker, shredding and smiling without once slowing down. This punishing pace was met by every member of the band, and they crossed between one another with well-practiced chemistry of longtime bandmates. The performance was fluid, seamless, and the final appetizer before the main course.

With all of the impressive acts that had come before, it was hard to believe the crowning act of the night had yet to arrive. But as the night darkened into pitch, and the agony of changeover time stretched on, the static charge between packed bodies only continued to rise. What had been a meager collection of souls for Code Orange had swelled to an impressive crowd, filling the stadium with a cacophonous din. But then the lights fell to murmurs of anticipation before screams filled the air. It was time for Slipknot to arrive. 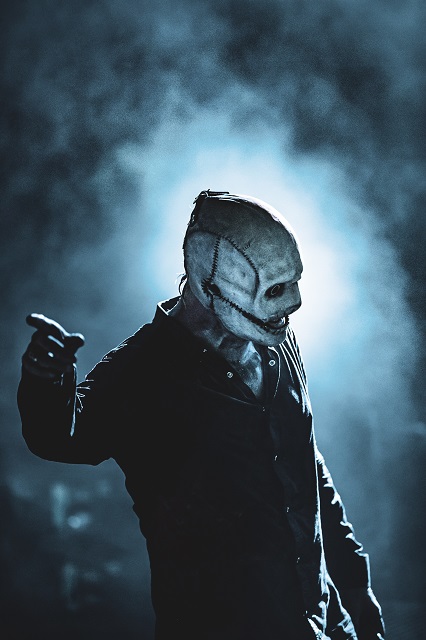 Knotfest Roadshow serves as a long overdue opportunity to promote 2019 album “We Are Not Your Kind.” This album was yet another stellar addition to Slipknot’s storied discography, and as the live performance proved, it is every inch as heavy as the ones that came before. As for the band, despite the years behind them, they proved to be in top form. Vocalist Corey Taylor has kept his sinister growl in pristine condition, allowing its guttural filth to spill each word with amplified venom. Shawn Crahan and Jay Weinberg absolutely attacked the percussive elements, hitting notes with such vigor that it seemed their life depended on it. With the exception of short breathers between songs, this ninety-minute set proceeded with the absolutely brutal onslaught of speed and metallic fury without once letting up.

The more people crammed onto a stage, the greater the potential for eye-catching theatrics, and the greater potential for an unforgettable evening. When you add together Slipknot’s blistering energy, nine members, and a crowd all but frothing at the mouth for their set, their entrance was purely explosive. The scene was set with an impressive array of interactive elements and pyrotechnics, and most of the band was backlit by a wall of lights and screens. Deep oranges and malevolent reds made these personas all the more menacing, which meant for the crowd, all the more delightful. Perhaps most unsettling of all was the suspended percussion platforms, where Weinberg spent much of the set with a bird’s eye view.

Punctuated by bursts of flame and the crackling of sparks, Slipknot indulged in some longtime fan-favorites like the famed “Duality” and endlessly repeated “Psychosocial.” Each recitation breathed new life into these classics, with both the band and fans throwing their souls into the biting edge of metal’s potential. And for the more pyrotechnic-heavy songs, the audience was treated to flamethrowers and fireworks manned by each member in turn. 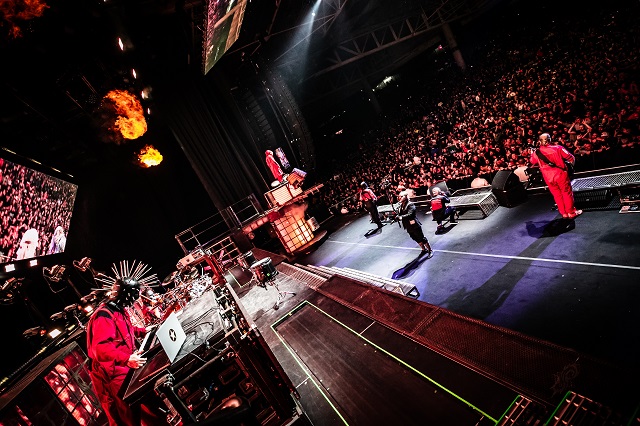 As much as there was a celebration of music and an uplifting of Slipknot’s acerbic legacy, there was also a sense of mourning. Of the many losses suffered in music over the course of the last year, Slipknot founding member and drummer Joey Jordison passed away in July 2021 at age 46. And Slipknot gave the very best tribute they could to his memory: a fantastic show that pulled out all the stops, with a brief homage to a fallen bandmate.

With the promise of a new album on the horizon in 2022, and the last notes of closer “Surfacing” fading, there is little question that Slipknot fulfilled their objective: keep the spirit of metal alive, even if just for another night.