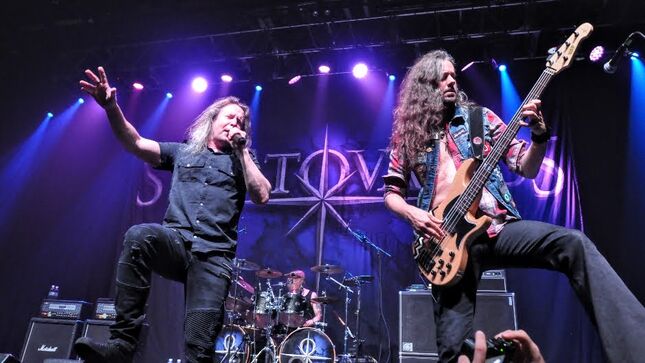 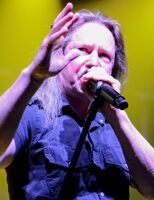 Don't know how many shows the Finns have played since the start of the pandemic, but one got the sense the June 2 headlining set, for the second day of ProgPower USA, was very important to the guys onstage. Early on, singer Timo Kotipelto previewed the night's festivities, saying they'd play, "some old stuff and not so old stuff." True to his word, the final half was almost exclusively "greatest hits." The only disappointment was that they elected not to debut the new "Survive" single, whose video was released the following day. Would have been a grand introduction, but alas, not to be.

While the singer worked the frantic crowd (many seeing a live show for the first time in years), it was bassist Lauri Porra who covered the most ground, when not perched with one foot atop the wedge monitors. Like an overactive spider, his fingers weave intricate (albeit invisible) webs across the strings and adds a few aggro facial expressions, just for good measure. Stage left is keyboardist Jens Johansson (no rubber duckies affixed to the rented keys), another fleet fingered maestro. Spirited "Eagleheart" opener gets the audience even more pumped than they were already. A mid-tempo, pink/purple hued "Shine In The Dark" sees Timo lead the assemblage in a clap-along. Picking up the pace, the bassist, keyboardist and guitarist Matias Kupiainen engages in a little headbanging, to start "Against The Wind". Porra made the first of several visits to Johansson's realm, during the classic "Kiss Of Judas".

Teal lights shine down as Jens is left alone to introduce "Black Diamond" the telltale tinkling of ivories as close to a solo spotlight he'll get tonight, but the fans already know what song is next, even before the rest of the band rejoins him onstage. The bell bottom wearing four-stringer rocks out from his familiar post, then ventures over to Johansson and briefly lends a third hand to the keyboard. "Speed Of Light" blazes by in its namesake timeframe. Center stage, Lorra shakes his flowing mane, plucking the strings. A veritable sing-along, from the first note.

People are still jumping up and down when Timo announces "Unbreakable" will be the next-to-last selection. For the "Hunting High And Low" finale, bass and guitar initially exchange sides of the stage, Kupiainen squaring off with Johansson, face-to-face. Timo practically skips across the stage, leading the cheers (fist aloft for emphasis), and standing on the monitors. Rare a crowd has this much energy left at the end of a concert, let alone a festival day. Timo gets the crowd to sing the titular chorus, comparing them to "drunken Finns" (his words, not mine) and the German metal fans at Wacken. Everyone went home just as happy as if they'd been at some giant overseas event.